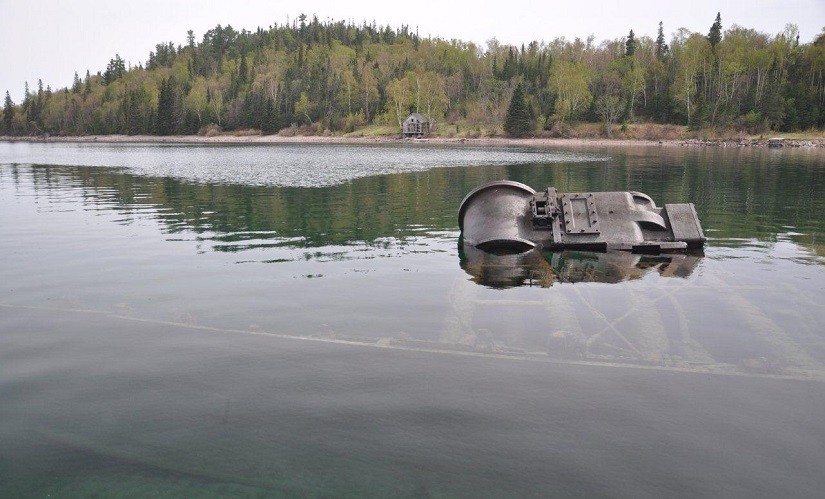 Thousands of boats, ships and canoes have been claimed by Lake Superior over the centuries. The Edmund Fitzgerald is simply the most famous and one of the most recent.

The Charles Hebard was a wooden steamer with a crew of 14 that foundered on the rocks at Point Mamainse, just north of Pancake Bay in December, 1902, and was “dashed to pieces by heavy seas.” The crew made it to shore, while two of the three schooners it was towing made it into the shelter of Pancake Bay. The first of the crew to land rigged up a “boatswain’s chair” on a rope from the ship to the shore, to save the other crew members, including the ship’s cook, Jennie Barnes.

The William O. Brown, a wooden schooner of 400 tons with a cargo of wheat, also went aground on the rocks near Mamainse while bound for Buffalo on November 27, 1872. A midnight gale tore up one of the masts, leaving a hole in the deck. The hold filled with water, and the ship eventually broke in two.

Two of the crew were washed overboard, but five managed to get to shore. Tragically, only three survived the snow and freezing cold. Later they recovered and repaired a small boat from the W.O. Brown. After several days, they sailed the small boat into Batchawana Bay and found a logging camp and safety.

Lord Selkirk’s canoe brigade approached Whitefish Bay in 1816, carrying several partners of the North West Company. These partners were being taken to Montréal to stand trial for their part in the Seven Oaks Massacre in Manitoba. Settlers, including the governor of the Red River Region, had been killed in a skirmish with buffalo hunters who supplied the North West Company with meat for the fur traders and voyageurs. Lord Selkirk, a partner in the rival fur traders, Hudson’s Bay Company, arrested several NWCo partners at Fort William, and had them taken by canoe to be tried. As the brigade of fur trade canoes approached Whitefish Bay, a squall came up over the lake. The voyageurs made for shelter behind Maple Island, on the south side of the entrance to Batchawana Bay. All but one of the canoes made it to safety. The last canoe went down with nine men, including NWCo partner Kenneth Mackenzie. In an ironic turn of events, Lord Selkirk lost his court battle and was in turn sued for the incident. He lost his fortune, and died two years later, a broken man.

High above Lake Superior, the Edmund Fitzgerald Lookout in Pancake Bay provides expansive and breath-taking views of Whitefish Bay to the south, and Batchawana Bay to the east, as well as the rugged landscape of the Algoma Highlands. The Edmund Fitzgerald lies 18 km due west of Coppermine Point, which is the closest landfall, and the best place to see where the big ship went down. To the west, the first lookout points directly at Whitefish Point in Michigan, home to the Great Lakes Shipwreck Museum and the ship’s bell. An interpretive panel on the lookout platform tells the Edmund Fitzgerald’s story, with a compass rose pointing out the direction where the great ship lies.  During the summer, visitors to the park who hike to the lookout (7 km return) can also see Great Lakes freighters passing as they head west to the Lakehead, or south to the Soo Locks. Lake Superior’s storms and shipwreck stories figure prominently in this park’s visitor centre and exhibit hall, aptly titled “The Power of the Lake.” The exhibits feature a scale replica lighthouse that once stood at the mouth of Gargantua Harbour, a model of one of the tugs that plied the park’s waters, facts about the Edmund Fitzgerald, and many strange stories of ships on the Big Lake. The park contains several wrecks, one of which can be seen at remote Gargantua Harbour. Neys tells the stories of Lake Superior’s north shore through several exhibits and interpretive panels in its small visitor centre. The park has many interesting stories to tell, but also displays an artifact from the Edmund Fitzgerald itself:  the ship’s life ring, found on Lake Superior’s shore, far from the site of the wreck. Read more about the wreck of the Edmund Fitzgerald here.

Check out other shipwreck tales here!