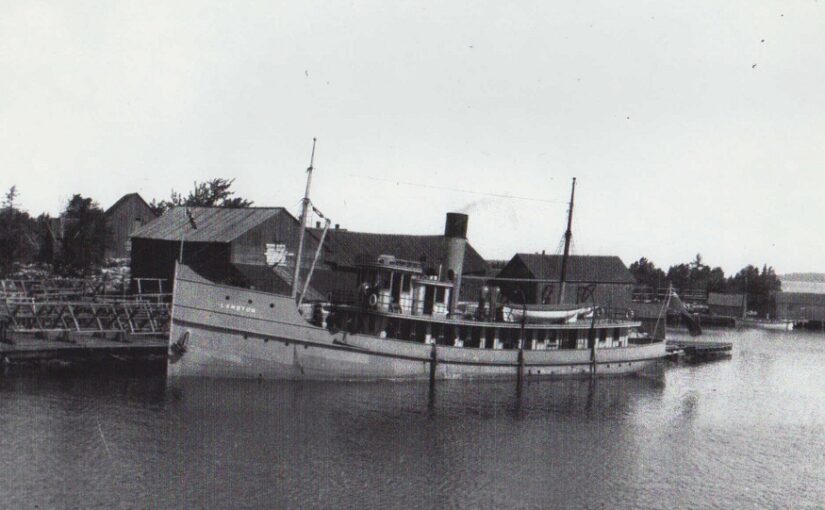 In a time before instant communication, accurate weather forecasts, or GPS, the navigation lights and lighthouses on the Great Lakes helped guide ships to safe harbour through dangerous shoals and stormy seas.

Just over 100 years ago, one ship met its early demise travelling a route which included the shores of Killbear Provincial Park.

This is the tragic story of the Lambton.

The guiding lights of the Great Lakes

The Killbear navigation light was built in 1904 to mark the way to the busy industrial ports of Parry Sound and Depot Harbour. 100 years ago, lighthouse keepers were expected to travel on their own to their stations, and to stay for the entire shipping season. This meant hazardous trips in mid-April and mid-December.

For the lighthouse keepers at the lighthouses near Killbear (Jones Island, Snug Harbour, and Red Rock), this was not usually a huge ordeal.

For the lighthouse keepers on the remote islands of Lake Superior, however, this was a life-threatening commute on the icy waters of the largest freshwater lake in the world.

In 1921 George Penfold was appointed to be the new keeper for the lighthouse on Caribou Island, which is in the middle of Lake Superior.

He complained bitterly about the dangerous situation to the Department of Marine and Fisheries (a precursor to today’s Coast Guard).

The department decided to solve the problem by sending the Lambton to drop off and pick up the lighthouse keepers.

The Lambton was stationed at the marine base in Parry Sound.

In mid-April of 1922 she left Parry Sound with a crew of 22 on board. On April 18 she picked up three lighthouse keepers and two assistants at Sault Ste Marie, and set out for Caribou Island.

She never made it. The Lambton ran into a fierce storm on the night of April 19, and likely sank that night.

On April 22 a freighter reported that the Caribou Island light was not operating. The next day another ship reported seeing wreckage matching the Lambton about 13 miles east of Caribou Island.

Sadly, after a week of further searching, no survivors or bodies were found, and next of kin were notified.

While any shipwreck with loss of life is tragic, this one was doubly so, because it could have been avoided.

He wrote a scathing report warning that the Lambton was completely unfit for the job. Unfortunately, his supervisors ignored him, and 27 men died.

Among the dead were six Parry Sounders, a huge blow for the small coastal community.

One hundred years later, the story of the Lambton has faded from general knowledge.

Today, you can see the Killbear navigation light by hiking the slightly misnamed Lighthouse Trail to the tip of Killbear Point. During the summer you’re sure to see small recreational boats enjoying our part of the beautiful 30,000 Islands.

Since Parry Sound is still an industrial port, you might get lucky and see a lake freighter bringing road salt, a cruise ship carrying 200 passengers, or perhaps a Coast Guard vessel returning to base. We hope you enjoy your visit to the light, but while you’re there, perhaps you can spare a thought for those that never returned.

To learn more about this tragedy, including the names of the lost souls, we recommend this article. The original was written by Patricia Madigan, the granddaughter of the man who tried to prevent this disaster.