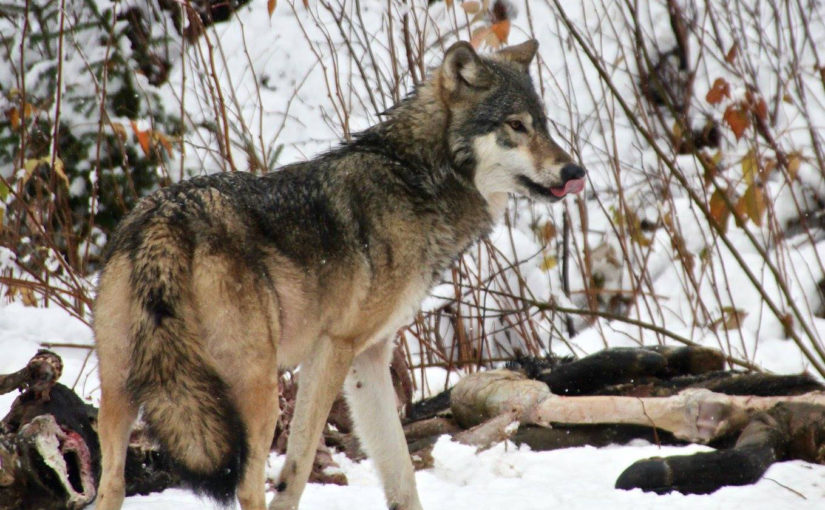 The arrival of snow and ice transforms the rugged landscape of Lake Superior Provincial Park into a stunningly beautiful, albeit unforgiving place to live.

As temperatures drop, the park can accumulate up to six feet of snow in the interior. The snow makes just about every aspect of an animal’s life more challenging.

Northern winters are a true test of an animal’s fitness. Let’s look at how they adapt to survive long, harsh winters. Wildlife has an amazing variety of strategies to survive this harsh season.

Many birds migrate south to warmer climates to avoid the challenging conditions altogether. Other animals hunker down and slow their metabolisms to hibernate until spring rolls around. The active animals in the winter must be cunning and resourceful to endure this long and cold season.

Some, like the Red Squirrel or the Canada Jay, rely on stores of food collected before snowfall, called caches. Others impressively continue to forage for food despite the ice and snow. Snowshoe Hares browse evergreen branches, managing to stay on top of the snow thanks to their large feet which distributes their weight. Moose will trudge through the snow with their long legs, remarkably sustaining their enormous bodies with a diet of twigs. Then there are the predators. Wild hunters that must seek out animal prey in order to survive. Today’s human hunters harvest wild game from the forest, but need not worry if they come home empty-handed. We are fortunate enough to have grocery stores we can rely on for food.

This is not the case for the predators of the forest.

The animals that live here have adapted to be skilled hunters even in deep snow. However, the prey is much more difficult to locate and capture in winter.

Hunting in the snow also consumes more energy. Conserving energy is everything in the wild, especially when you’re not sure when you’ll find your next meal.

Many people think of scavenging as the realm of specialists, like Turkey Vultures. In reality, a surprising number of predators will turn to scavenging when the opportunity presents itself.

This is especially true in the winter when they experience a considerable amount of food stress.

Waste not, want not

Despite their impressive adaptations, winter is a challenging season for all animals.

Their bodies demand more energy to move through the snow and stay warm, yet sources of nutrition are more challenging to obtain. The brutal reality of a Canadian winter is that many weaker animals do not survive, and starvation is relatively common. Back in November of 2011, park staff found the remains of a moose harvested by human hunters. Staff decided to set up a camera to observe what happens to the bodies of these animals after they die.

The hope was that this trail camera would give us a glimpse of some of the animals that would come to scavenge. We were not disappointed!

In just a few days, the camera captured no fewer than seven different species scavenging at the site!

A Pine Marten is the first to be captured by the camera, having managed to sniff out the snow-covered Moose carcass.

The small ground-dwelling rodents that these weasels prefer to eat are among the least negatively affected by a thick blanket of snow. The snow insulates them from the colder temperatures, and provides cover from predators.

In winter, Pine Martens often search for prey in snow-covered spaces under woody debris. Here we can see it digging out some rather substantial chunks of meat, which is impressive considering the moose is at least partially frozen.

The next day a Rough-legged Hawk discovers the now partially exposed carcass.

The hawk doesn’t stick around for long, perhaps finding the meat too frozen for its liking. In the winter, these carcasses must be consumed quickly before the flesh freezes entirely – usually within 12-48 hours.

A group of Common Ravens are the next to arrive to dine. Upon discovering a carcass, ravens display some rather interesting behaviour. Juvenile, unpaired ravens will call loudly to attract other individuals of their age group to the feast.

This seems surprisingly generous, until you realize that to the young ravens, this is not only a buffet, but also a singles’ mixer. This is an opportunity to show off in hopes of finding a mate. Resident pairs of ravens, on the other hand, tend to quietly enjoy their meal without drawing too much attention to themselves.

Soon, a number of Bald Eagles appear on the scene, and we can see a pecking order being established. The eagles are initially somewhat aggressive and possessive of the carcass, but they soon settle in and allow the brazen ravens to eat alongside them.

Several days later, the camera is triggered by a Fisher investigating the sparse remains of the kill.

The Fisher, whose name is deceiving, actually does not prey on fish. They primarily hunt Snowshoe Hares, squirrels, mice, voles and shrews. They will occasionally prey on birds and are also one of the few predators capable of taking down a porcupine. Like most other carnivores, they will readily eat carrion if they come across it.

A Red Fox is caught at the scene the next day. These animals are primarily solitary hunters and are known to be very opportunistic.

A few days later still, a Grey Wolf makes an appearance. Wolves are pack animals that hunt in groups taking down ungulates such as moose. However, a third of their diet is made up of smaller mammals such as beavers, hares, squirrels, and mice. This individual is obviously not about to pass up a free snack.

Ironically, in mild years when winter mortality is low, wolves play a key role in helping to sustain other scavengers. When they abandon their kills after they are full, the leftovers provide a buffet for other local scavengers.

In the springtime, insects and rodents will eventually devour the entire skeleton. If you happen upon a bone or antler in the forest, you may see evidence of this nibbling.

Observing a scavenged carcass is not only an exciting opportunity to view interesting animal behaviour, but also an opportunity to reflect on the beauty of the resilience and interconnectedness of life.

In the wild, death — even of a creature as majestic as a moose — is not a cause for mourning, but a celebration of life. The nutrients that made up its body will go on to sustain many other animals, taking endless other forms throughout time.

While the habits of scavengers may be gruesome, they remind us we too are a part of the beautiful web of life.