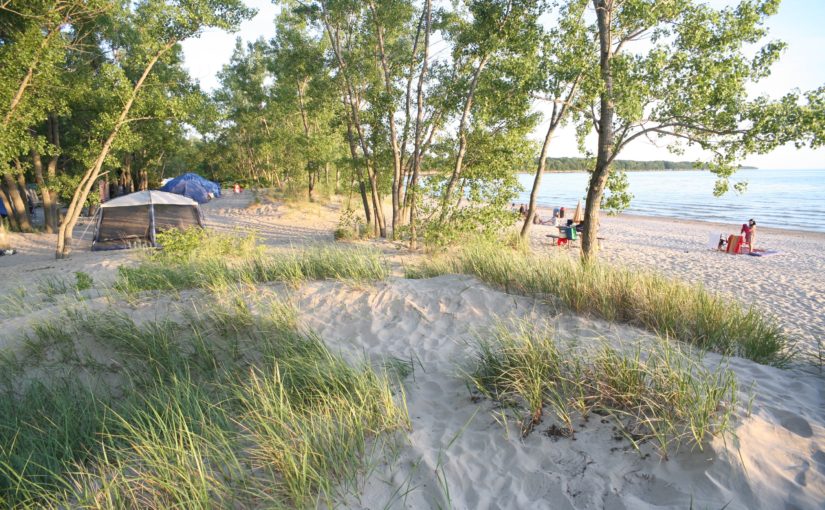 In celebration of Ontario Parks’ 125th Anniversary, Sandbanks Provincial Park is working with local students to rehabilitate one of its most important namesake features — the dunes!

Sandbanks has the largest freshwater baymouth barrier dune system in the world. It’s an important habitat to protect and park naturalists work every day to educate people on the importance of this system.

The dunes need the grass

The dunes can only remain stable when appropriate vegetation grows. This includes smaller plants such as Wormwood and Star-flowered Solomon’s Seal, but also larger ones like Sand Cherry and Eastern Cottonwood.

The “super-hero” of Sandbanks, though, is Marram Grass, perhaps the first plant to wash up on our sandy shores thousands of years ago.

The dunes are dry, hot, shifting and nutrient-poor — difficult conditions for most plants to survive in. But Marram Grass has special adaptations that allow it to thrive here at Sandbanks. Its lengthy net-like root system and underground rhizomes stabilize the sands around it, making it easier for other pioneer plant species to take root.

These early dune colonizers have special adaptations which allow them to live in this harsh environment. As these plants grow and die over several generations, they add nutrients to the soil and help to stabilize the area. Eventually, larger and more varied plants can grow.

You wouldn’t expect it, but…

Ironically, while these plants have to be tough to survive these conditions, they are also very fragile, easily killed when trampled. High water levels last year left our beaches narrower than usual and because of this, park visitors created trails in the dunes directly behind the beach, inadvertently damaging the plants needed to stabilize the dunes. Because with nothing to hold the sand in place, it simply blows away. Our rehabilitation project began with visits to local schools. We wanted to help students understand the importance of Sandbanks, what it protects and why Marram Grass is so important.

Students were then invited to the park to help us plant Marram Grass. By the time we were done, a significant portion of the dunes on both sides of the Outlet River were planted. Fencing and signs were also erected to direct visitors away from planted areas and onto designated trails.

Sandbanks is more than just “the beach”

Through these efforts, we taught students that Sandbanks is more than just “the beach,” and many students were inspired! One student initially expressed  disappointment when learning that her class was taking a field trip to the beach…only to plant grass. Later, she exclaimed that she now understood the importance of what she was doing.

Sandbanks is truly an amazing park, and this project has been an opportunity to instill the passion and respect we feel for our park, to the youth of our local community.

Thanks to all who participated and helped to rescue the dunes at Sandbanks Provincial Park!