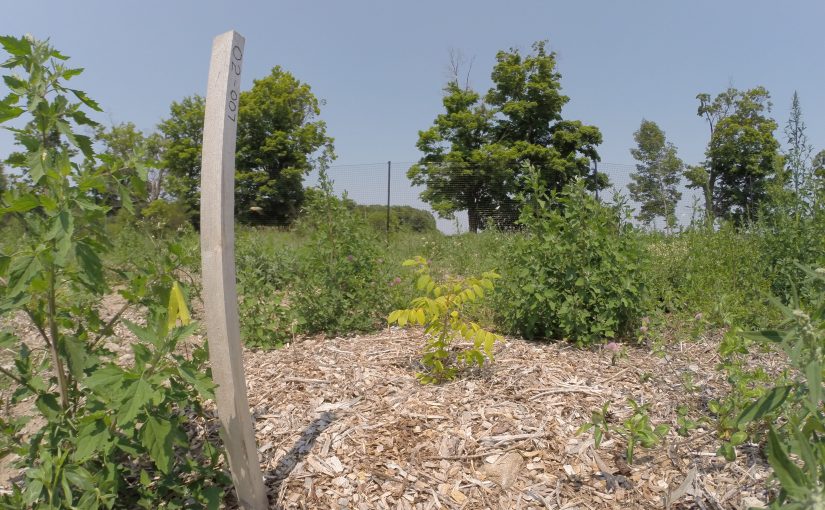 When it comes to tree-planting, Sandbanks Provincial Park goes all out.

But did you know this Prince Edward County provincial park rescues trees, too?

The park uses an arsenal of traps, invisible fences, GPS and companion trees to target diseases and insects that attack Ontario trees.

Take the Butternut, for example.

This endangered tree is heading for extinction because of a nasty fungus called Butternut canker. There are only 113,000 trees in the province, and 90 percent of them are infected.

Once a tree catches Butternut canker, there’s no treatment or cure. It’s usually just a matter of time.

Tree specialists have now discovered that some butternuts are resistant to canker. They fight it off like you might fight off the flu.

Scientists want to produce as many of these disease-tolerant trees as possible, and study them. Do they pass on their resistance? If so, seeds and grafts from hardy trees could produce an army of butternuts strong enough to survive.

That’s where Sandbanks comes in. The park has planted 100,000 trees over the past decade. Among the plantings are two butternut groves, with a combined total of 200 trees. It wouldn’t do to have hungry deer eat the research.

So, the park has barricaded the young trees behind deer fencing to protect their tender, tasty tops.

Deer could easily leap these black eight-foot fences, but they won’t. They can’t see the colour black well enough to take the chance.

There’s just one problem with putting up these “invisible” fences—the deer could crash right into them. The park attached white ribbons to the fencing, so deer have no trouble seeing them fluttering in the wind.

Bodyguards and a bit of TLC Butternuts are the most pampered trees in the park.

They are planted with low-growing companion trees. These unselfish guardians protect the butternuts from wind and keep their feet cool and moist, while their sun-loving buddies soak up the sunlight.

The park even weeds around them and waters them during drought.

Sandbanks doesn’t pick up the tab for this special treatment. Local solar farms fund the planting and care of these vulnerable trees as part of their commitment under Ontario’s Endangered Species Act.

Some solar companies needed to remove endangered butternuts from their land. The trade-off? Planting about 20 seedlings for each protected tree removed.

Sandbanks and the Friends of Sandbanks Provincial Park organization offered to provide a home for the new trees, says Park Superintendent Robin Reilly.

“It had to be somewhere local that would maintain them over a long time. Once planted they can’t be disturbed,” he said. “They have to make sure the trees survive for five years, or they have to replace them and start all over.”

It was a win-win situation. The infected solar farm trees were replaced with healthy seedlings that may be disease-resistant. The young trees could get no better care than in the devoted hands of Sandbanks’ staff and Friends.

The park recorded the GPS location of every tree. Each one gets observed and studied to track how well it survives and reproduces.

“In essence, they are a mini ‘test forest.’”

How’s it going so far?

“The trees we’ve planted have shown a genetic resistance to the disease so far. They come from three different resistant parent trees. Part of our research is to determine which of the parent trees conveys the most resistance to its offspring.” Sandbanks has taken such first-class care of their butternut babies, that they’ve expanded their tree care.

Sandbanks has been offered a chance to adopt some American Elms which are resistant to Dutch Elm Disease.

The fungus behind Dutch Elm Disease arrived in North America in the 1930s. By the 1970s, it had wiped out most of the elms in Eastern Canada.

“We have four planted now behind the fence with the Butternuts,” says Robin. “We expect a robust project with Guelph University next year, once they have enough seedlings to share.”

Of course, these elms will also need to be pampered (and observed and studied).

Staying a step ahead

Sandbanks is already gearing up to battle another devastating invasion—the Emerald Ash Borer. This invasive beetle has destroyed millions of ash trees in Ontario.

It lays its eggs in cracks and crevices of the tree. When the eggs hatch, the larvae burrow under the bark. By the time a tree shows any damage, it’s probably too late to save it.

The Emerald Ash Borer hasn’t been spotted at Sandbanks yet, but the park has an active monitoring program.

Glue-coated green prism traps hang near the top of many trees, suspended from the outer branches. If the pests enter the park, staff should spot them in the traps.

How can you help?

The Emerald Ash Borer has been found throughout southern Ontario.

Want to help keep it out of Sandbanks? Don’t bring firewood from home. These invaders can hitch a ride on it.

Instead, buy your firewood and kindling at the park. Get only as much as you need and leave behind any leftovers.