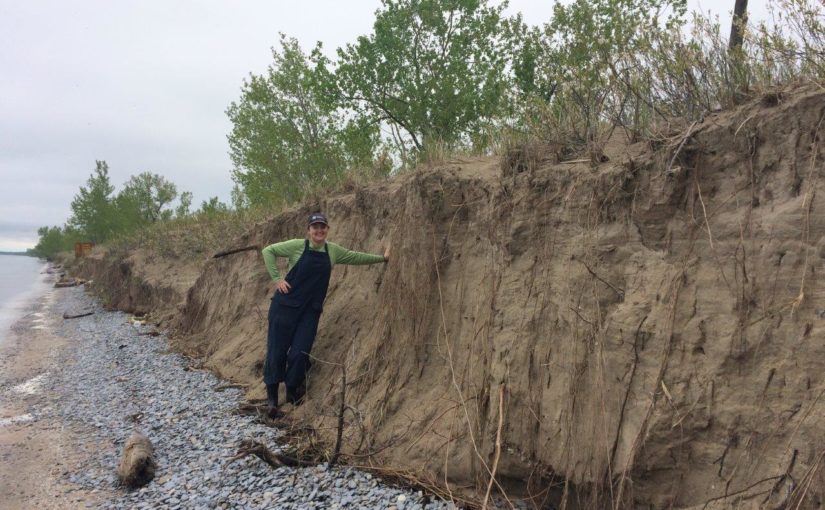 Yes, there were some negative effects, particularly from a human perspective.

Richardson’s Campground, along with a few other individual campsites, was closed for the early part of the camping season.

Some parking spaces, always at a premium on busy beach days, were flooded.  Sandbanks Beach – now referred to as Lakeshore Beach – was closed for the entire summer: it simply wasn’t there, as high water levels eroded away the shoreline.

Both the Dunes Trail and Cedar Sands Trail were closed as they experienced massive flooding.

It’s important to remember that this was primarily a natural event: fluctuations do occur naturally, causing changes to the environment that we might initially think of as detrimental.

Sandbanks’ pannes are a globally rare habitat characterized by, among other things, a lack of fish, which is important to some of the aquatic species that live there. But with Lake Ontario overflowing, water – and fish – poured into the pannes.

As a Park Naturalist, I was initially shocked and dismayed to see fish in this habitat, throwing the “natural” balance out of whack. But fast forward to this year, lake levels are more “normal,” and the fish are no more: the shallow panne waters freeze solid in the winter and nature got rid of the problem. The flooded parking areas were well used by frogs and toads, calling lustily for mates and resulting in a great breeding season.

Frogs and toads were seen and heard more commonly this year and the opportunity provided by the high water levels will have a positive effect on these amphibian populations for many years.

Change is in the air

Some of our park visitors this year have also commented on the many dead and dying trees they’ve seen. Pines and cedars seem most affected, but why? Is it a disease?

Turns out, most trees don’t like living in wetlands, which is where many of them found themselves for much of last summer. With roots not intended to be underwater for long periods of time, many trees simply didn’t survive.

But that’s okay too. In forests, these trees will be replaced by saplings that have been patiently waiting for sunlight to hit the forest floor so that they can grow tall.

Others were growing near or in wet areas, and when they die, it re-opens the area up and ensures the wetland habitat continues.

Without some intervention – high lake levels, people or beavers to name a few – wetlands will often gradually fill in and be replaced by a more terrestrial habitat.

Last year’s flooding refreshed our wetlands, which are now stronger than ever. You need only look at the flower display in Sandbanks’ pannes this year to see how well they are doing.

The display was one of the best I can remember: clumps of white Ladies’ Tresses orchids amidst the gorgeous blue and purple hues of Kalm’s Lobelia, Purple Gerardia and Fringed Gentian.