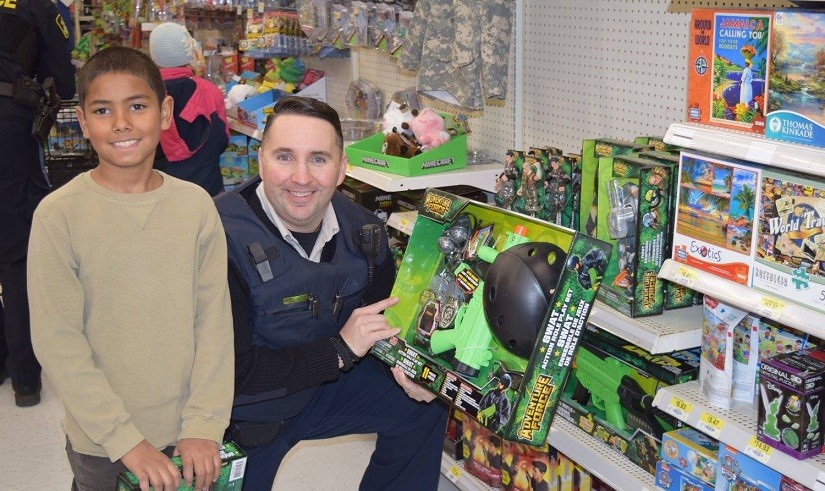 When a good friend and colleague of mine invited the Rondeau enforcement staff participate in the 2015 Shop With A Cop Event, I confess I had no clue what he was talking about.

But as I listened to Sgt. Brian Knowler of the Chatham-Kent OPP Detachment describe Shop With A Cop, I could see a big smile developing and the level of excitement rising in his voice. This was obviously something that was near and dear to his heart. Brian started Shop With A Cop several years ago. Working with the local Children’s Services, Big Brothers/Big Sisters and Victim Services Ontario, a select group of children are chosen to spend a morning shopping with a police officer to buy Christmas presents for themselves and their families. Purchases are made using $100 gift cards that are paid for through community donations.

Before Brian could finish telling me the rest of the story, I blurted out, “Count me in!”

Later on, I asked my enforcement staff whether they would have an interest in participating. Not surprisingly, they all responded before the end of the day that they wanted to be a part of Shop With A Cop.

So on a very chilly Saturday morning, Dec 19th, the Rondeau team gathered at the park around 5:30 AM, ready to get on the road. Our maintenance staff had worked tirelessly the day before to ensure that our park enforcement vehicles were cleaned, detailed and ready for the event. As our little convoy journeyed down the 401 towards Chatham, I kept thinking about the event, wondering what the kids would be like and how things were going to unfold.

When we arrived at 6:45 AM, officers from the local OPP detachment, Chatham-Kent Police Services, auxiliary officers from both services and MNRF Conservation Officers were all there waiting for the briefing to begin. Over 50 officers in full uniform representing the different agencies involved in Shop With A Cop. One police officer told me that he’d just finished his regular shift at 7:00 AM and drove right to Walmart to be a part of the event.  Talk about dedicated. It was an impressive sight, and my staff and I were very honored to be a part of it representing Rondeau Provincial Park, Ontario Parks and the Ministry of Natural Resources & Forestry.

As the guests of honour started arriving, each officer was paired with a child. After a quick stop for a hot chocolate at the McDonald’s inside Walmart, it was time to head for the toy section! Some of the kids had already prepared their shopping lists in advance while others knew exactly what they wanted for themselves and their families, and couldn’t recite the words fast enough. Patrons who came in early to finish up their holiday shopping weren’t expecting to see a store full of police officers pushing around loaded carts full of toys and Christmas gifts. It was quite a sight! The aisles in the toy and electronic sections quickly became congested with officers and kids, but somehow we managed to pick out exactly what the kids wanted for themselves and their families, then headed for the checkout lines. Once the kids had finished their shopping, they put their gifts into the “Santa truck” parked out front and accompanied their officers out to the parking lot where they were allowed to sit in the police cruisers and enforcement vehicles and try out the lights and sirens.

There were also wagon rides around the Walmart parking lot that were donated by a local equestrian hobbyist and the MNRF Conservation Officers brought their Outreach and Education Trailer to the event so that the kids could learn about some of the things a CO does in the course of his/her duties. At Country View Golf Course, officers helped wrap presents, and then the kids were treated to a full breakfast. Little did they know that the Shop With A Cop committee had also arranged for a Christmas movie, cookie decorating, a magic show, and balloon animals and face painting by Dotsy the Clown. Members of the Chatham-Kent Police Services C.I.R.T. (Critical Incident Response Team) provided a quick demonstration on the specialized equipment they use in the course of their duties. It was pretty cool to see some of the kids dressed in tactical SWAT gear — they were loving every minute of it!

Santa Claus arrived just before eleven (also with a police escort), and the officers and their kids were called up in small groups to have their pictures taken with Santa. During the photo session, some of the kids wore the police hats of their officers which actually looked pretty cool with their painted faces. Between the laughs and the cheers from the officers and kids, it was hard to tell who was having the most fun. As I watched the officers high-five their kids and wish them a very Merry Christmas, it was pretty obvious that nobody wanted this day to end. The kids headed out with their gifts, as well as goodie bags that included Ontario Parks activity books, stickers, water bottles, Junior Naturalist patches and Learn to Fish swag.

Afterward, I gathered with my Park Wardens and we all talked about what a great event this was. Without hesitation, they all asked to be included in Shop With A Cop 2016. Some of us had cookie icing on the front of our uniforms (and on our faces!), but that just made the day even more special. To say that this year’s event was a success is an understatement.  It was clear to me that this event had a tremendous impact on everyone who was involved from the fifty kids who were in attendance to their families, the officers, the volunteers, the community and the organizations supporting the event.

From a personal standpoint, it had an impact on me too. There are lots of days when things just don’t go as planned.

Then you have a day like Shop With A Cop and we remember that to those few kids, we’re like superheroes and Santa Claus all wrapped up in one uniform and it makes the bad days worthwhile. Seeing all the officers and volunteers together in one room crowded around tables and wrapping presents with smiling and laughing children made the last few months helping plan the event totally worth it. Taking part in this event certainly allowed me to start my Christmas holidays on a brighter note knowing that, for at least one morning, I was the coolest person in a kid’s life. I can’t wait to do it again!!