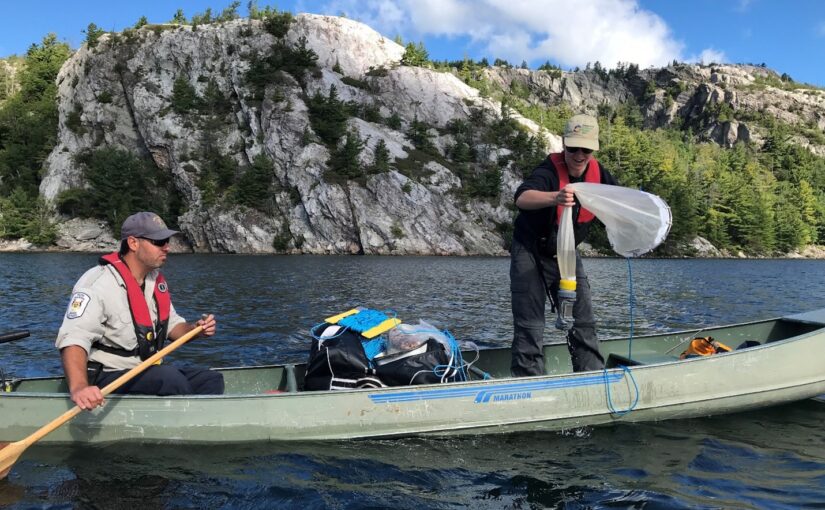 Did you buy something from our online holiday store last year? In today’s post, Ontario Parks staff talk about some of the vital protection work your purchase helped fund!

Ontario Parks — as part of a bigger provincial effort — has been working hard to assess and repair ecological integrity in many of our inland lake habitats, protecting different species throughout Killarney and other provincial parks.

Why do the lakes need our help?

During much of the 20th century, many lakes in the Killarney, Sudbury, and Temagami area were acidified. This change was caused by acid and metal deposits from nickel-copper smelting and the sulfur dioxide, nitrogen oxides, and carbon dioxide released by vehicles and power stations burning of fossil fuels.

Acidification made these lakes toxic to fish and other organisms. Many of Killarney’s lakes were considered “dead” — they were so acidic that fish could no longer live in them!

Lake acidification impacted more than just fish though; it meant the disruption of each lake’s whole ecosystem. Animals like Common Loons that depend on fish to eat were no longer able to breed successfully. Many loon pairs still tried to nest on Killarney’s lakes, but their chicks would die before reaching adulthood because of inadequate food supply.

Even today, there are still lakes in Killarney that are too acidic to support fish life.

But there’s hope for Killarney’s ecosystems!

Following progressively tighter air pollution laws passed by Canada and the United States over the last 50 years, humans have dramatically reduced the prevalence of acid rain.

Many of Killarney’s lakes have been slowly recovering over the past 30 years. This recovery is a powerful example of what can be achieved when communities and governments work together to tackle a complex environmental challenge.

This year, with supplemental financial support from the 2021 pop-up holiday store and the Friends of Killarney Park, Ontario Parks was able to hire two resource stewards. Jaden Nesbitt and Jon Menezes worked in partnership with Laurentian University researcher and master’s student Haley Moskal.

Their job was to visit 20 of Killarney’s lakes and replicate studies conducted in the 1990s to reassess how well Killarney’s aquatic ecosystems are recovering.

When visiting lakes, the team studied the ecosystem’s health from several angles. First, they tested the lake water, including its acidity, oxygen levels, and clarity. The researchers surveyed and documented which species were present at the lake.

These included species like mayflies, crayfish, minnows, and larger fish. Their work also identified organisms that have returned to the lakes without human intervention.

The team’s research and monitoring revealed some interesting findings

The pH (a measure of acidity) of nearly all of the lakes surveyed has risen above the threshold for reproduction of our most acid-sensitive fish species (Lake Trout). In some lakes, native fish like Pumpkinseed and Central Mudminnow re-established themselves without help from people.

By partnering with the university, we were able to survey more lakes, process more samples, and complete more species identifications than either group could have achieved on their own. The work isn’t done yet

Haley Moskal has now reached the analysis and writing stage of her MSc thesis, based on collections from her last two seasons of work in the park. When her thesis defense has been completed, we will be able to share even more results with you.

However, Ontario Parks has early access to her very encouraging results! Even so, these aquatic ecosystems will need a little help from us to get them back to their natural state.

Fish can’t fly or walk like other animal species, and they may not be able to migrate back through streams into the acidified lakes. Some species may need to be reintroduced by humans, so Ontario Parks is developing a five-year restoration stocking plan. The plan will be informed by historical records of the fish species originally found in the acidified lakes, as well as information collected by Haley and the resource stewards. Reintroductions may include hatchery-raised trout, or lake-to-lake transfers of native fish from within the park. We may even consider moving invertebrates such as crayfish or amphipods in the future.

There is a process to follow before those reintroductions can occur, however. The draft plan will be subject to an Environmental Assessment, to be reviewed by the Ministry of Natural Resources & Forestry, Indigenous communities, and released to the public for comment and potential revisions. Additional surveys may be needed to demonstrate that potential donor lakes are sufficiently free of invasive species or pathogens.

You can help the park with their monitoring efforts during your next visit!

The ecology, biology, and Discovery staff at Ontario Parks all use records that are submitted to iNaturalist to track the health of our ecosystems and the species that call the park home. By submitting your own observations to iNaturalist, you’re helping us learn about the park, so we can better protect it. This project was made possible through proceeds from the Ontario Park’s 2021 holiday pop-up store and the Friends of Killarney.

We are so proud of our environmental integrity and habitat restoration work, and grateful to the Ontario Parks supporters whose purchases at our 2021 online store funded this work.

Help us do even more in 2023! Put the Ontario Parks online store at the top of your holiday shopping list.