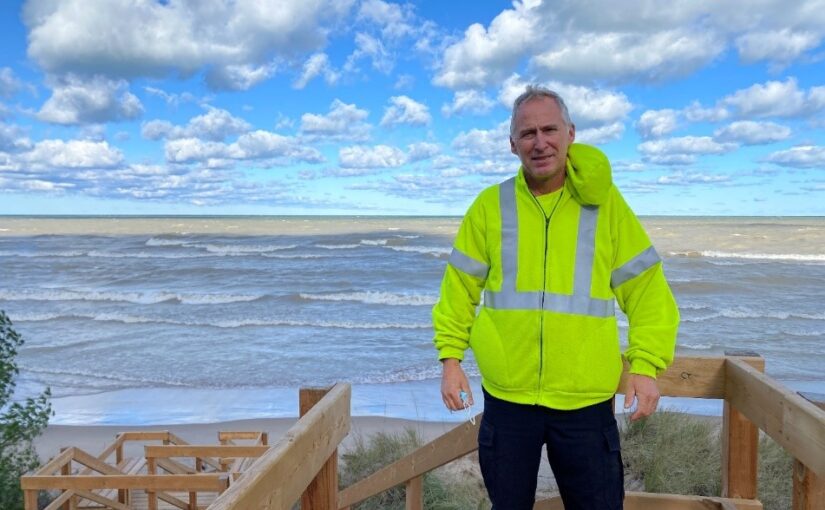 Have you ever been to Pinery Provincial Park?

Take a moment to think of your favourite spot. Is it the viewing platform along Riverside Trail? What about the boardwalk leading to the beach? Have you been to the top of the Nipissing Trail lookout?

Often we admire the beauty of the park’s natural wonders from boardwalks and lookouts, but have you ever wondered who built them?

Today’s blog is all about the man behind the boardwalks: Raymond Sheppard.

Ray started his career with Ontario Parks at Pinery Provincial Park in 1981.

That means he was worked over 30 busy seasons here at Pinery! When we first approached Ray and asked him if he would be willing to be featured in a blog about his time at Pinery, his immediate response was “Sure, but I don’t know what a blog is.”

After explaining the blog to Ray, we asked him to take us on a park tour and tell us about some of his time here at the park.

Here is what we learned:

More than a builder

It’s no secret that Ray loves to build things, and he’s very skilled at it. You’d be shocked to know that when Ray came to Pinery his talents were actually in plumbing!

Ray worked for a local consulting and construction business before coming to the park, where his primary job was to climb under houses and install plumbing. This made Ray an expert at installing and maintaining waterlines in campgrounds.

It was over his many years at Pinery that Ray refined his excellent carpentry skills, and became known for his talent at building docks, boardwalks, and staircases.

Early in Ray’s career, a problem was flagged with the road design in Pinery. After a supervisor created a redesign plan for the roadways, they hired Ray to implement it.

Ray, along with a few others, spent the winter building permit posts. Once spring came, they rerouted the roads and installed the new posts.

This was no small feat given there were 1200 campsites at the time! It was around 1985 that the campground roads were redirected to one-way routes, with the permit posts facing the direction of travel for easier visibility.

Ray has had many different roles over the years.

He worked on short contracts chainsawing and patching roads. He was a campground foreman, developing maintenance plans for the park. He even took on temporary assignments as an assistant superintendent! But of all the hats Ray has worn over the years, his favourite place to be was on the ground working in the campgrounds and building infrastructure. His second favourite was winter work, like plowing snow and maintaining ski trails.

In 2006 Ray took the position of senior park technician of maintenance, where he remains until today. This position allows Ray to ensure our park and campgrounds are constantly in tip top shape.

This is also where Ray has been able to lead, mentor, and train new staff. Ray leaves behind a legacy of being a skilled worker and a wonderful leader.

A battle with mother nature

For the last 40 years Ray has been in battle with Lake Huron, and often Lake Huron wins. Ray is unbothered by letting Lake Huron do what it wants, “It is just part of the job sometimes. Some years you rebuild staircases, other times you are digging them out of a sand dune,” he says.

Every spring Ray and a team of park staff head to the beaches to get staircases and boardwalks ready for summer visitors.

According to Ray, 2020 water levels were the highest he has ever experienced. This made 2020 the year of rebuilding stairs.

Ray says “You just have to work around Mother Nature. Sometimes trees fall on boardwalks, and stairs wash away.”

Early in Ray’s career he was building a boardwalk with his supervisor. When they received the lumber for the boardwalk, they noticed it was marked as 40-year lumber. The company advertised that the pressure-treated lumber would last 40 years.

At the time they joked to Ray that he would be the only one around to see if it lasted that long. Fast forward to rebuilding the Riverside Trail boardwalk a few years ago.

Sure enough, the lumber held up to 40 years, and Ray was around to see it.

Ray has experienced a lot of change in his time with Ontario Parks. Ray comes into work everyday and goes above and beyond. He takes pride in every project he completes, although you would never know it based on his humble attitude. Ray spends his time focusing on the success of his team.

As Ray reflected on his time at the park, there were countless names of coworkers, supervisors, and mentors he has worked with over the years.

These people have had such great impacts on him and the work they did together in the park.

Although today’s blog is about Ray, his focus has always been on his coworkers and his team.

Leaving behind a legacy

Ray has had a long and wonderful career at Pinery.

He has sparked connections with so many, and was the recipient of the 2019 Ontario Parks Legacy Award. The people who have known and worked with Ray over the years have memories that will last a lifetime. Even if you have never met Ray personally, you are likely connected to him too.

If you have ever admired a lookout point, used a water tap, driven through a campground, or read a sign in the park, you have experienced Ray’s legacy.

He leaves behind infrastructure that helps you connect with the natural world in a way so sustainable that you don’t even notice you are doing it.

We are thankful for Ray’s many years of service, and congratulate him on his well-deserved retirement.