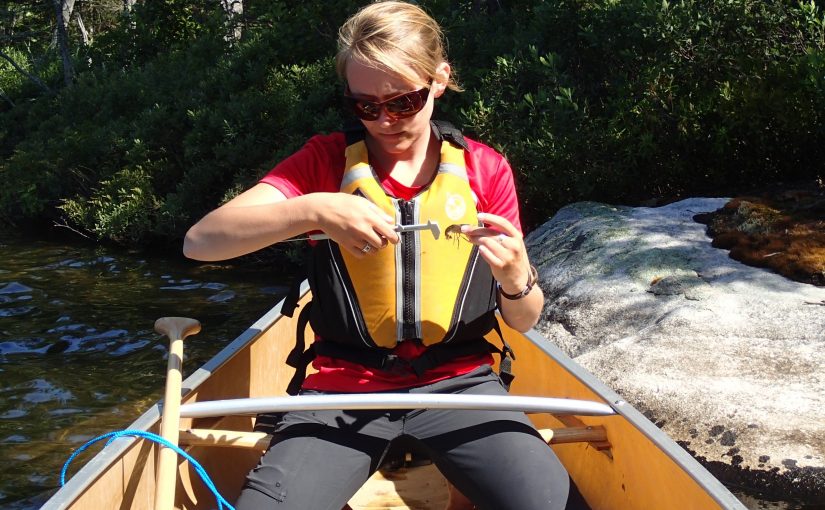 It’s been another busy year for science studies and monitoring in Quetico Provincial Park.

The following highlights just a few of the projects carried out this past summer:

The stories told by tree rings

Red Pine are one of the iconic species of Quetico Provincial Park. They often form picturesque stands of towering trees along rocky lake shores.

Red Pine are a long-lived species, surviving up to 300 years. In fact, Red Pine was an important source of resin used in the construction and repair of birch bark canoes (see photo).

In fact, the high amount of resin in Red Pine makes dead trees and stumps resistant to decay.

Red Pine also adapted to and are able to survive multiple low-intensity wildfires (smaller forest fires that burn through the understory).

Because Red Pine live so long and can survive low-intensity fires, they can tell us a lot about the history and behaviour of wildfires in the park.

In many locations, low-intensity fires are necessary for successful regeneration of certain species.

They also help prevent high intensity fires that could get out of control. For instance, low-intensity wildfires eliminate the build-up of dead material or dense layers of shrubs, such as Balsam Fir. If these layers are allowed to build up, the next fire will have more fuel and be more intense.

This summer, Quetico Provincial Park and Quetico Foundation staff worked with researchers from the University of Minnesota and the University of Wisconsin to study the scars on Red Pines. Researchers examined both living trees and the stumps of trees which died in the previous century.

Scars can be caused by fires, and repeated fires often leave a record in the growth pattern of trees. Other scars are formed during the collection of resin when a section of bark was stripped from the tree to cause resin to flow.

What did we learn?

Researchers discovered that stands located along major travel routes typically have higher frequency of low-intensity fires than areas off the main travel routes. This is especially true where there is evidence of peeled trees.

The results of this study will help inform the park’s new Fire Management Plan.

Quetico Provincial Park has only one native species of crayfish: Orconectes virilis or the Virile Crayfish.

However, since at least the early nineties, non-native crayfish have been infiltrating the park. Back then, Minnesota fisheries staff captured both Rusty Crayfish (Orconectes rusticus) and Northern Clearwater Crayfish (O. propinquus) in the shared border lakes of Basswood, Knife and Sucker.

When new species move into an ecosystem, it’s important to monitor their impact.

For the past three years, Quetico Provincial Park and Quetico Foundation staff have conducted surveys using modified minnow traps baited with cat food. These help to better understand the distribution and biological characteristics of these introduced species.

Surveys have also been conducted of native crayfish populations to better understand their biological characteristics and habitat preference.

What are the new crayfish up to?

Right now, the distribution of Rusty Crayfish is limited to the area around Prairie Portage of Basswood Lake, but Northern Clearwater Crayfish are moving both upstream and downstream from the original site.

So far we have found Northern Clearwater Crayfish in around 10 lakes (which is basically every lake we have looked at in the south end of the park).

It’s not entirely clear why Northern Clearwater Crayfish are on the move and Rusty Crayfish are not, since the Rusty are typically reported as the more aggressive invasive species.

What did we learn?

It looks like the Northern Clearwater Crayfish are crowding out our native crayfish.

The ecological impacts of Northern Clearwater Crayfish replacing native crayfish aren’t entirely clear, as most studies have focused on the impacts of Rusty Crayfish invasions.

It’s important to monitor whether the Northern Clearwaters are simply replacing the native Virile Crayfish, or whether they’re also having a broader impact on the ecosystem.

Broadscale Monitoring is the standard method used in Ontario for assessing the status of fish populations, as well as monitoring water quality, angling effort, and zooplankton including invasive species.

This past summer, the second cycle of Aquatic Broadscale Monitoring (BsM) was completed in Quetico.

For the past two years, Quetico staff have worked with the MNRF Aquatic Research and Monitoring Section section to investigate ways to expand the BsM assessment to the broader aquatic ecosystem while minimizing sampling mortality.

Hydroacoustic equipment (think: very high-tech fish-finders) was used to survey several lakes to provide counts of the number of “particles” in the water. In this case, particles range from small phytoplankton to the largest fish.

The results from the hydroacoustic surveys work with results from the netting and zooplankton samples to determine how effectively the BsM program can sample the range of organisms in a lake.

This data can be used to assess ecosystem health in what is referred to as size spectrum analysis – a comparison of the abundance of different-sized organisms in a waterbody.

It has been found that healthy ecosystems have a different size spectrum signature than ecosystems which are affected by over harvest or habitat issues.

Why do we survey our lakes?

Broadscale Monitoring gives us the data we need to manage our fisheries and aquatic ecosystems sustainably. Because of the relatively pristine state and variety of lakes in Quetico Provincial Park, it is one of the best places in the province to conduct this research.

Since Quetico’s aquatic ecosystems and fish populations are under less stress than other lakes/regions, they provide insight into the impact of province-wide stressors, like climate change.

A big thank you!

Much of this work is accomplished thanks to the assistance from the Quetico Foundation, who provide a Research Team of four people and a Biologist Intern.

Others assisting in the research and monitoring include resource technicians from the Lac La Croix First Nation and MNRF staff, such as the Broadscale Monitoring crews.

The data we collect gives us the knowledge to protect Quetico’s rich biodiversity and sustainably manage our natural resources around the province!