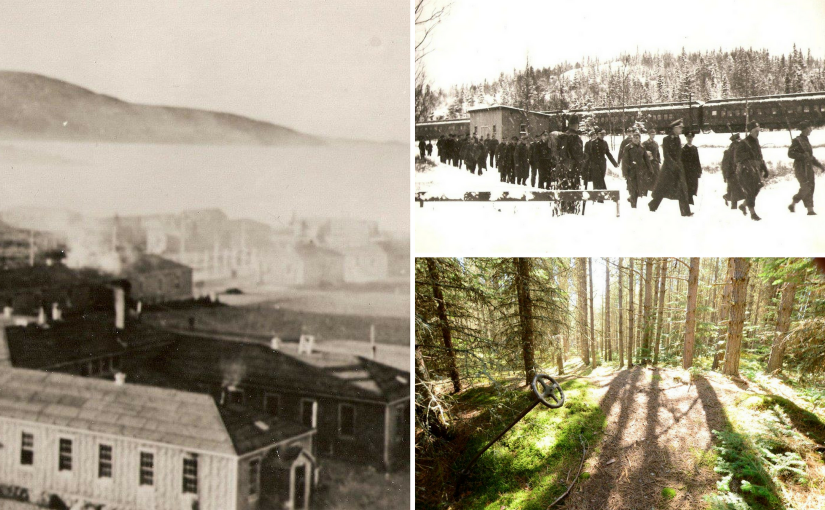 During World War II, the area now known as Neys Provincial Park was referred to as Neys Camp 100.

Instead of campers, it mainly held high-ranking German prisoners of war (POW). The camp operated from 1941 to 1946.

Why Canada and why Neys?

Britain was running out of space to house their prisoners of war, and there was a concern that if prisoners escaped they could compromise British defenses.

Britain turned to Canada for help, and funded the construction of 26 major prisoner of war camps across the country. There were three POW camps located along the north shore of Lake Superior; one at Angler, close to present day Marathon, one at Red Rock, and one at Neys.

Located along the north shore of Lake Superior, Neys is a remote location. In the 1940s, it was even more remote as the highway was not yet complete.

Neys was selected as a POW camp primarily because it was close to the rail line. The Canadian Pacific Railway provided direct access to the site, and prisoners and supplies could be easily transported and unloaded at the Neys rail siding.

Lake Superior, the largest Great Lake by surface area, and the boreal forest also provided natural boundaries for the camp. This made escape attempts a challenge. Imagine the campground of Neys Provincial Park completely cleared of trees. Picture 27 buildings of various sizes, and a rectangular compound including barracks surrounded by three rows of barbed wire, 10 feet high, with a guard tower in each corner.

Try to imagine arriving at Neys during the wintertime, just like the first trainload of prisoners did in January of 1941. Consider travelling without knowing your whereabouts, as the railroad signs along the way had been covered up.

Neys Camp 100 had the capacity to hold 500 prisoners and 100 guards. The number of prisoners fluctuated over the course of the war.

Within the prisoners’ compound there were four barracks, a senior prisoners’ barrack, a hospital, a mess hall, a recreation hall, and a detention cell.

Many prisoners reported that they were treated and ate well while being interned at Neys Camp 100. There are accounts that the prisoners were served fresh eggs upon arrival to the camp, received sugar rations, and ate food such as soups, stews, potatoes, bread, and pickled meats.

Prisoners passed the time playing sports, games and musical instruments, and creating artwork. The prisoners of war also worked for the Pigeon River Timber Company through the Prisoner Employment Program.

Wait, is that a Black Bear?

Yes, the prisoners at Neys Camp 100 had a pet black bear.

Her name was Nellie. Stories tell of her following German commands, walking on a leash, and being their mascot for sporting events. How she became domesticated is unknown.

(Today, we work to keep Ontario’s wildlife wild, and all bears at modern-day Neys wander free.)

What happened to the camp after it closed?

The prisoners at Neys Camp 100 were sent back to Germany in March of 1946, however many immigrated back to Canada.

All of the buildings were dismantled in 1953, and the materials were reused in nearby towns such as Marathon, Ontario.

Are there any remnants of the camp?

Today, there are remnants of buildings and camp features throughout the campground that remind us of the history of Neys Camp 100.

This photo shows the largest remnants of the camp, which is the Mess Hall.

The Mess Hall was an H-shaped building where the prisoners ate. There were two large dining halls and a kitchen in the middle section.

From POWs to park visitors

The land Neys Camp 100 occupied was reforested in the late 1950s and early ’60s, and became a picnicking and camping area for locals.

Neys was officially designated as a provincial park in 1965 and opened its doors to campers – no barbed wire involved!