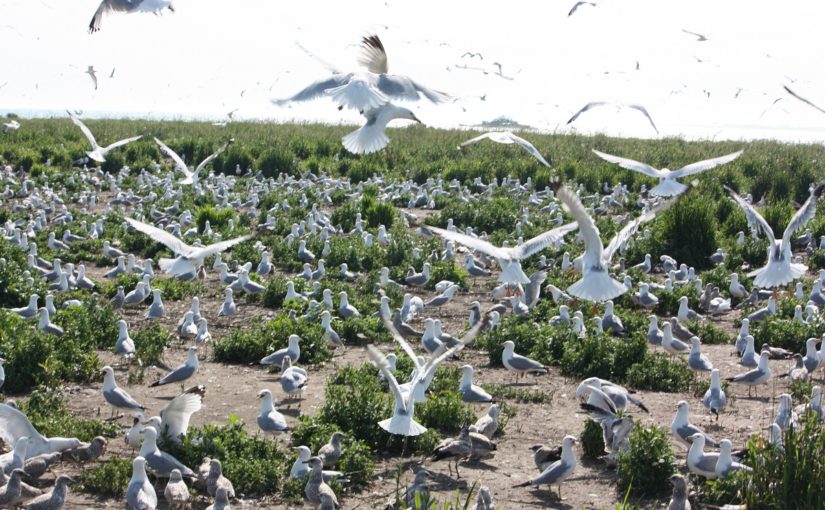 While Presqu’ile is not the busiest park in Ontario, it can get quite hectic at times in the summer. However, I am pretty sure most people could not guess where the busiest place in the park is.

It is not the Friday line-up to register your campsite, or the beach on a sunny Sunday in July. It is not even the line-up for ice cream at the park store on a hot summer day.

It is a place most campers never go…

With squabbling neighbors and squawking youngsters, Gull Island is so crowded you can’t move out of your designated two-foot square space without running the risk of being shouted at and pecked.

Well, of course! It’s not a people place, but rather a bird place. Gull Island (along with neighbouring High Bluff Island) is the site of the most diverse water bird colony on the Great Lakes, with seven species of colonial water birds setting up shop every spring.

During breeding season with young in the nest, there may be a quarter million birds out there. While both Gull Island and High Bluff Island are crowded, Gull Island is certainly the busiest. Having no trees, all the birds on Gull nest on the ground, and nesting space is hotly contested. It pays to get there early and stake out a spot.

Of the five species that nest on Gull Island, the namesake gulls that get there first. Ring-billed Gulls and Herring Gulls start picking out sites in February, with nesting starting a month later.

Double-crested Cormorant arrive in early April and Caspian Tern shortly after.  Common Terns, the smallest birds by far, don’t get there until late April. By then, it is pretty crowded, and these small and declining birds have a pretty tough time. So tough, in fact, that in some years before 2014 they didn’t manage to raise any young at all!

Nine years of research on Common Terns here by scientists from Penn State University have shown us how to help this species.

Starting in 2014, an area of Gull Island has a raised grid of string put up that has open squares too small for other birds to go through but Common Terns can land in. This gives them space to nest and the chicks protection from predators.

Running the gauntlet of angry bills

The other species are on their own though, and manage to shove and squirm their way into a nesting spot to raise their young with varying degrees of individual success. All spring and summer long, they must protect their space and nesting material from neighbours, and run the gauntlet of angry bills to bring food to their young.

Gull Island is easily heard from everywhere in the park on calm days. Imagine what it’s like to be there!

What attracts birds to Gull Island?

Why do birds do this? Why put up with the hassle? Nesting in groups does have its advantages. All those bills do provide protection from predators. Hawks and owls don’t usually manage to penetrate a colony. Nesting on an island is important too as it provides isolation from ground predators such as foxes, raccoons and coyotes. There are not many places like that and that is why space on islands like Gull is so hotly contested.

It is actually a bit too close to the mainland and in some years, a predator does get over there. Foxes and coyotes have caused great disturbance on occasion, with some predation and nest abandonment, but the density of birds on Gull Island can usually fight them off.

Colonies on High Bluff Island have not been so robust in years past, and a family of foxes caused the entire ground colony of cormorants to leave High Bluff in 2013 and 2014. They went to Gull Island, of course, making it even more crowded!

These colonies, for all their bluster, are very sensitive to disturbance

That is why these islands are off-limits to people from March 10 to September 10. But people can visit them the rest of the year and many people do go to Gull Island. A visit in September is an interesting and educational adventure

It is usually possible to merely walk over, if you don’t mind a bit of a wade. The water’s rarely deeper than half a metre and not too difficult.

Most people go over to look for migrating birds, but a visit to the empty September bird colonies can provide a glimpse into what a waterbird colony is really like. You can see the difference between the cormorants that construct raised stick nests, and the gulls that only use divots in the gravel. The Common Tern grid can also be inspected.

On the grimmer side…

…it also becomes apparent that many birds don’t make it through the summer. The desiccated corpses of both young and adults that lost the battle for life are scattered about. Nature can seem cruel but competition ensures the strongest survive to carry on the species.

And competition doesn’t get much more intense than in our crowded, busy, but crucially important water bird colony.

Why not take that plunge in September and visit in person?