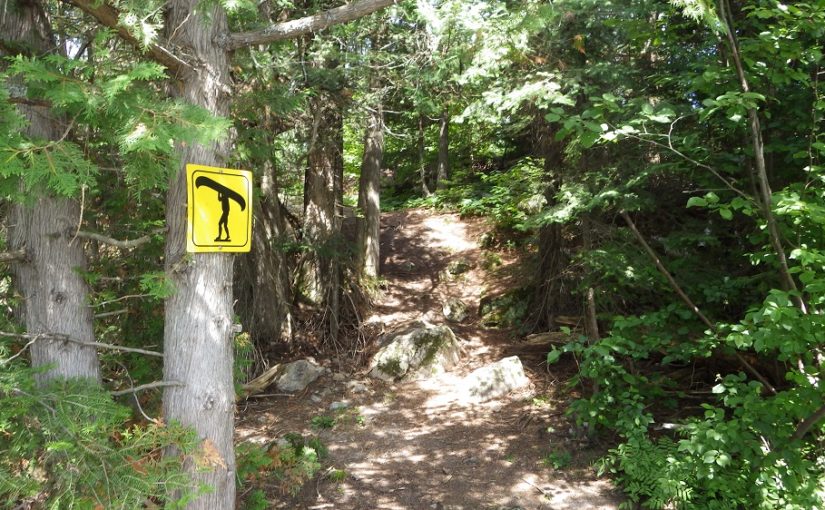 With the warm weather, our minds wander from day-to-day drudgery like the terrible commute, the clicking of keyboards, the abstract shapes, and disjointed words of a presentation.

Suddenly, you’re dreaming about pine trees, a campfire, and great people you don’t get to spend enough time with.

Glazed-over eyes slowly make their way to the window, and you begin to plan your escape.

Good thing accessing some of Ontario’s most beautiful and iconic landscapes isn’t too hard these days. Ontario Parks has thousands of campsites, many of them less than half a days’ travel from major urban centres.

Many people have taken their first camping trips here, and keep coming back year after year. Maybe you’re not alone here.

Some of these backcountry routes have become rather popular, due to recent books like Don’t worry about fitting in, you fit in a canoe, by Brent Travers, a fine book about solo tripping, and Most things of the things I need to know about life, I learned on a thunderbox, by Sandy Shores (yes that is her real name!). Finally, to appeal to a generation who prefers wireless over wilderness: Last man bun in the woods by Randy Tozland.

The rise of these popular adventure books — written in an abrasive, yet inviting style — has encouraged people who didn’t know a butt from shaft to pick up a paddle. So, you’re making your way to the access point, you have your permit and getting your canoe into the water.

The arithmetic of portage competition

On the right weekend, there might be dozens of other adventurers heading off in all directions, but mostly in the same direction as you. There’s this subconscious math that happens with all trippers:

It’s not pretty, but math is amoral and numbers don’t lie. This is the struggle of the backcountry camper who wants to make it to their preferred site first.

The lake, on its expansive plane, sees little crowding. However, the bottleneck occurs when you leave the water at that simultaneously glorious and torturous yellow sign — the portage!

It’s time to draw a line in the sand All this congestion meant that some people were held up on their trip for up to 14 minutes, waiting for their turns to march their way up the muddy portage into the next lake.

People are used to waiting in lines for coffee, in traffic to get to work, but they will not wait in line to portage.

We have observed some impatient people continue carrying their canoe through a narrow portage, by lifting the canoe high above their head, while the slower camper ducked very low. It was a reasonable compromise, we suppose.

Alas, other times, we have seen what we have described as “portage rage.”

In the late May heat, surrounded by black flies, several groups of canoeists converged at one of Ontario Parks’ rare three-way intersection portages (location withheld to protect those involved).

Three canoe bows simultaneously bumped into each other, causing the paddles carefully placed over the seats to fly forward and trip everyone involved. A ramming match ensued at the intersection, when the remainder of their parties caught up to all the commotion.

A brawl occurred. Paddles were broken, a sleeping bag soiled, four Nalgenes were crushed, and the portage had to be closed because it became a bear attractant due to all the food spilled out of barrels — GORP everywhere!

There was more than just bruised Kevlar on the portage that day. It was truly tragic. To combat these incidences, Ontario Parks will be piloting a new method of promoting safe passage on portages.

After testing the “take a number” system, similar to a deli, which did not work (the order of the numbers at the opposite ends of the portage were complicated, and we had people using their number from portage 1 on other portages to their advantage, in addition to the litter), we decided to go with a special traffic light system.

The solar-powered lights are placed approximately 15 m from shore at each end of the portage. Instead of being on a post, they are at knee height, so campers may see them while portaging.

The LED lights are similar to a road traffic light: red means stop and wait, green means go, but the amber light is more nuanced, indicating the camper should take a rest in the designated rest area partway through the portage, and allow the other camper to pass.

For those heading to the backcountry this spring, there will be a nine-minute instructional video at the access point to watch prior to picking up your permit.

As of April 1, these lights are installed on all Ontario Parks backcountry portages within one day’s travel of major access points. It is hoped that this system will prevent unnecessary congestion on portages and eliminate “portage rage.”