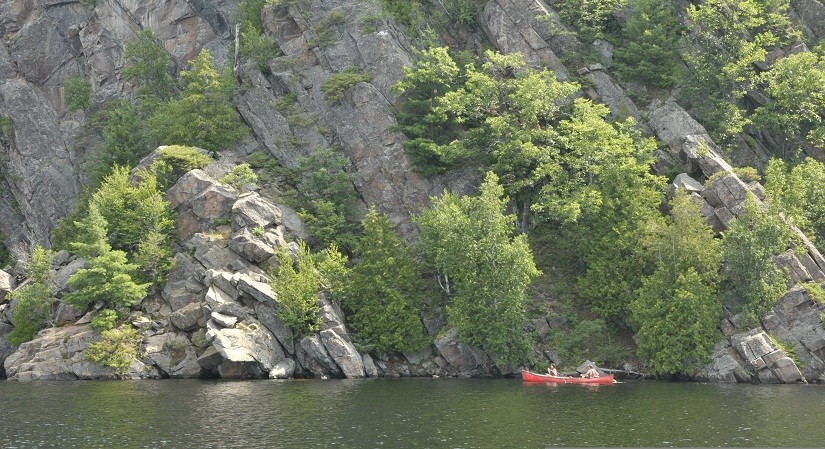 Bon Echo Provincial Park is usually known for the impressive cliff face towering 300 feet above Mazinaw Lake. Mazinaw Rock has inspired and amazed many visitors for thousands of years – but it’s more than a nice view. Though a harsh climate, the Rock is home to many different species of plants and wildlife: lichen, wild columbine, ancient cedars, five lined skinks and barn swallows, to name a few.

In the 1990s, a brood of peregrine falcons was released at Bon Echo as part of a Species-at-Risk recovery effort. We’ve had a nesting pair on Mazinaw Rock almost every year since.

These birds of prey have remarkable eyesight, razor sharp talons and beaks of immense strength. They can fly over 320 kilometres per hour when dive-bombing their prey. Though the peregrine falcon population has been recovering, this species is still recognized as a Special Concern species in Ontario and a Threatened species in Canada.

This summer, an incident that could have been a terrible falcon fatality became a success story – thanks to the help of dedicated cottagers, park staff and a falcon rehabilitator.

On June 13th, a group of cottagers were out kayaking when they saw a bird fall off Mazinaw Rock and plunge into the water. As they hurried to the fallen bird, the cottagers identified it as a peregrine falcon. The falcon was carefully brought to park staff after being rescued from a crevice at the base of the Rock.

Park staff then transported the falcon as quickly as possible to Dave Ascott, owner of Falconry Concepts, a raptor rehabilitation centre located in Madoc, Ontario. Upon closer examination, Dave determined that this falcon was a female hatchling, only about five weeks old.

Though park staff had suspected a broken neck and other possible injuries from the impact of the fall, the falcon was only suffering from hypothermia, and had no broken bones.

Back at his rehabilitation center, Dave nursed the falcon chick back to a healthy state, stating that if another hour or two had passed, she may not have survived. Over the next three weeks, the falcon was fed and cared for, and begin learning how to fly as her downy feathers were replaced by her flight feathers.

On July 5th, Dave and assisting park staff hiked to the top of Mazinaw Rock to release the peregrine falcon as close to her parents’ scrape as possible. Once above the scrape, Dave and the park staff could hear the falcon parents and their two other chicks chirping, calling and screeching quite loudly – the scrape being about three-quarters of the way up the cliff face.

Dave skillfully conducted the release of the rescued peregrine falcon, who flew swiftly into the sky, back where she belonged. Dave estimated that there was about an 80% likelihood that the rescued chick’s parents would take her back, and their close proximity to her (without aggression) suggested the same.

As Dave and the park staff boated back across the lake and looked up to the top of Mazinaw Rock, the young peregrine falcon could be seen perched directly above the scrape of her family, while her parents flew nearby.

Though an unfortunate experience for the young peregrine falcon, the rescue and release efforts provided an amazing learning opportunity for park staff. Incorporating details of the falcon rescue into the park’s summer educational programs allowed children and adults to make a personal connection to this success story, sparking interest in both peregrine falcons and other Species at Risk.

This once-in-a-lifetime opportunity reminded all of us from the Natural Heritage Education team at Bon Echo that we are making a difference, whether by educating park visitors or — on rare occasions — by helping save the life of a peregrine falcon.