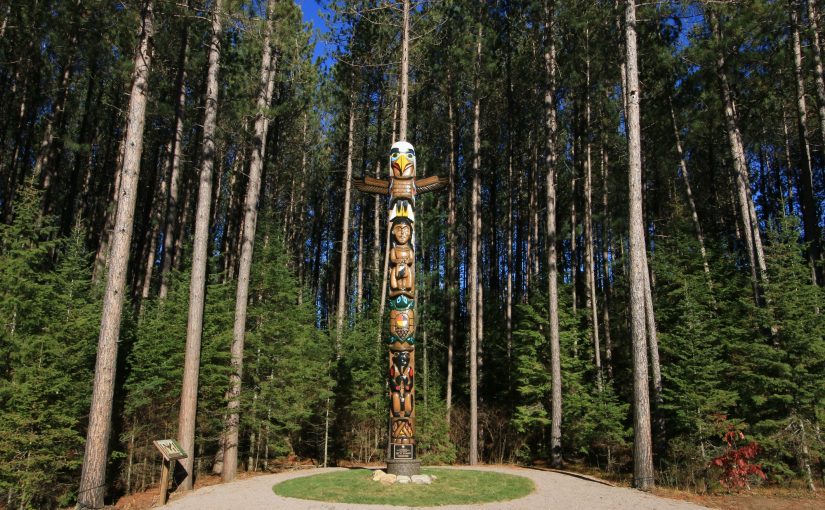 In October 2015, the Algonquins of Ontario raised a totem pole overlooking Algonquin Provincial Park’s East Gate. An Algonquin elder carved it from an eastern white pine almost as old as the park.

Their gift comes with a story.

It all started in August 2013, when a tornado swept through Dan Bowers’ lakefront property. His family was safe, but a century-old pine by the water’s edge wasn’t so lucky.

“That giant grandfather pine had fallen to the water,” said Dan. It troubled him each time he passed by. “I couldn’t just leave him laying there.”

He brought the pine home to his studio. That winter, he started carving. At that time, the Truth and Reconciliation Commission was taking statements from survivors of the residential schools. Stories in the news told of children taken from their families, robbed of their culture and language, beaten and abused.

It was no news to Dan. Elders of all nations had shared their stories with him as he kept fire. He’d heard his father’s story, too.

“My dad was taken away and put in an orphanage when he was only a young boy. He didn’t even know his family for 25 years.”

Then Dan heard a speech by federal Senator Murray Sinclair.

“I thought it would be a good time to celebrate that truth and reconciliation with all nations across Canada.”

Dan didn’t want to disrespect the culture of traditional carvers like the Haida and the Cowichan. So he carved the stories from his own people. The eagle. Turtle Island. The sacred fire of healing and renewal.

“I carved at night, with the Grandmothers shining down. It just seemed to flow. With each stroke of the knife, the stories would just come back to me.”

When the totem was finished, the Algonquins of Ontario offered it to Algonquin Provincial Park in the spirit of peace and reconciliation. Park Superintendent David Coulas was deeply touched by the gift and the spirit in which it was given.

The grandfather pine was raised in a place of pride at the eastern gateway of the park. At its foot, interpretive panels share the totem’s significance. In the spirit of reconciliation, the park hosted a community feast afterwards. Parks Group Leader Tania Jermol planned the event with great care. The menu included traditional Algonquin foods, including a special strawberry drink, soup made from the Three Sisters – corn, squash and beans—and bannock baked according to an elder’s recipe. “It was so powerful to see our staff, many of them in uniform, and the Algonquins, the whole spectrum from the elders to the little kids who are the future, all sitting and sharing a meal together,” says David.

“Following the ceremony, several of the elders came up to me. They said it’s the first time in their lifetime—in their lifetime!—they feel welcome in Algonquin Provincial Park.”

“We need to resolve a lot of issues in the past,” says Dan. “But I don’t want to look back anymore. We need to move forward now.

“I think we’ve started a good path. Hopefully we can keep on that journey.”

Reconciliation won’t happen overnight, says David. But events like this build greater respect and balance between the park and the community. And that’s a good start. That Grandfather pine is sharing his stories.