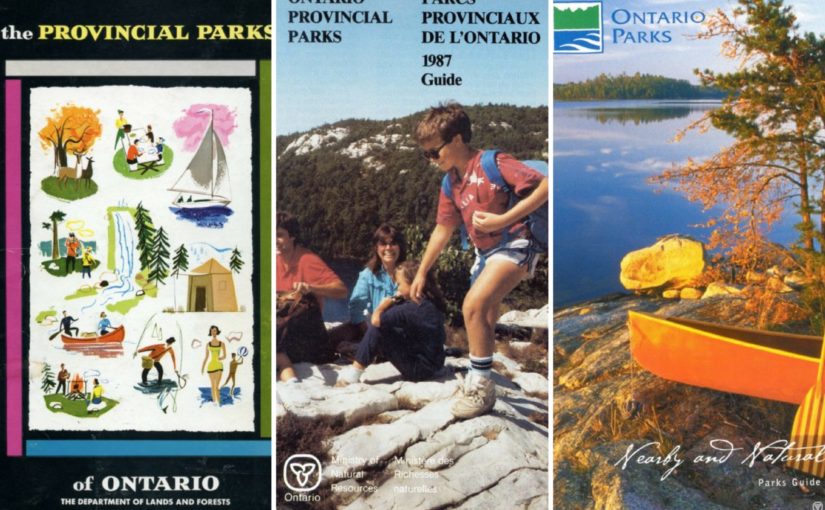 Gearing up to celebrate 125 years of parks had us digging through our archives in search of vintage photos and documents. Over the course of the year, we’ll be sharing our discoveries in an OP125 blog series.

This month, we’re taking a look back at how our annual parks guides have evolved over the decades…

Parks guides through the years

The parks guide is an essential part of any trip to Ontario Parks and has been printed in different formats over the years, from fold-out maps to booklets.

This parks guide comes from 1957. We only had 26 provincial parks back then! As you can see, the “Ontario Parks” brand did not exist. Also, the Ministry of Natural Resources and Forestry was known as the Department of Lands and Forests.

This parks guide came out a few years later. Ontario Parks had grown to 58 provincial parks by then. You can see the popularity of car and RV camping reflected in the design!

This majestic owl covers the parks guide from 1982. By then, Ontario Parks’ governing body was known as the Ministry of Natural Resources.

The iconic La Cloche Mountains of Killarney Provincial Park star on the cover of the parks guide from 1987. In the background, you can see beautiful white quartzite ridges peeking through the trees.

1993 was a special year for Ontario Parks, as we celebrated our 100th Anniversary. We celebrated with a special centennial logo, as you can see on the cover of the parks guide. In 1993 we had 256 provincial parks, encompassing an area of 6.3 million hectares.

This parks guide looks a bit more familiar to what we see today! The Ontario Parks logo finally appears, and we see representation of the iconic red canoe.

This year’s parks guide is a special edition that folds out into a map of parks to help plan your camping adventures! The map also features a timeline of Ontario Parks’ major achievements over the past 125 years.

To learn more about the history of Ontario Parks, visit our interactive timeline.