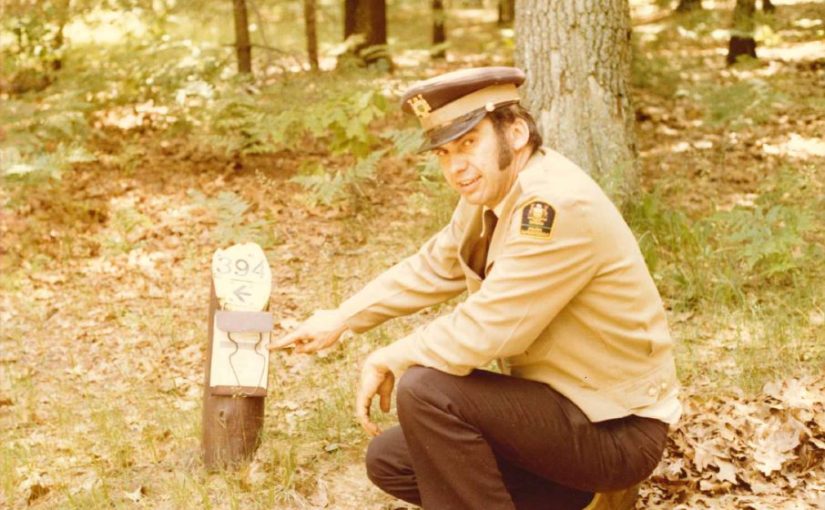 Gearing up to celebrate our 125th anniversary had us digging through archives in search of vintage photos and documents. Over the course of the year, we’ll be sharing our discoveries in our OP125 blog series.

This month, we’re looking back at the evolution of our park uniforms.

When Algonquin Provincial Park (Ontario’s first provincial park) was created in 1893, park rangers did not have uniforms. They wore a ranger badge with their bush clothes.

During the late 1920s, there were formal blue uniforms for Algonquin rangers to wear for meeting the train, however they were hardly worn as they were not practical for working in the woods.

Starting in 1947, a crest with the words “Lands & Forests Ontario” was created and worn on the sleeves of uniforms. The crests also had various departments and positions labelled on them (see uniform above).

The Department of Lands and Forests managed Ontario’s provincial parks until it reorganized and become the Ministry of Natural Resources in 1972.

This style of crest became the official crest for the provincial parks program within the new Ministry of Natural Resources in 1973.

Larger crests were developed in 1982 for use on jackets and they remained the same until 1988.

Starting in 1988, the crests on the park uniforms became bilingual. More text was included on the crests than previous versions.

Around the same time, the uniform crests changed slightly to include some text in green. This change was made in response to complaints of too much yellow on the previous crest.

In 1996, Ontario’s provincial park system adopted a new entrepreneurial operating model and officially became Ontario Parks. This was symbolized by a new brand and logo which remains to this day. The new image also meant new uniforms!

In 1997, the uniform shifted from beige and brown to beige and navy blue. New crests were created and a polo shirt featuring the Ontario Parks logo on the chest was also introduced.

Park uniforms have changed and evolved over time, however Ontario Parks staff have always worn our hearts on our sleeves.

It is thanks to the dedication and hard work of park staff that Ontario Parks is known as one of the best park systems in the world.

To commemorate Ontario Parks’ 125th Anniversary, park staff will be wearing a commemorative pin on their uniforms throughout 2018. The design of the pin is inspired by the original Department of Lands and Forests logo. Do you have any vintage camping photos from your time spent in Ontario Parks? Share your photos with us using #OP125 @OntarioParks.