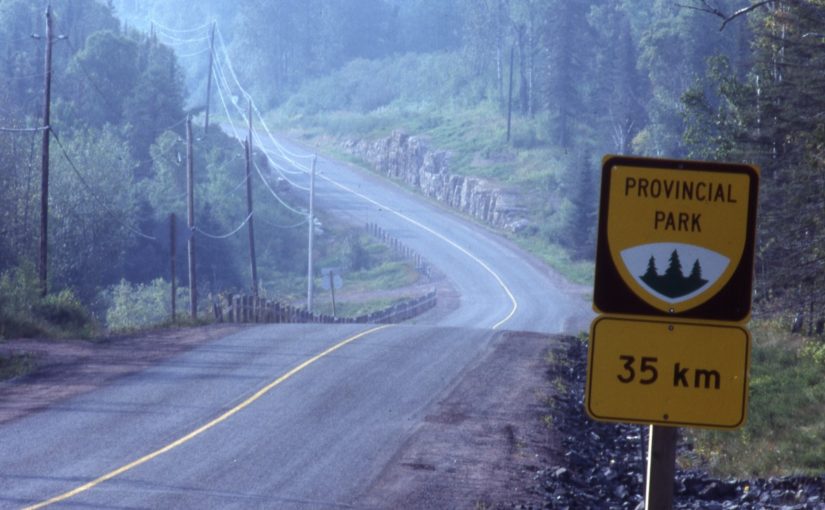 Today, we’re taking a look at some Ontario Parks entrance signs and how they have evolved through the ages!

Each park is unique and so are many park entrance signs. With too many to choose from, this blog highlights one sign from each zone of the Ontario Parks system.

From field to forest

Emily Provincial Park is located close to Peterborough, in the heart of the Kawarthas.

It’s tough to see, but in the historic photo below, the sign reads, “Department of Lands and Forests” under “Emily Provincial Park.” The Department of Lands & Forests oversaw provincial parks until they re-organized in 1972 to become the Ministry of Natural Resources.

Before Emily became a provincial park in 1957, the land was farm fields. As you can see in the historic image, there are very few trees.

With some assistance from park staff in the beginning, trees and shrubs were planted along the boundary of the park to re-naturalize the land. You can see in the modern image of the park entrance that the park has transformed from field to forest.

A reminder of days gone by

Located in northwestern Ontario, on the north shore of Lake Superior, Neys Provincial Park is rich in cultural history. Signs at Neys are mounted on old boom logs used during the logging days to signify the history of logging in the area.

The above sign shows the old Ontario logo and says “Ministry of Natural Resources” — the Ontario Parks brand didn’t exist yet!

The more recent signage at the entrance of Neys Provincial Park emphasizes the current Ontario Parks logo, adopted in 1996.

In the late 80s, the depiction on the entrance sign of Samuel de Champlain was changed to that of an “unnamed voyageur.” A voyageur was chosen to commemorate the culture of travellers — tough, hard-working, boastful and jovial, despite 16-hour days paddling huge birch bark canoes and portaging tonnes of goods over herniating portages.

The Mattawa River was considered the most difficult and dangerous part of the cross-Canada canoe route where voyageurs played an instrumental role in the fur trade for 400 years.

Established in 1970, Chutes Provincial Park is the only provincial park between Sudbury and Sault Ste. Marie on the Trans-Canada Highway.

The original stonework of this entrance sign has endured the test of time.

Point Farms Provincial Park is located in southwestern Ontario on Lake Huron. The design of this sign is unique and resembles a barn.

This photo was the first version of an entrance sign for Point Farms, taken during the 1970s. The park’s original master plan indicated that park signage was to reflect the agricultural theme of the area.

To this day, the entrance sign incorporates barn board which compliments the Stirling barn built in 1889 (still in the park).

There were several farmsteads on the property that is now Point Farms Provincial Park. Fence rows, tree lines, and apple trees remain from these old homesteads.

Although park signs have changed and evolved overtime, the rationale behind the creation of provincial parks has remained constant with the desire to preserve Ontario’s natural and cultural heritage.