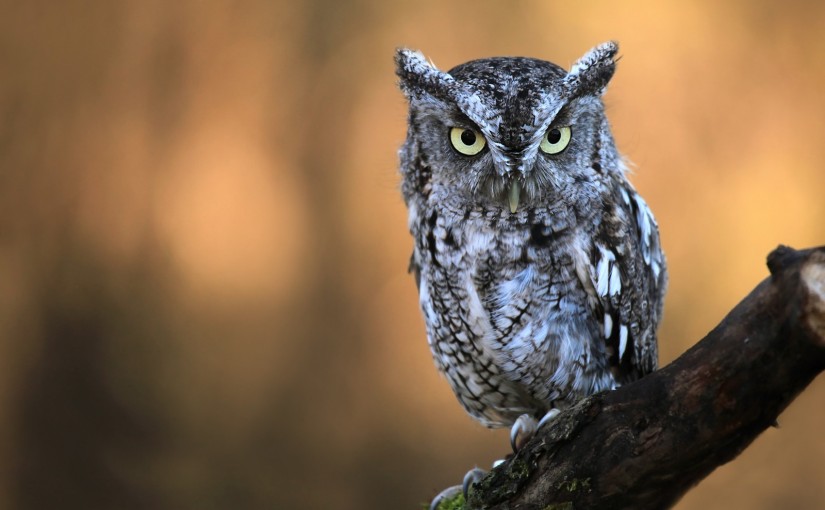 We desperately needed to confirm breeding evidence for Eastern Screech Owls in our survey squares for the Ontario Breeding Bird Atlas back in 2005.

It was our last chance given that the atlas was wrapping up the collection period and I was frustrated since I confidently knew that screech owls did indeed breed in the park, but sadly we just hadn’t managed to be in the right place at the right time to confirm it.

A casual chat with one of my colleagues one afternoon was about to change that.  Marilyn reported that there were several small owls in her backyard just outside the park. I asked a few questions to get more information and immediately got excited. I gathered my then-fiancée and a birding friend, and we headed down the following evening around dusk. Upon arriving at Marilyn’s house, however, we were saddened to learn that they seemed to have moved off. When we searched, we couldn’t find any sign of them. No remains of a nest, no owlets calling to their parents and nobody hunting for food.

We were ready to head home when Marilyn, seeing we were a little dejected, suggested we try the conservation area just down the road. Excited at the prospect, we immediately headed down and quietly parked, closing the car doors silently and nudging them closed with our hips.

We stood in silence for a few minutes listening and watching in the darkness. It was a black night with no moon. Then, off in the distance we heard a series of whinnies and short whistles, and we instantly grew excited.

We had brought with us flashlights with red filters over the lenses. (Red light doesn’t destroy your night vision as much as white light.) We rushed over to a small clump of trees in the middle of the clearing and stood to listen again with excitement.  More winnows and whistles echoed through across the field. I began to imitate a mature screech owl to see if I could confirm what we were hearing.

As soon as I began to imitate the owl…all the noises instantly stopped.

I grew a little ashamed. As a seasoned naturalist, I should know how to make a passable owl call. We stood in complete silence in the dark. Crickets.

Feeling sheepish, I decided to try to imitate the sound of a mouse by creating a squeaking sound. I licked my fingers and sucked air through the gap between my two fingers and made a very loud series of squeaks. More silence; more embarrassment.

In the darkness, I think all three of us were resigning ourselves to the fact that we just weren’t going to get hard evidence of breeding. But being stubborn, I decided to try one last squeak.

As soon as I made a sound, I felt a sharp blow to my right temple. Instantly, I felt dizzy and my knees began to give out.

An owl had hit me square in the head and inflicted a sharp blow!

In the confusion, I fired off my red-filtered flashlight and lights began to strobe around the clearing. My partners also fired their lights and out of instinct hit the ground.

Above us, an adult Eastern Screech Owl snapped its beak sharply at me, flying and swooping back and forth, buzzing over my head. We duck-and-covered and began a frenzied crawl back to our vehicle, the darkness intersected by flashes of red and screams of fear.

We beat a hasty retreat and left the owls in peace. We spent some time tending to my wounds – I had four deep puncture wounds in my temple from the owl’s talons.

We were left in awe of this impressive, 20-25 cm bird, weighing an impressive 5.9 ounces!

I suffered from a case of owl-induced whiplash for about a week afterwards, and spent a lot of time considering what would have become of me if we had met a larger owl!

A note of caution: Imitating animals in the wild can cause them stress. While it is thrilling to interact with wildlife, you can cause undue harm by imitating or playing breeding songs or calls. In this case, our intention was to confirm that the species was in fact breeding in that area of Ontario. We do not imitate owls routinely and would encourage you to listen and experience Ontario’s wild animals, but please do your part to help to keep them wild.