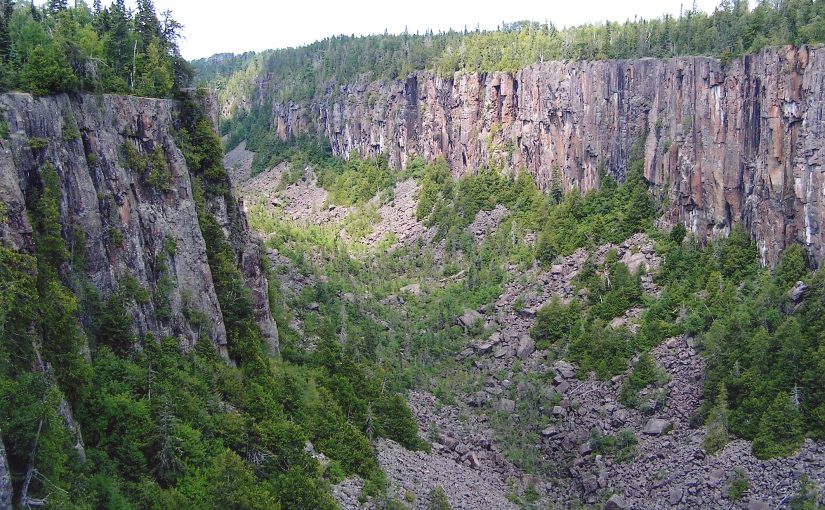 Ouimet Canyon Provincial Park is typically visited for its jaw-dropping geological feature, but it’s also one of the better birding hotspots in the Thunder Bay area. Ouimet Canyon Provincial Park has a variety of upland and lowland habitats, and therefore supports a wide diversity of birds. When entering the park, there is an upland stand of Trembling Aspen and White Birch on the west side of the road. On the east side is an open water and cattail marsh known as the Gulch Slough. A parking area at the end of this road just prior to the turn to the west is a good location to park and work your way back southward along the road’s edge.

On the opposite of the road in the upland habitat, common birds include Winter Wren, Golden and Ruby-crowned, Red-eyed and Blue-headed Vireo, Yellow-bellied Sapsucker, Hermit and Swainson’s Thrush, and Veery.

The canyon is deep, wide, and immense.

Visitors enjoy stunning panoramic views of a 150 m wide gorge and sheer cliffs that drop 100 metres straight down to the canyon floor.

The top of this feature is accessible by a trail and boardwalk that connects two lookout platforms with spectacular views of the canyon.

The canyon also provides nesting habitat, year after year, for Peregrine Falcons. Have your ears ready to hear their loud squawks. A set of binoculars or a good scope can be used to scan the rock ledges along both sides of the canyon for a resting falcon. The birds rarely disappoint visitors, provided you put in the time to wait for them to make an appearance.

Perhaps the most thrilling occurrence here is a pair of Barred Owls, often viewable at the parking location. This pair and their young have entertained many visitors during the Dorion Canyon Country Birding Festival.

The Nor’wester Mountains and Boreal Forest

Another part of the Thunder Bay and surrounding area that is unique are the giant cliffs and canyons, including the Nor’wester Mountains. The mountains in the area are typically flat on top, protected by hard igneous rock known as “diabase” which formed from ancient volcanoes approximately 1.1 billion years ago. The cliffs were formed from erosion by wind and water from the sides, which undermined the integrity of the hard rocks on the top. When continuing into the park, you will drive to the top of one of these hills as you make your way towards the facilities and trail system that leads to the viewing platforms.

During the drive, take note of how the habitat transitions into a drier, and more conifer rich mixed woods. At the parking area, the forest is nearing 100 years old, which is mature Boreal Forest for this region. Jack Pine and Black Spruce are the dominant species, White Birch and Trembling Aspen make up the minority. It is here birders are more likely to witness some of the older growth specialists such as Grey Jay, Brown Creeper, and nesting Dark-eyed Juncos.

The opportunity for viewing some of the mature Boreal Forest species also increases. Keep your ears open for calling Tennessee Warbler, Cape May Warbler, Northern Parula and Blackburnian Warbler.

Also noticeable along the trail at the bridge crossing is a considerable amount of White Pine. It was here in 2015 that three guides during the Dorion Canyon Country Birding Festival believed they were hearing a regionally rare Pine Warbler calling from the tops of the White Pine. Without a visual confirmation however, this observation remains unconfirmed.

So why do Ouimet Canyon and the Thunder Bay area provide so many unique birding opportunities?

1. The area is situated at the transition between the Great Lakes-Saint Lawrence and Boreal Forests

This transition in habitat offers an opportunity to view bird species with both Southern Ontario and Northern Ontario affinities.

2. It’s situated along Lake Superior, the largest of the Great Lakes

Lake Superior significantly influences bird movement and migration patterns through the area. Many bird species are unable to fly across the large body of water (190+ km in the middle) and instead are forced to travel around the lake during migration.

Other species will cross the lake at strategic locations where the travel distance is shorter, such as from the tip of the Sibley Peninsula at Sleeping Giant Provincial Park, then over to Isle Royale National Park in Michigan, and then to the southern shores of Lake Superior.

The lake itself attracts a variety of waterfowl, both summer residents and migratory waterfowl / shorebirds travelling north to Hudson Bay or the high arctic.

3. The area is situated amongst several North American flyways

Thunder Bay sits at the north end of the Mississippi Flyway, but it’s also sandwiched between the Central and Atlantic flyways.

What this means for birding is that although bird species like Canada Geese and Snow Geese do not migrate through in the large numbers that are seen in the centres of the Atlantic or Central Flyways, the opportunity for rarities ending up in the Thunder Bay Area from the east or the west is quite high. Some examples of these odd occurrences in the last few years have included a Sulphur-bellied Flycatcher (Central America species), Lewis’s Woodpecker (found west of the Great Plains), Anna’s Hummingbird (summer pacific coast resident), and multiple White-winged Doves (summer resident of southwestern united states).

When to visit Ouimet Canyon?

The best time to bird in the park is from May 20 to about June 15. At this time, you’ll be able to pick-up breeding summer residents as well as migrants through the area.

Orange-crowned Warbler and Blackpoll Warbler are definitely flittering through in late May, as well as August and September. But any time the park is open there is a tremendous opportunity to see some very unique geological formations along with a great birding outing.

If you’re interested in visiting, below I have provided a sample checklist, created using eBird.