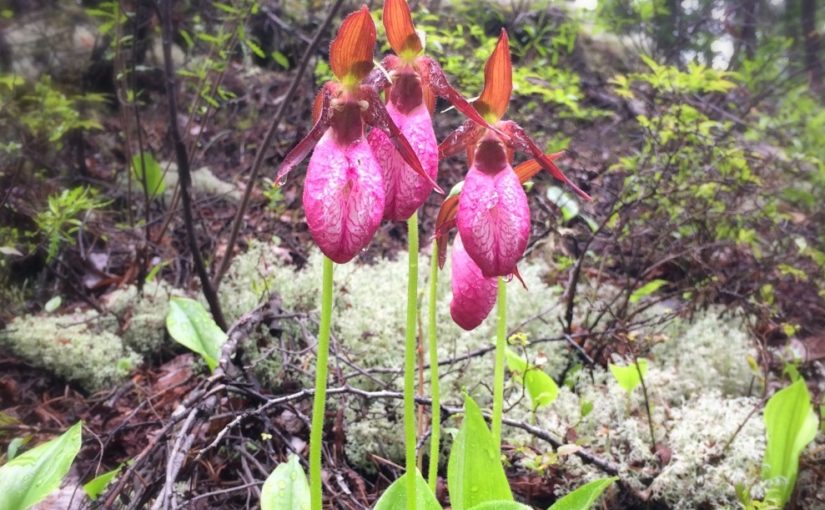 When you hear the name “orchid,” you may automatically think of some bizarre or fantastically coloured flower from some remote and steamy tropical jungle.

But not all orchids hail from tropic climes.

If you’ve taken a hike in the woods in many of our provincial parks you’ve probably seen some native orchids.

Some Ontario orchids are very pretty, while others are quite subdued.

Moccasin is an Anishinaabek word. It is used by the Ojibwe, Nipissing, Algonquin, Mississauga, and Odawa peoples to describe the familiar set of Indigenous footwear that many of us use as slippers.

The distribution of Moccasin Flower across the eastern part of North America matches fairly closely the territories of Anishinaabek people.

Also commonly called the Pink Lady’s Slipper, or the very cool name Whip-poor-will Shoes, the Moccasin Flower may look delicate, but is a hardy plant, able to withstand the cold winters of northern Ontario.

There are a few lady’s slipper orchid species in Ontario: Showy, Ram’s-head and Yellow all have that “slipper” or “moccasin” look.

The flower has just three petals: two small ones twist above on either side, while the third has grown much larger and forms the “slipper” below.

We mentioned that it has an interesting life…

With its bright pink flower and an enticing scent, Moccasin Flower is an inviting target for our native bumblebees. They crawl into the slipper searching for nectar, but find none.

The flower’s edge is turned inwards so the bee can’t back out and must turn around in the slipper. It passes under the flower’s stigma and deposits pollen from other flowers that have stuck to the bee. On its way out, the bee is coated with pollen again, which it takes to other Moccasin Flowers, pollinating them, and also getting no nectar.

The plant fools the bee into pollinating it and saves precious energy by not producing nectar. But the bee learns after a few visits to Moccasin Flower, so the flower needs a constant stream of young bees that don’t know they are being tricked.

Without this, the flower will not be pollinated.

So pollination is a sketchy business, but if the flower is pollinated and produces seeds, it gets more interesting…

The seed won’t germinate (or sprout) unless conditions are just right.

In perfect conditions, fungi (found in thin strands in the soil in great numbers), attach themselves to the orchid seed, and begin to feed it (!!!). The seed slowly grows into a “corm,” a thick underground plant stem where the roots and leaves grow from. The lady’s slipper hasn’t grown any roots of its own, and would die without the help of the fungi.

Over several years, the orchid grows its root system, all the while being fed by the fungi. Once the roots are grown, the orchid can then grow a bud, and leaves begin to develop. Now that it can feed itself, it’s time to pay back the fungi – the orchid’s roots now provide the fungi with nutrients.

This approach to procreation seems pretty tenuous, relying on fungus, the perfect conditions, and some not-too-bright bees to produce a seed that seems to take forever to get back to the flower stage.

The orchid has a back-up plan however…

The Moccasin Flower also grows underground stems called rhizomes, which spread out from the main plant and sprout new shoots that can become flowering stems and leaves. If left undisturbed, one Moccasin Flower orchid can grow into a large colony, with many flowers clustered together. Some of these large plants can be over 100 years old!

Because of their vital connection to forest fungi and their intricate life cycle, they do not grow or transplant well to gardens, so gardeners and the rest of us have to enjoy them in their native habitat.

Where can you see the Moccasin Flower ?

They are found across central and eastern Canada, and into the eastern United States, in a range of habitats.

As we’ve mentioned though, they grow best where they are undisturbed, which makes Ontario Parks a good place to spot them.

In northern parks, the orchids flower into July.

Don’t forget to tag @Ontarioparks when you post photos of orchids and other flora from along our trails!