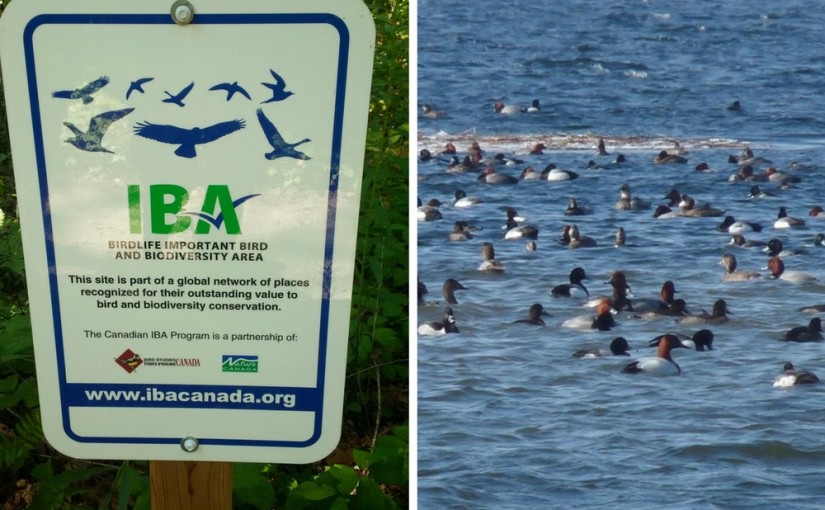 Not the kind made of pavement (they can actually be hard on nature – read more about ecopassages here), but the unbroken swaths of forest that connect natural areas to each other so animals can migrate and move across the landscape.  These nature corridors are especially important to help plants and wildlife (including species in our parks) adapt to climate change.

In fact, wildlife highways (or corridors) and habitat are one of the things we think about when creating parks and protected areas.

Bird highways are especially important because many of them make such perilous long distance migrations. Some even travel from Ontario’s boreal forest to South America and back every year.

Many of these highways are designated as IBAs

In Canada, ornithologists (bird scientists) have established a program to identify, conserve and monitor habitat that is essential for Canada’s bird populations.  These sites are called Important Bird Areas (or IBAs, for short).

Protecting IBAs is a practical way to conserve biodiversity. Bird habitat isn’t just for the birds; it’s also used by mammals, frogs, insects and fish that are part of our natural heritage.

Many of our provincial parks are also IBAs

They include our biggest park: Polar Bear Provincial Park. Polar Bear protects one of the largest wetlands in the world, and is the summer home to over a quarter million lesser snow geese.

Many in-park IBAs are also “rest stops” on bird highways. After flying all the way across Lake Ontario or Lake Erie on their migration, birds are understandably tuckered out. Points of land that stick out from shore are magnets for tired birds – and many of these rest stops have been identified as IBAs and occur in parks.  Examples include Rondeau, Long Point, Presqu’ile, The Pinery, Fish Point and Lighthouse Point Provincial Parks.

One of our newest parks is also an IBA

Carden Alvar Provincial Park — regulated as a park only two years ago — is a favorite haunt of birders, botanists and naturalists, all drawn to the area by its curious and impressive array of habitats and wildlife.

The globally rare alvar (an ecosystem of flat rocks covered with thin layers of soil) supports an amazing array of grassland birds and is a great place to see the endangered loggerhead shrike, eastern towhee and eastern bluebird.

Here are some other IBAs located within provincial parks:

Did you know 81% of all shorebirds that breed in North America have been found at Presqu’ile Provincial Park?

Many bird species find the Great Lakes a significant barrier to cross, and a bit of land sticking out into Lake Ontario acts as a magnet. This is particularly true for small songbirds such as warblers, thrushes, flycatchers and sparrows. On certain days in May or September, it’s possible to find up to 75 different species of small birds. Presqu’ile’s habitat is also important for larger birds that aren’t really concerned with crossing large bodies of water, such as gulls, herons, cormorants and ducks. Several waterbird species often congregate in the marshes, on the sandbars, and in the waters off the island. Thousands of double-crested cormorants are regularly observed, along with various shorebird, gull, and heron species such as: dunlin, herring gulls, great egrets, great blue herons, and black-crowned night-herons.

Nestled on a peninsula jutting out in the waters of Lake Erie, the park is a globally important IBA, and an important stopover for birds making their long migrations north in the spring, or south in the fall.

Large numbers of warblers and other songbirds also congregate in the forests along the lakeshore during both the spring and fall migrations.

Polar Bear protects landscapes of international significance, including the world’s third-largest wetland, and contains not one, but two IBAs of global significance.

The largest breeding colony of lesser snow geese in Ontario is located here (approximately 280,200 geese congregate each summer!). As well, at least 6% of the North American brant population uses Cape Henrietta Maria for staging during spring and fall migration.

Don’t forget to report your sightings! Citizen scientists play a big role in helping protect our feathered friends. In fact, IBA Canada gets a lot of its information on bird populations from programs like eBird. If you’re a birder, you can play a crucial role in tracking and protecting Ontario’s bird species.

So when you’re exploring these parks (or any IBA in Ontario), please report your sightings!

You can also by contacting your local IBA Caretaker to find other ways to help.