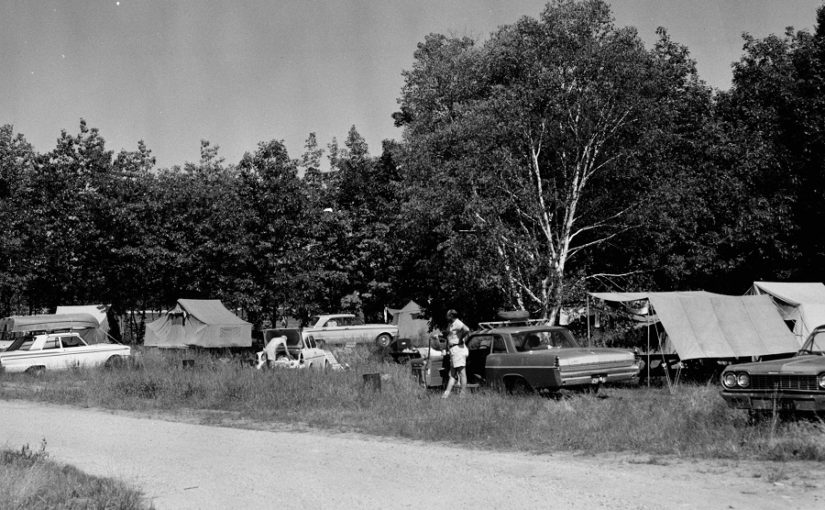 It’s the summer of 1963. Lester B. Pearson has just been elected the Prime Minister of Canada, and “It’s My Party” by Lesley Gore is topping the CHUM chart.

Ontario is enjoying a year of economic growth, riding on the tails of a booming manufacturing sector. One of the most popular summer vacations is camping at a provincial park.

But campers were a lot different in 1963 than they are today. Let’s take a look at some of the differences between what campers were like in 1963, and today. Recently, when Ontario Parks’ staff were cleaning up files in the Peterborough office, they discovered a spreadsheet that outlined park visitation in 1963.

What does a 1963 spreedsheet look like – before personal computers and excel files? It’s a single piece of paper, seven feet by two feet, carefully ruled with columns and rows.

The numbers of visitors from each region of Ontario, other provinces, states, and overseas are neatly handwritten for each park. Numbers are subtotaled by category and region, with a final grand total at the bottom. Remember, the pocket calculator wasn’t available until the 1970s. At best these numbers were totaled on an adding machine, but perhaps they were added by hand. Just imagine! The 1963 parks system looked a bit different than today. In 1963, there were 69 camping parks, versus just over 100 today. Many of today’s favourites were there in 1963: Rondeau, Pinery, Balsam Lake, Esker Lakes, Killarney, and Rushing River, to name a few.

A few parks are no longer part of the Ontario Parks system. Holiday Beach joined the Essex Region Conservation Authority, and Clay Creek became part of the St. Clair Parkway.

Do campers still come from the same places?

What changed? In 1963, the border between Ontario and the U.S.A was very open. You could actually cross without a passport! Airline travel was an expensive luxury, and road trips were the rule for summer vacation. In 2018, travellers have many more options for where to take their vacations.

In 1963, overseas visitors were a rarity at Ontario Parks. Just over 0.25% of campers came from outside Canada or the United States. Today, international campers are still relatively rare, but make up almost 1% of campers. Algonquin is a popular destination for visitors from Germany, Netherlands and Switzerland. So what’s up?  In 1963, Toronto was a medium-sized city, not the centre of a big urban concentration like today.   Now, Torontonians today have to work harder to get out of the big city to reach parks.

Also, the make-up of Toronto has changed. New Canadians have fueled much of the growth of the area. Many new Canadians have not had the experience of camping as children, and are less likely to visit parks as adults. Ontario Parks is working to reverse this trend through programs like Learn to Camp.

What’s going on? One theory is that modern families feel more pressed for time.  Today’s children have programmed activities during the summer and people feel that they can’t leave their daily lives for as long.

Park staff still care about measuring who is visiting parks, and ensuring that all Ontarians are taking advantage of our amazing parks system.