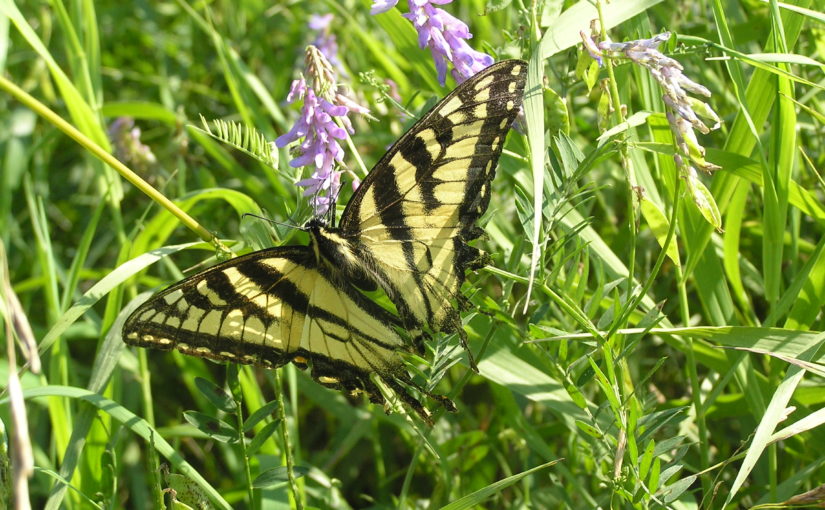 This is a vibrant, colourful time of year at Charleston Lake Provincial Park, with lasting sunshine and seemingly endless days. June and July are also when butterfly watching is at its best!

Some of the park’s most showy butterflies are the tiger swallowtails, known for their large size, distinctive colours and streamer-like “tails” on their hindwings.

These butterflies are aptly named, being yellow with bold, black tiger stripes.  You can readily see them, patrolling along forest edges or seeking nectar from various flowers. Here at Charleston Lake, we have not one but two types of these dazzling “tigers,” the Eastern Tiger Swallowtail and the Canadian Tiger Swallowtail. However, being closely related, the two are difficult to distinguish.

The more southerly Eastern Tiger Swallowtail is a little larger (7-10 cm wingspan) and has a slightly narrower black band on the inner hindwings. Its range extends south to Florida and in Canada reaches only into southern Ontario. It is double-brooded, meaning there are two generations flying per year.  The first flies in late May and June, with adults from the second generation flying in July and sometimes into August.

The smaller (5-9 cm) Canadian Tiger Swallowtail is the more northerly of the two, extending north to Yukon, and south into the U.S. along the Appalachian Mountains. Its pupae (cocoons) can survive colder winter temperatures than the eastern variety.  It only has one generation per year, usually from late May to late June (therefore a tiger swallowtail butterfly seen in July or August is almost certainly an eastern).

As adults, butterflies tend to have a typical daily schedule.  In the morning they spend time sunning themselves to raise their body temperature and warm up their flight muscles.

Butterflies, like all insects, can’t warm up on their own as we humans and other mammals can, and depend upon the sun to warm them up. Once warmed, they visit flowers for nectar, a sugary liquid food source.

Once fed, male tiger swallowtails spend much of the afternoon searching for females. They fly back and forth patrolling the same route, often along streams, roads, or the edges of open fields. A male will follow a female that he encounters and try to mate with her. A female not interested in mating will close and flatten her wings to prevent him from grasping her. A mated female, once warmed and fed, begins the critical task of searching for plants to lay her eggs on, such as cherry and ash trees here in the park (although the less fussy Canadian Tiger Swallowtail also lays on poplar trees and willow).

She prefers to lay her eggs on exposed leaves on the south side of trees and less than 2.5 m high, presumably for increased heat from the sun and less wind exposure. Higher temperatures speed up the development of the caterpillars that emerge from the eggs, which is critical. Faster development means less exposure to bird predators or parasites.

These caterpillars have huge false eyes which make them look snake-like and more intimidating, potentially warding off predators. They also have a special forked, tentacle-like appendage (unique to swallowtails) which comes out from behind the head when disturbed. This appendage emits a foul odour and is believed to be a defense against predators, particularly ants. While tiger swallowtail caterpillars rely on camouflage, this isn’t the case for the conspicuously coloured adult butterflies. To avoid the many hungry birds out there, Tiger Swallowtail adults use ingenious trickery.  Each hindwing has a pattern of lines which converge on the inner wing where there’s a blue spot and a long, streamer-like “tail.” This creates the appearance of a “false head” on the bottom of the hindwings (the farthest point from the real head) with “eyes” (the blue spots) and “antennae” (the tails). A potential predator may be drawn to this false head, rather than the true head and body.

It’s not unusual to see tiger swallowtails missing sections of their hindwings, where their tails once were. A butterfly can live with a damaged wing, but is less likely to survive an attack on its head and body.  Keep an eye out for butterflies with damaged hindwings with beak-shaped tears.

A sight to be seen

Another fascinating aspect of tiger swallowtail life is the tendency for them to congregate at puddles or wet areas in large groups (hundreds of them!) jostling for position. Tiger swallowtails seen at puddles will almost always be males.

But why only males? Well, the males are seeking salts in the wet ground around puddles, as sodium is naturally low in most plants that butterfly caterpillars feed upon. The adult males in turn pass the sodium to females in a spermatophore, a large “nuptial gift” (weighing up to half the weight of a male) which is deposited in the female during mating. The sodium is needed by females to produce eggs. Look for these “puddle clubs” of congregated males, as they are quite a remarkable sight!

The Eastern & Canadian Tiger Swallowtails are two of 70 species of butterflies recorded in Charleston Lake Provincial Park alone, and two of the most recognizable.

While in the park, keep an eye out for these boldly coloured and fast-flying butterflies. It’s not hard to spot one of Charleston Lake’s dazzling tigers!