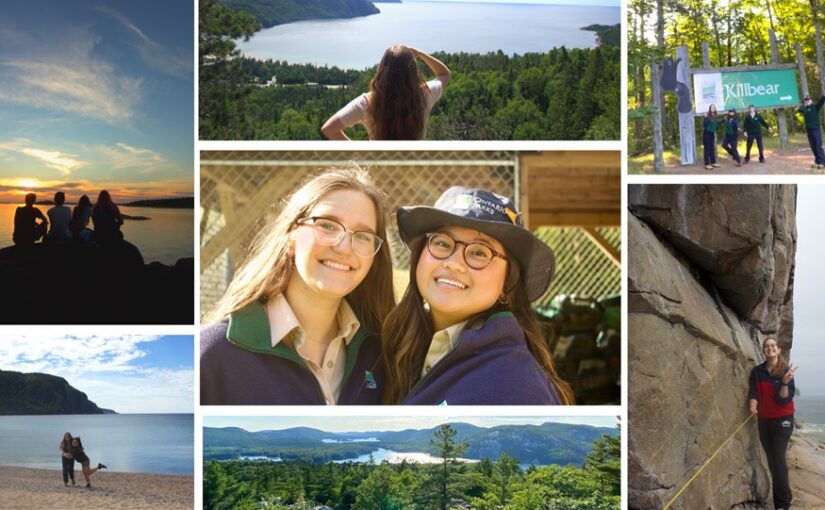 Today’s story comes from Park Staff Besties: Zuzanna and Alysa, summer staff working at Killbear Provincial Park who spent their season visiting over 30 provincial parks! Are you interested in joining us for the 2023 summer season? Applications are now open!

“You work and live in a provincial park? What do you do on your days off?”

“Camp at other provincial parks!”

If you asked staff at Killbear what they thought of the two of us, they would say we are “attached at the hip.” We met last year working as gate attendants in Algonquin Provincial Park and moved to Killbear this season.

Not knowing anyone else at this park, we requested to be roommates at our new staff house and have been going almost everywhere together ever since!

Working and living at Killbear this past summer has been an absolute dream. With the pristine sand beaches, rocky shorelines and picturesque sunsets, we were curious to see what other provincial parks had to offer and decided to make the most of our summer season living up here!

Growing up and living in southern Ontario, working at Killbear was a great opportunity to explore and experience northern provincial parks.

I work as the administrative assistant at Killbear. I’m learning all the behind the scenes working in a provincial park: timesheets, expense claims, answering phone calls, and sending emails — a complete 180° turn from my previous blackfly-infested job, working during the summer heat in a canoe, paddling the largest lake in Algonquin Provincial Park.

I worked in the interior for a few summers and then transitioned to a gate attendant role in Algonquin.

From there, I enjoyed smelling less like DEET and became accustomed to the air conditioning.

I loved being able to be the bridge between campers and nature! Sharing my passion for recreation and conservation through interactions with campers sparked excitement in me.

So, I explored the different types of jobs parks opportunities and moved to Killbear.

I’m extremely grateful and love what I do for the park in the office, but I definitely missed spending most of my days in the great outdoors.

This is my second year in parks.

I worked in Algonquin last year and moved here to Killbear as a gate attendant. Moving parks was an adjustment for me, but it was great knowing I had someone who was going to be there with me.

Through my role as a gate attendant I enjoy sharing with campers the enjoyment that parks and the outdoors brings!

I wanted to explore Ontario’s provincial parks more this summer to learn and experience what other parks had to offer.

I used to be in Scouts, so I spent many of my summers exploring provincial parks growing up, including a lot of interior trips. Hiking the Western Uplands and portaging in Algonquin was just a couple of trips I enjoyed.

The excitement I get from exploring nature shows through my work with campers and being able to spontaneously go to surrounding parks has been surreal. Being able to work at parks has been a dream and has opened up so many opportunities for me to express and enjoy myself.

“You camp for a night and leave at what time?!”

If you’ve ever worked in parks, you know working weekends is a must.

However in Alysa’s role, she gets all weekends off!

It was hard for us to even begin planning any sort of trips due to our inconsistent schedules. We figured since we wouldn’t be able to align our scheduled days off, we could just go on spontaneous camping trips right after work with little to no planning — just us, a car, a tent, and our uniforms ready for our shifts the following morning.

Our first trip was to Killarney Provincial Park.

Finishing work at 4:30 p.m., we asked around the staff house if anyone else wanted to join our spontaneous expedition, where two other girls agreed.

Rushed and excited, the four of us (over)packed our gear, some dinner, and (of course) our uniforms into a little hatchback.

It was a 2.5 hour drive with the traffic, stops, and seat adjustments due to being  squished in the car. We made it to the gate office just in time for check-in. It was an easy process since we pre-registered online (we know how much this helps gate attendants)!

We set up, made dinner, and ate by the lake.

We had a fire, then watched the stars as we walked around the campground.

We woke up at around 4:00 a.m., packed up slowly, and headed out to drive back to Killbear.

We did this multiple more times throughout the summer, leaving after our shifts ended and heading back early the next morning at 4:00 a.m.

We camped or spent the evening in around 30 provincial parks, including:

We always talked about wanting to visit more northern parks and knew we needed more than a night to explore the region.

We managed to book the same days off nearing the end of our season and planned a trip to Lake Superior. Like always, we took off right after our shifts ended at 3:15 p.m. and just kept driving!

It took 5.5 hours to reach Pancake Bay Provincial Park from Killbear, where we had reserved a one night stay. We hiked the Pancake Bay Nature Trail the following morning, it was 5 km to the lookout point. It was relatively flat for the most part… until you reach the stairs, but the view was worth the muddy boots and bug bites!

We then travelled from Pancake Bay to Lake Superior Provincial Park, which was another hour of driving. We checked into our site at Agawa Bay and asked the friendly park staff for some trail recommendations.

We saw the Pictographs and drove the whole scenic way up to Wawa.

After a quick swim at Old Woman Bay we decided to head back to Killbear.

On the drive back down, we got to spend time at the parks in between Lake Superior and Killbear off of Hwy 400 including Batchawana Bay, Chutes, Mississagi, and Fairbanks!

While we didn’t get to spend much time at these parks, we still picked up park crest stickers for our passports!

Try a summer with Ontario Parks!

The friends you make at Ontario Parks are friends that will last a lifetime!

It’s a great opportunity to work in a career you might be interested in and spend the whole summer season with like-minded people who have the same interests and love for the outdoors.

Our friends who used to work at Algonquin moved to the many parks we got to visit this summer. It’s interesting seeing the roles our friends are now in — as wardens, park clerks, and even assistant superintendents!

To all future student rangers: make the most of your seasons by exploring parks and the many student positions Ontario Parks has to offer, you never know where you’ll end up!

We are both very grateful for the friendships we have made and the experiences we have gained to further our careers in parks.

There are just so many more people to meet and parks to see, we can’t wait for what the next camping season brings!

Want to join us for the 2023 season? Learn about the positions available at parks across the province!