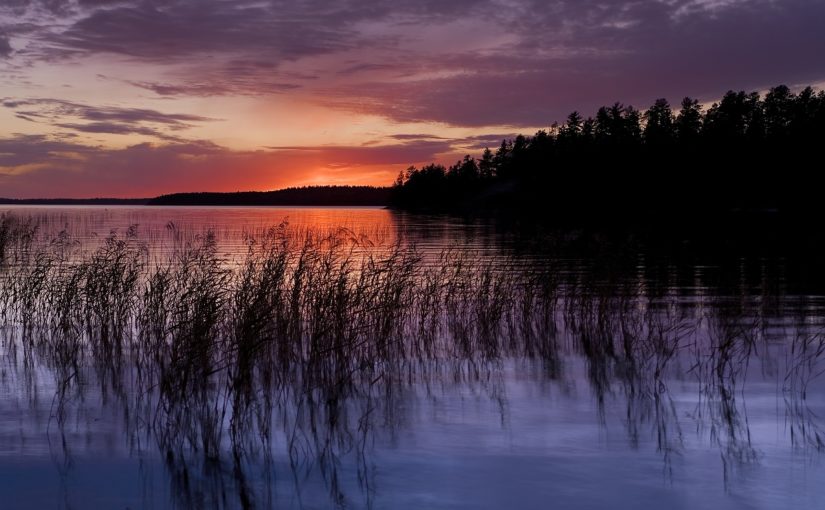 When the park was established in 1944, it was named Sibley Provincial Park after Alexander Hamilton Sibley. Sibley was the President of the Silver Islet Consolidated Mining Company that operated in the area from 1869 to 1884. In 1988 the name was changed to Sleeping Giant Provincial Park. The Sleeping Giant is an iconic landform that resembles a giant sleeping on its back when viewed across the landscape. The name change was meant to raise the profile of the park, and clear up the common misconception that the Sleeping Giant is an island in Lake Superior.

The Sleeping Giant is actually part of the greater Sibley Peninsula within the park. By the way it juts out into Lake Superior, it looks like an island from some angles. Wabakimi Provincial Park is a wilderness park located near the town of Armstrong. Its backcountry canoe routes offer a network of options for paddling enthusiasts, and it’s one of the featured parks of the Northwest Wilderness Quest.

It is suggested that the word Wabakimi originates from the Ojibway word “Waubishkaugimi,” meaning “whitewater,” which refers to the river rapids in the park. Another possible origin is the word “Wabishkkegin” meaning “the sheet is white,” which invokes the vision of a calm lake reflecting the sun. “The name Quetico comes from the Ojibway word, ‘Gwetaming.’ This refers to how we view this sacred land. There is a place in the park that is named Quetico Lake. The lake is sacred, meaning it is occupied by living spirits that have been here since time immemorial. You hear stories from our elders of unexplained and unusual events at this lake, which can only be explained by our spiritual ways. The Lake is very spiritual and sacred to us. We are told to be mindful and respectful of the power it holds. ‘Gwetaming’ means we sacredly respect that area for the spirits that dwell there.” Nestled in the north shore of Lake Superior between the towns of Marathon and Terrace Bay, Neys Provincial Park boasts a stunning sand beach, rocky coastline, and amazing views of Lake Superior.

With a history involving Indigenous peoples, voyageurs, prisoners of war, the Group of Seven artists, loggers, fishermen, ship crews, and railway workers, the landscape of Neys tells many stories. The Canadian Pacific Railway runs along the northern boundary of Neys Provincial Park where historically, there was a railway siding. A railway siding is a stretch of track where trains could stop to refuel, pick-up water, and allow other trains to pass on the same line. Since this siding was called Neys, the park took on that name when it was officially regulated in 1965. It’s suggested that the siding was named after one of the young men who worked as a novice, building the railroad through the area in the 1880s. One source states that Neys is an abbreviation of the name Doheyneys, which may have been the man’s name. A mere 15 minutes east of the town of Dryden, Aaron Provincial Park is a perfect stop for cross country travellers. The park is located on Thunder Lake, a remnant of ancient glaciers that covered Ontario tens of thousands of years ago.

During the 1880s, the Canadian Pacific Railway was constructed adjacent to the present day location of Aaron Provincial Park and the area was opened up for settlement. In 1906, the land that is now Aaron Provincial Park was sold to John D. Aaron, who the park was eventually named after. In 1935, the recreational value of the site was recognized, and the Department of Northern Development established it as a roadside camping park for travellers and local residents. In 1958, the park was regulated as a provincial park. This park is located 32 km west of Thunder Bay on the Kaministiquia River. Kakabeka Falls is one of northwestern Ontario’s best known natural features, and is the main attraction of the park. A boardwalk wraps around the top of the falls, providing access to stunning views of this 40 m high waterfall.

In 1859, Paul Kane, a famous Canadian painter, wrote “We arrived…at the Mountain Portage, whose falls surpass even those of Niagara in picturesque beauty…their height is nearly equal and the scenery surrounding them infinitely more wild and romantic.” It is said that Kakabeka is derived from an Ojibway word meaning “sheer cliff” or “thundering waters.” The thundering waters of the second highest waterfall in Ontario and the cliffs along the river are gorgeous!

What does a park name mean to you?

Next time you visit one of northwestern Ontario’s provincial parks, consider it’s name and where it might have come from.