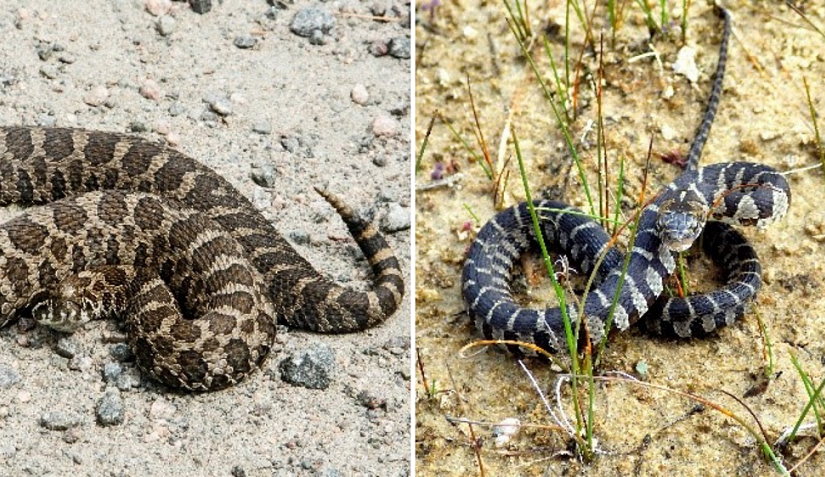 However you feel about them, they are an important part of our ecosystems, and you may see one when you visit us.

Here at Killbear, we get a lot of questions about snakes, and especially the difference between watersnakes and rattlesnakes as they are often confused for each other.

Visitors are concerned because they know rattlesnakes are venomous, and often assume that any snake they see must be one.

While both have dark patterns and enjoy basking on rocks, the two species are quite different!

Here are some tips and tricks to tell them apart:

The tail: Massasauga Rattlesnakes, like all rattlesnakes, are well known for the distinctive rattle on the end of their tail. All other snakes have tails that taper to a point. If you can see the end of the tail, that should help you decide which species of snake it is.

If you can’t see the tail (and for the handful of “stealth” Massasaugas that have lost their rattle and now have tails that end in a stub), look for some of the other field marks that distinguish the snake from other species (“field marks” are characteristics that help to identify birds, butterflies, and even snakes!).

The head and neck: Massasauga Rattlesnakes have a large, triangular-shaped head with a very distinct thin neck behind it. This is because their venom glands are stored at the back of their heads, in their “cheeks,” which makes that part wider, emphasizing their small neck.

Watersnakes have a head that transitions smoothly into their body, with little to no neck. The pattern: The pattern on watersnakes and rattlesnakes looks very different. Massasaugas have a series of dark brown “blotch” patterns down their back. These blotches are often described as bow-tie or butterfly-shaped. The blotches are positioned on top of the back of the rattlesnake and they do not reach down the sides of their body.

Watersnakes, on the other hand, have more of a “banding” pattern. Their dark patterning is visible on the top of their body, but you will also notice that it spreads farther and reaches down their sides too.

Watersnakes can have a lot more colour variation, sometimes they are almost completely black. The patterning that snakes have helps them camouflage from predators.

Where they live: Watersnakes like water! They tend to be either swimming in a body of water or basking very close by. They even catch their food – frogs, tadpoles, and even fish – in the water.

Rattlesnakes — while they can swim — are less likely to be out on open water, and are usually found basking on rocks or in forests farther inland. A little-known fact about Massasaugas is that they are very loyal to their homes. Every rattlesnake will find its own hibernation site during its first winter, and many use the same site every year for the rest of their lives. During the summer months, rattlesnakes rarely travel more than 2 km from their chosen site!

How they swim: Watersnakes swim with just their heads above the water.

Massasaugas will have their whole body floating on top of the water when they swim, like a pool noodle!

Worried about encountering a rattlesnake?

Keep this in mind: Massasauga Rattlesnakes are very shy. They camouflage well, and don’t want anything to do with people.

If you see a rattlesnake when you’re camping, that’s an awesome sighting! Massasaugas are a threatened species and are extremely rare to see. Eastern Georgian Bay is one of their last refuges.

Yes, they are venomous, but they want to save their venom for their prey (usually Meadow Voles). They don’t want to waste it on a human.

In fact, their rattle is a built-in warning mechanism to let you know that you’re too close! If you hear that buzzing sound: stop where you are, locate the snake, and give it a wide berth. Normally, we recommend a 2 m distance. It will move off on its own.

Love snakes? We still want you to keep 2 m away to make sure that you don’t stress the snake out. Also, a stressed snake is more likely to protect itself by biting!

Instead, snap a pic if you can from a safe distance. We’d love it if you posted the sighting on iNaturalist and/or share it with your park’s staff. Massasauga Rattlesnakes are a species at risk, and your sightings help our conservation work.

If you see a rattlesnake on the road or your campsite, please contact park staff immediately. Please watch the snake from a safe distance until park staff arrive.

Thank you for assisting our research and protection efforts!