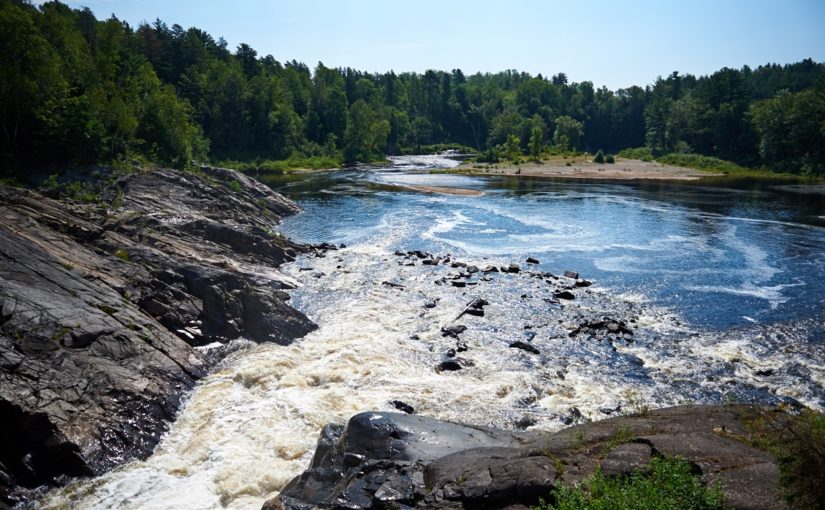 Temagami is a big region that contains seven operating parks (five backcountry and two campground parks). Here are some of the stories of how they came to be named.

William Finlayson was an Ontario MPP and Minister of Lands and Forests in the 1920s. The park’s origins began with the Ferguson Highway: a gravel road linking North Bay and southern Ontario to the mining town of Cobalt and the farming district of the Little Claybelt. This road was built through a “pinery” (a pinery was any large forest of pine trees considered an important resource in the 1800s and early 1900s) around Marten River and the Temagami Provincial Forest. When the road first opened, there was some concern about travellers starting forest fires in the valuable timberlands. This led to the development of “campsites” that had sturdy fireplaces to keep wayward sparks in. This large wilderness class park was named for two of its main waterbodies, Smoothwater Lake and the Lady Evelyn River.

Lady Evelyn Lake was named by Robert Bell, surveyor for the Canadian Geological Survey in the 1880s. He named it for Lady Evelyn Campbell, sister of Governor General Sir John Douglas Campbell, who Bell met and may have had a crush on… The Anishinaabe have names for the different branches and main channel of the Lady Evelyn River. The main channel is called “Ma-ja-may-gos,” meaning Brook Trout, and “Zee-beeng,” meaning river, or at the place of the river.

The Marten River that flows through the park was the inspiration for the park’s name. The river was named after the Pine Marten, which lives in the pine forests of the Temagami Region. Pine Marten prefer conifer forests because their main prey is the Red Squirrel. Red Squirrels are great consumers of pine seeds, and pine trees have strategies to foil the squirrel’s attempts to find, store and eat as many seeds as possible. These strategies include not producing cones in some years, and then producing a bumper crop — more than the squirrels can consume. The Pine Marten is the Eastern White Pine’s friend, helping to limit the squirrel population.

Solace Provincial Park is named for Solace Lake, one of a chain of lakes within the park that make a link from the Sturgeon River to Florence Lake in Lady Evelyn-Smoothwater Provincial Park. “Solace” means comfort in a time of distress. Being surrounded by nature is known to reduce stress. Solace Lake and its neighbouring lakes are remote and only accessible by portaging from surrounding lakes, or by float plane.

The Sturgeon River has its headwaters in the highlands of Lady Evelyn-Smoothwater and surrounding landscapes, and flows south 170 km to Lake Nipissing. Lake Sturgeon travel into the river in the spring to spawn. Historically, sturgeon was an important food source for the people of the Nipissing Nation after a long winter.

People would gather, reconnect with other families they hadn’t seen in several months and fish for sturgeon. The river is called “Nah-may Zee-beeng” in Anishinaabe (Sturgeon River).

The Ontario north is vast and has varying features and landscapes. These are the stories behind some of the other park names in the northeastern part of the province. An esker is a long, snake-like hill, originally formed by rivers of glacial melt water. When the glaciers began to melt, rivers of melt water flowed over and through the ice, and debris (sand, gravel, silt and boulders originally frozen in the ice) collected in these rivers and formed a river bed. When the glaciers melted completely, the river bed was all that was left, and these formed today’s eskers.

In the early 1900s, there was a logging camp on the shores of Halfway Lake. Each winter, lumberjacks worked with horses to haul logs to the lakes, and later drive them to the railway using the streams and rivers during the spring flood. The park’s campground occupies a flat sandy area at the north end of Halfway Lake with the perfect shallow, sandy beach for families with young children – this was where the logging camp was located. The camp was “halfway” between the main logging area and the railway line where the logs were loaded for their trip to the sawmill, and called Halfway Lake as a result.

Originally called Shebahonaning (Anishinabek for “safe canoe passage”), the Village of Killarney sits on the narrow channel between George Island and the mainland. The village was founded in 1820 as a fur trade post by independent trader, Étienne Augustin de Lamorandière and his Anishinaabe wife, Josephite Saisaigonokwe. A “maritime” village developed, accessible only from Georgian Bay, with commercial fishing, logging and some small farmsteads occupying the residents. The village was connected to the rest of the province by steam ships that plied Georgian Bay, and its strongest local connection was with Manitoulin Island. Sometime after its founding, the La Cloche Mountains and peninsulas of the coast, reminded someone of the similar landscape of Killarney in Ireland, and the village (and eventually the park) was re-named. Killarney Provincial Park protects the ridges and valleys of the La Cloche Mountains (an area of outstanding scenic beauty) and the Georgian Bay coast and lowlands.

The story goes that an 1800s survey crew was rowing along the south shore of Manitoulin Island mapping the coastline, and came across a farmer cutting marsh grass to use as hay for his animals. The surveyors asked the farmer what this bay was called, and in the heat of summer he responded, “Misery.” Today, Misery Bay Provincial Park is an important nature reserve on Manitoulin’s southwest shore and is anything but miserable. This day-use park has a nature centre and 15 km of trails that wind through forest, across rare limestone plains called alvar, and past the sandy beaches and rocky shoreline of Misery Bay and Lake Huron. This park is a haven for birds (warblers and shorebirds are common migrants and residents) and rare flowering plants like Manitoulin Gold (a.k.a., Lakeside Daisy).

“Missinaibi” is thought to mean “pictured waters” after the reflections of the bedrock and many Indigenous pictographs on the lake at Fairy Point. The combination of water and cliffs at Fairy Point make it a place of spiritual significance to Indigenous people, who used the rock as a canvas, painting figures of people and animals, and making offerings of sacred tobacco as they passed.

Chutes Provincial Park was named for the large “chute” or log slide that took logs safely over the main falls on the Aux Sables River. The main falls doesn’t have a name, but the many falls and cataracts upstream are known as the Seven Sisters, and can be seen from the Twin Bridges Trail that follows the river.