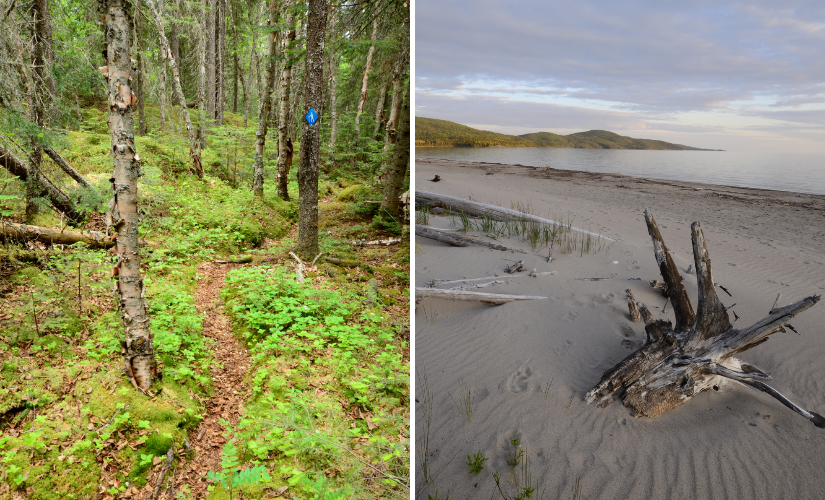 But the landscape didn’t always look this way.

The dunes have been present for thousands of years, as the Little Pic River has deposited sand along the banks of the river and into Ashburton Bay.

The bay is hugged by a long stretch of beach that the park is well known for. Waves created by the winds over Lake Superior move the sand ashore, forming the dunes.

The dunes of Neys have seen years of change. Come with us on a journey through history to explore this unique ecosystem.

Did you know that about 80 years ago, before Neys became a provincial park, the park’s landscape was actually used as a prisoner of war camp?

During World War II, the British funded the construction of Neys Camp 100 in the area that is now Neys.

To create the grounds for the camp, the dunes were flattened. They wanted the area to be as flat as possible to maximize the visibility for the guards, allowing them to keep the prisoners under supervision at all times.

Neys Camp 100 was closed in 1946 and finally dismantled in 1953, removing most of the building materials from the area.

Around this period, the dunes were left relatively bare, allowing the sand to blow freely without much tree cover to protect it from Superior’s powerful winds.

This stopped soil from accumulating, and thus prevented vegetation from taking root, leaving the landscape much more barren than it is today.

This changed in the 1960s, when the Boy Scouts of Canada planted rows of Red Pines in the dunes as part of their Centennial Project.

Red Pines are not native to the area, meaning they don’t grow naturally on their own here.

The start of succession

The flattening of dunes and planting of pines disturbed the existing ecosystem, triggering a process of change referred to as secondary succession.

This is when plants and animals return and establish themselves after there has been a major disturbance to the ecosystem.

Grasses and lichens were the first to inhabit the Red Pine plantation, stabilizing the dunes’ surface. These species can thrive in nutrient-limited environments and often play a role in the early stages of succession.

The dunes are home to a variety of lichens including Reindeer lichen, which grows along the dune surface, and Old man’s beard, which grows on the branches of trees.

Did you know that a lichen is composed of two different organisms working together to survive? This is called a mutualistic interaction, which is a type of symbiosis where both organisms benefit from collaborating with one another.

Lichen is made up of fungus, which creates its structure, and algae, which photosynthesize to provide food. With the help of the fungus protecting the algae from water loss, the algae can live in harsh conditions in which they would otherwise dry up and die.

The grasses and lichens are followed by moss that provide further nutrients to the soil, which make it possible for the first successional plants to start to grow.

Since they are not natural to this ecosystem, many of the Red Pines are reaching an untimely early demise.

While they do provide cover and stability for the dunes, fallen pine needles alter the soil chemistry to make it acidic.

This would also be the case with a natural species such as a Jack Pine, although a healthy tree will drop less needles than our aging pines.

The pines increase shade cover and reduce the ability for dune plants to photosynthesize and grow in the understory.

Beyond the edge of the Red Pine plantation lies a more biodiverse forest.

With the decline of the park’s Red Pine, the forest is now gradually being replanted.

White Birch and White Spruce, which are native to the area, are being brought in to replace the dying pines, so that we may have a more biodiverse forest in their absence.

Beyond the Red Pine plantation, the park’s forest also boasts other varieties of trees, such as Trembling Aspen, Balsam Fir, and Black Spruce.

Low-growing plants found in the dunes include Labrador Tea, blueberry, and juniper.

Labrador Tea is used by some Indigenous peoples, and historically by early settlers and fur traders, to make a tea that is high in Vitamin C, although steeping it too long may cause it to be toxic.

The dunes are also home to a variety of wildflowers, such as Canada Mayflower, Starflower, Bunchberry, Blue-bead Lily, Wild Rose, and Pink Lady’s Slipper.

The spectacular blooms of the Pink Lady’s Slipper can be observed for most of June and July. They are a special sight to behold, as each plant takes about ten years to reach blooming age.

They, like many other plants listed here, are known to grow well in acidic soil, explaining why they make their home in Neys’ dunes.

Dunes are important for so many reasons. They create barriers to flooding during storms, and protect the interior forest from winds coming off Lake Superior.

They maintain beaches by acting as a sand reserve, returning sand to beaches to compensate for erosion.

Dune vegetation prevents sand from being blown to unwanted places, like  campgrounds and roads.

These precious dunes need our help.

The ecosystem can be threatened by human activity. Pedestrian use can significantly harm sand dunes and reduce vegetation cover, as many plants are sensitive to erosion.

Next time you set foot in Neys Provincial Park, remember to stay on the designated paths.

Together we can treat our dunes with care to protect this important ecosystem.