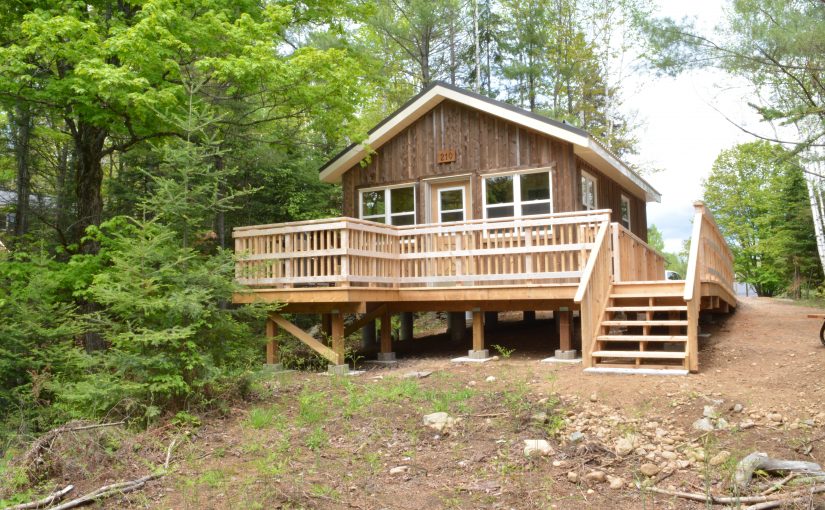 Today’s post comes from Mackenzie Green, an Operations Technician at Silent Lake Provincial Park. We’re delighted to announce the opening of 10 new cabins, which will be available on our reservation system as of June 2, 2017.

The jack-of-all trades. The problem-solver. These monikers are often used to describe the hard-working staff of Ontario Parks!

The broad scope of tasks that Ontario Parks employees undertake has resulted in a large work-force of creative problem solvers. Our remote work locations often require us to be independent, allowing us to acquire and demonstrate a wide variety of skills. As individuals, each of us brings unique experiences and skill-sets to our parks, and when a problem presents itself, we revel in the opportunity to put our special skills to work!

Recently, at Silent Lake Provincial Park, one of these unique challenges presented itself, and park staff were more than happy to rise to the occasion!

Over the past year, construction began on the development of 10 new rental cabins. These cabins will be available for reservation during both the summer and winter operating seasons, adding a new level of services offered by Silent Lake for all types of adventure seekers! These new roofed accommodations sleep up to five people, and feature a spacious deck, a screened porch, and rustic furnishings throughout.

Park staff were thrilled to see the cabins taking shape, and quickly seized the opportunity to put a personal touch on their new developments. It was decided that each cabin would have its own unique theme. First, they needed to lock in their themes. A brainstorming session became a working list, the working list became the short-list, and from the short list they chose the final ten. “The Prospector” would follow a mining theme, highlighting the historically significant industry of the Bancroft area. “Trail’s End” would offer a glimpse into the unique history of Silent Lake Provincial Park.

“Black Bear’s Den,” “Birchwood” and “Heron Heights” would each allow park users to be surrounded by images and décor centered around their favourite fauna and flora.

Signs were painted, benches were lathed, unique rustic decor was crafted by hand. In the end, park staff have added far more to these roofed accommodations than just décor. They have added a personal touch that will encourage park users to feel more comfortable, to be inspired, and to create unique experiences that they would never forget. Want to book a visit in one of Silent Lake’s charismatic new cabins? Learn more about the cabins here, or make a reservation here as of June 2 (don’t forget to select “Roofed Accommodations” from the drop-down!).