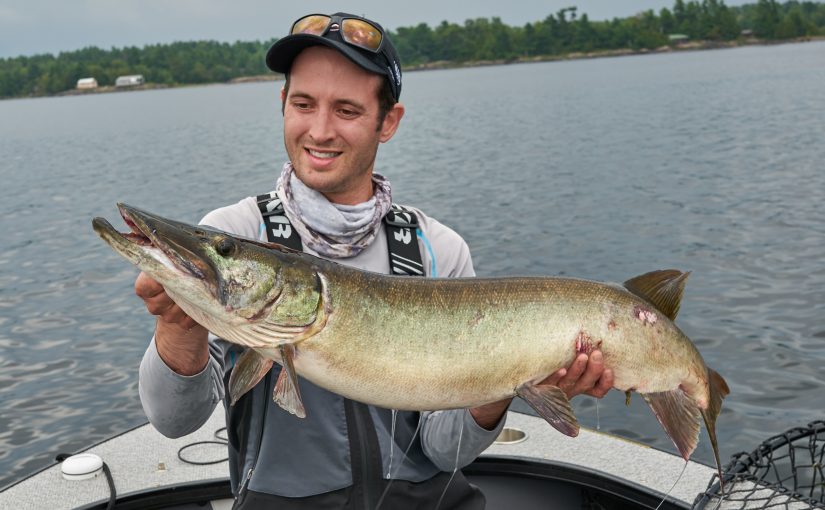 One of the most beautiful bodies of water I’ve visited throughout my fishing travels so far is the French River.

This river is unique. The French River is made up of a massive web of intertwined channels winding their way through the Canadian Shield rock face. To top it off, it’s surrounded by the breathtaking rugged scenery of the French River Provincial Park. The French River is the first ever Canadian Heritage River. As a result, the area is protected from future development. This preserves its spectacular natural beauty.

It’s evident that I love it here, but I haven’t even told you about the fishing yet!

The French River is home to a wide variety of species including Muskie, Walleye, Largemouth Bass, Smallmouth Bass, Northern Pike, and many more.

I’ve visited here twice over the past couple years and each experience was memorable. Last year while visiting with my fishing partner Eric, we explored the upper section of the river in pursuit of a variety of species. We brought along our Muskie gear with high hopes.

Throwing a large Muskie bucktail, Eric hooked into a fish within the first few casts. As I dove for the net, the fish rolled on the surface confirming that it was in fact an elusive Muskie.

Unfortunately during the battle the fish came unbuttoned. Thrilled to see a Muskie right off the hop, we had hope for another shot at one of these gorgeous, toothy creatures.

We focused on targeting Muskie throughout the remainder of our visit. While we didn’t see any further activity, I did catch a nice little walleye on a big jerk bait (called the Storm Jointed Flatstick).

We then switched gears focusing on bass, landing both smallmouth and largemouth, and even some Northern Pike as well. Although Eric’s Muskie didn’t make it to the boat, we both vowed to visit the French River again. We certainly had a blast catching a variety of species in such a beautiful setting.

This year we excitedly returned to the river and fished the lower section. Our experience played out similarly to last year, although this time it was I who had some Muskie activity right away.

Throwing a big bucktail around submerged shoal extending from an island, I had one of the largest Muskie I’ve ever seen follow my blade right up to the boat.

Without hesitation, I kept my lure in the water, extending my cast with a figure-eight. The fish turned away and vanished.

The rush and adrenaline that comes from seeing a fish this size is enough to speed up the heart rate for awhile afterward. Moving along down the shoal I had yet another follow with the same reaction. Eric was next up with a follow on a big topwater (the Whopper Plopper), and he was denied also. We were blown away at how many Muskie we saw in a short time.

After Eric’s follow, he quickly switched up to a gold and black bucktail, which turned out to be the right choice.

Just a few casts later, Eric had a fish on! This time, his Muskie made it to the boat and we were both ecstatic! A couple quick photos and back into the river it went. I was so thrilled Eric got his French River Muskie, as I’m sure he’d been dreaming about one since last year.

The French River was the last bit of Muskie activity during our trip, but we were grateful regardless. You know we’ll be back for more! It’s an amazing river to explore, and we had so much fun getting into some nice Northern Pike and some more bass too.

We can’t wait until our next visit!