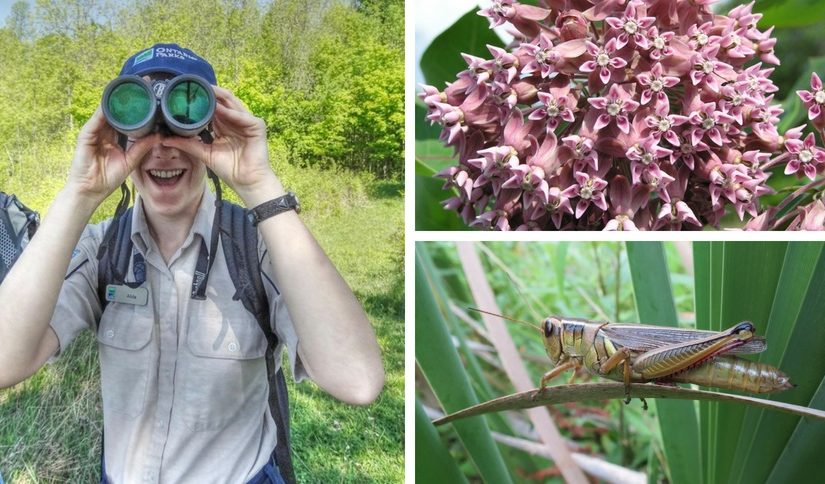 In celebration of Ontario Parks’ 125th anniversary, and with two practice runs for local schools already under their belt, the staff at Murphys Point Provincial Park are keen to invite members of the public to join them for their 2nd Annual Bioblitz on Saturday August 18.

Come and ID species in the park!

A bioblitz is a brief period of time, usually 24 hours, that experts and amateurs come together to record all nature sightings in a given area. The bioblitz at Murphys Point on August 18 will be packed full of discovery/exploration activities for kids and adults alike. There will be a central “lab” area where members of the public can share their sightings. Park interpreters, along with a number of special guest experts, will be on hand to lead the walks and lend out field guides, binoculars, nets, and other equipment. A rare landscape in southern Ontario

Murphys Point Provincial Park sits on the edge of the Frontenac Arch, a bridge of Precambrian rock that links the Canadian Shield to the Adirondack and Appalachian mountains in the U.S. As such, it is home to an array of wildlife that is rarely found elsewhere in southern Ontario. Because of this, we’d love to get a better understanding of which species live in the park.

The benefits of citizen science

This is where the concept of a bioblitz really kicks in. It’s a citizen science method of bringing members of the public (expert, casual, and everyone in between) together for a day of discovery. Every species spotted by participants counts, from the smallest of insects to the largest of trees. Last year, during the inaugural bioblitz, visitors discovered over 750 species in a single weekend — an incredible 240 of them being new to the park list. Using free citizen science tools such as iNaturalist, a good proportion of those species were photographed and made permanently available for public viewing. Mark Read, Park Naturalist at Murphys Point, suggests that “using iNaturalist is a great way to not only share observations but also a fantastic tool for learning more about the wildlife on your very doorstep. With experts ‘at the other end’ (of iNaturalist) helping make identifications, recording the species found in your own backyard, local conservation area or provincial park, is in its own way, your very own bioblitz.”

With many bioblitzes typically taking place in June, Murphys Point is trying something different. The later date (August 18) will showcase a number of flowering plants and insects that are not typically seen earlier in the year. It will also provide a better opportunity for families to get involved, with summer holidays in full swing.

We hope you can join us!

Whether popping in for the day, or making a longer stay out of your visit, don’t forget to get down to the main beach to check out how things are going. Who knows, you may even find something new for the park!