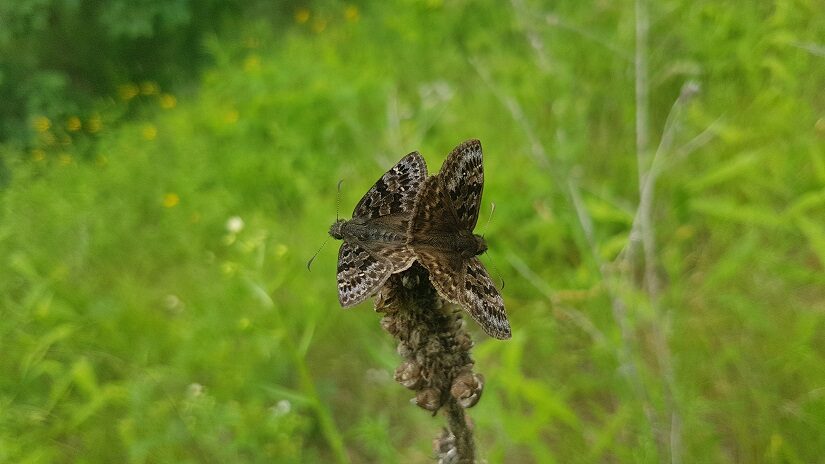 A missing piece of Pinery Provincial Park’s biodiversity has recently been replaced!

After a long absence, the Mottled Duskywing butterfly (Erynnis martialis) is once again taking wing in one of Ontario’s busiest parks.

This is the story of how a small butterfly was lost and brought home again.

In this habitat, there are scattered trees (mostly fire-resistant oaks) with plenty of space between them so the sun can reach smaller plants. This sunny openness allows for many wildflowers to grow. Oak savannas were (and in many places still are) created and maintained by Indigenous peoples’ use of fire. This type of land management creates incredible biodiversity, particularly for butterflies.

When Pinery was added to the park system in 1957, the sparse trees were thought to indicate an unhealthy forest. Millions of pines were planted to fill in the forest “gaps.”

Fire was rigorously suppressed. The White-tailed Deer population increased dramatically, as nearby settlers created conditions in which they thrived.

As the park’s tree canopy closed in and deer ate nearly every plant they could reach, life became harder for many species.

By the late 1980s, ecologists and park managers were beginning to understand that oak savannas were rare and valuable habitat.

But for many species it was too late.

The Mottled Duskywing is now listed as Endangered in Ontario, while the others have completely disappeared from the province, and are considered extirpated.

Since then, staff at Pinery have put countless hours into oak savanna restoration projects.

Pinery staff have partnered with Kettle and Stony Point First Nation to manage the deer population. A prescribed burn program helps to keep the tree canopy open. Seeds of key wildflower species were spread to increase their populations, and invasive species are continually removed.

But no amount of habitat restoration would return the missing butterflies.

Bring in the butterfly superheroes

Mottled Duskywing butterflies still lived in a few small pockets of habitat in Ontario, but they are far from Pinery.

Before settlement, southern Ontario had enough savanna habitats that small insects could spread on their own.

Today, our roads, agricultural fields, and mowed lawns have created impassible barriers for many species.

To bring the Mottled Duskywings back, humans would need to lend them a hand.

The Ontario Butterfly Species at Risk Recovery Team was created for this very purpose.

After years of preparation, the team released just under 700 Mottled Duskywing individuals into the park in 2021.

As the summer of 2021 ended, the recovery team anxiously awaited the return of spring.

If the Mottled Duskywing butterflies survived the winter to emerge and reproduce in 2022, there would be a good chance that the species could hang on for the long term.

Will our butterflies survive?

Finally, some early results submitted to iNaturalist in May 2022 were confirmed: the butterflies had survived!

The recovery team’s work is not over. Researchers are taking this unique opportunity to study how long the butterflies survive, how they respond to land management activities, and how far and how fast they disperse from the release site.

The knowledge that the recovery team gains from Pinery’s newly released butterflies will be applied as they return Mottled Duskywings to several other planned sites.

If all goes well, this species will be much more secure in Ontario, and eventually may no longer be considered endangered.

It’s not just the butterflies that benefit from this work.

Birds, snakes, plants, and other insects will also use Pinery’s restored habitats.

And eventually, we may have the chance to return all three lost butterfly species to their rightful place in the park.

Credit and our sincere gratitude to A. Demarse for this post’s beautiful header image.