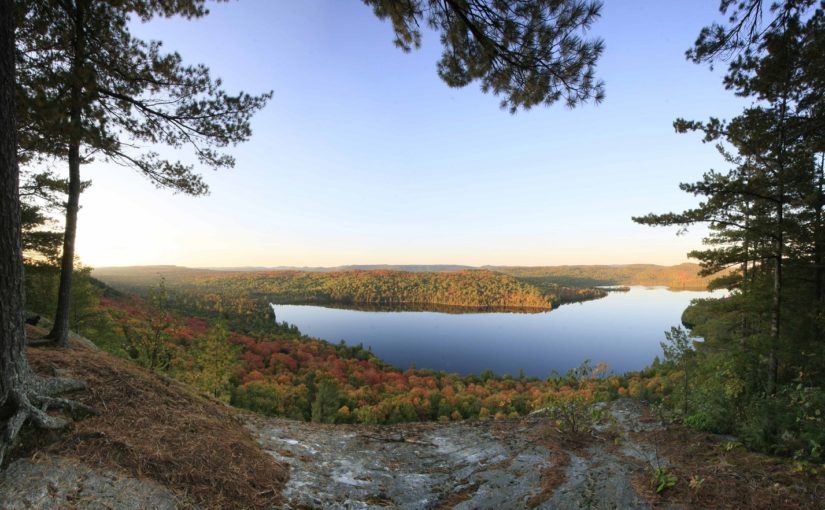 If you have been to Mississagi Provincial Park, you’ll know that it’s one of Ontario’s best-kept secrets. The scenery is spectacular, thanks to the geology of the area, which forms a series of hills, ridges and cliffs, and valleys with sparkling blue lakes.

Covering the hills and surrounding the lakes are the forests of the Great Lakes-St. Lawrence Region. Sugar maples, red maples and yellow birch make up most of the trees in the forest, but white pine and black spruce find places along the rocky ridges and lake shores. These forests light up in the fall with red, yellow, gold and orange.

Located above Lake Huron, just east of Sault Ste Marie, this rugged landscape of hills, ridges, cliffs and sparkling lakes is ideal for hiking and Mississagi has over 40 km of trails to explore. Most of the trails in the system are connected, and can be hiked as individual day hikes or hiked together for a backcountry trip of several days.

The McKenzie Trail (22 km from the campground, 2 days, difficult) is the longest and outermost loop of the trail network.  The trail is named for Bill McKenzie, an RCAF pilot who made an emergency landing into Helenbar Lake in 1946.  He was flying a Gloucester Meteor, the first Allied jet fighter of World War II, on loan from the British.  Caught in a storm and low on fuel, he was forced to ditch the plane in Helenbar Lake.  His survival gear went down in the plane, and he survived on the shore of the lake with little food.  There were no roads in the Algonquin Park-sized Mississagi Forest Reserve, as it was called at that time, so rescue was not guaranteed.  Rescue did final come after 26 days, when McKenzie heard the outboard motor of a fisherman trolling on Semiwite Lake.  The Royal Canadian Air Force later recovered the jet from the bottom of the lake. The McKenzie Trail goes through a variety of landscapes, but the highlight of the trail is the easternmost section which has a series of lookouts over the vast Stag Lake Peatlands, a provincially significant wetland at the east end of the park.  More lookout opportunities follow as the trail hugs the cliff-top edge of a small box canyon.  Perhaps the best lookout in the park is from a rocky outcrop that overlooks the Brush Lakes with the Peatland off in the distance.  Two backcountry campsites are found on the Brush Lakes, and another on the north side of Helenbar Lake.  The trail is rugged and scenic, so a two-day hike is a quick trip, three days allows for a bit of exploring, and a more leisurely four starts to create that immersive feeling of wilderness.

The Semiwite Lake Trail (12 km, 6 hours, difficult) circles Semiwite Lake, beginning and ending at the campground. While the elevations are never high, the trail goes up and down as it winds around the lake. There are lots of great views, and a couple of good swimming spots to cool off during the trek. Two of the park’s five interior campsites are found along this trail and two other trails link to the Semiwite to form the park’s backcountry hiking opportunity. The trail continues on, and peaks (literally) at the breath-taking Helenbar Lookout. The lookout sits atop one of those north-facing ridges, with views across Helenbar Lake far below and the Boland River Valley in the distance.  This is an obvious rest stop and photo op.  The trail moves on, heading down the slope again eventually passing through a stand of huge old growth eastern hemlock before rejoining the Semiwite Lake Trail. Other trails in the park include the Jimchrist Trail (11 km, 6 hours, difficult), which explores the forests, wetlands and lakes below the Helenbar Lookout; the short Semiwite Creek Trail (1.2 km, 30 minutes, easy); and the Flack Lake Nature Trail (0.8 km, 30 minutes, easy). The park’s famous Mackenzie Trail is currently closed for maintenance. Another good trail is found just up the road in the Rawhide Lake Conservation Reserve – the Cobre Lake Trail (11km, 6 hours, difficult) weaves its way around lakes, through tall Red Pine stands and up to another ridge-top lookout.  A trail at the end of Flack Lake, accessible only by water, takes hikers to the top of Mount Baldy, which has extensive views across the park.

Any time is good, as the seasons are continually making visual changes to the park, and there are never any crowds. Early summer is great for birding, as nesting warblers and other forest birds are everywhere and calling throughout their territories. In summer, Pink Lady’s Slipper (Moccasin Flower) blooms, and in late June and July, bunchberry carpet the forest floor in white flowers. Autumn might be the best time, as the fall colours are as good as any place in Ontario, especially from the many park lookouts.

Absolutely. Car camping is available from late May to early October, and the 60 campsites in this wooded campground are secluded and private.

The lakes in Mississagi Provincial Park offer backcountry camping opportunities. There are two sites on Flack Lake, one on Helenbar Lake and two on Semiwite Lake. If you don’t have your own canoe you can rent one at the park.

The road up to Mississagi from Highway 17 runs right through the City of Elliot Lake, which has all the services hikers and campers need. Elliot Lake has a great vantage at the Fire Tower Lookout and Heritage Centre – Lake Huron and Killarney can be seen in the distance. The Deer Trail driving route circles up through Mississagi and down the Little White River Valley, providing a great scenic drive or an energetic cycling route.

Ready to book a trip?