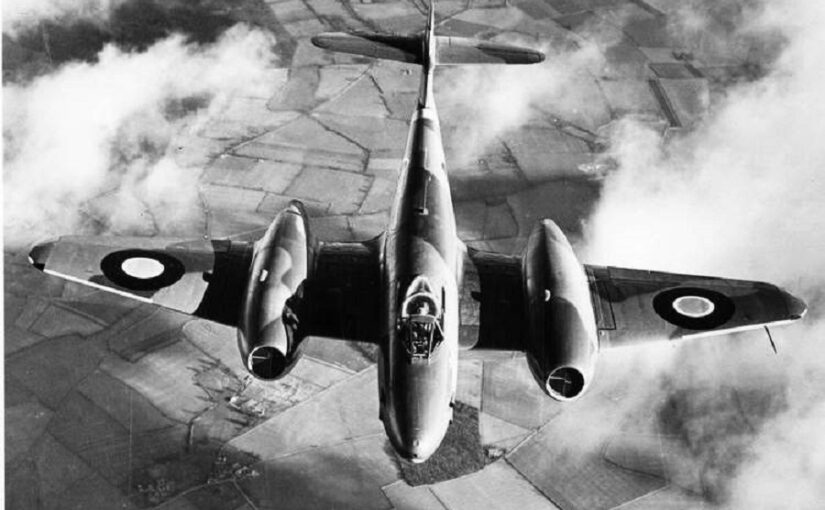 On June 29, 1946, a Meteor struck the waters of Helenbar Lake in the remote forests 60 km north of the town of Blind River…

… but it wasn’t the kind of Meteor you’re thinking of.

This Meteor was a jet fighter plane!

The Gloster Meteor was the first allied jet of WWII, seeing combat in July of 1944.

The two-engine jet fighter was meant to counter German jet fighters being developed during the same period.

At first underpowered by early jet engines, the aircraft was eventually able to reach speeds of more than 500 miles/hour, setting records at the time.

Flying Officer William “Hugh” McKenzie was our pilot. Hugh had previously demonstrated his prowess by flying Spitfires, a very fast and maneuverable plane.

He was then chosen to fly in the first Meteor squadron, chasing and shooting down the V1 “flying bomb,” a type of rocket-powered missile aimed at England in the late stages of the war.

McKenzie shot down his first V1 as he dropped 2000 feet to come in behind the rocket. Heading for populated London, the rocket exploded in a field.

In 1946, McKenzie was in the cockpit of EE311 (the Gloster Meteor), flying somewhere over northern Ontario on its way to an air show.

The jet had been loaned to the Royal Canadian Air Force by the Royal Air Force for cold weather trials in Alberta.

The flight from Edmonton to Hamilton was a long one, but he was up for the task. The jet had been shipped by train to Edmonton and reassembled for flight tests.

The aircraft had two long-range fuel tanks at the end of each wing, with another tank under the belly of the plane to extend its range for McKenzie’s long trip. However, well into the flight McKenzie became caught in a storm, and noticed that the Meteor was low on fuel.

That’s when he knew that the extra fuel tank had failed.

With nothing but forest below him, McKenzie was forced to ditch the plane in Helenbar Lake.

A beautiful lake, now in the heart of Mississagi Provincial Park, Helenbar was a long way from anywhere in 1946. There were no roads nearby, and any town was many kilometres away. The city of Elliot Lake did not yet exist.

His survival gear went down in the plane, and now sat on the bottom of Helenbar Lake.

After a couple of weeks, McKenzie’s Royal Canadian Air Force unit, the Winter Experimental Test Establishment, noted on July 15 in their official diary: “Committee of Adjustment appointed to deal with the effects and affairs of Flight Lieutenant McKenzie.”

Meanwhile on the shores of Helenbar Lake, McKenzie was still alive and struggling to survive, sheltering on the shore of the lake with little food other than the berries that he could find.

There were no roads in the Algonquin Provincial Park-sized Mississagi Forest Reserve (as it was called at that time), so rescue was not guaranteed. McKenzie didn’t even know he had been declared missing and deceased!

Rescue did eventually come after 26 days in the wilderness, when McKenzie heard the sound of an outboard motor of a fisherman trolling on Semiwite Lake.

He crossed the portage from Helenbar to the next lake and was rescued.

Amazingly enough, William McKenzie returned to test flying, and the Royal Canadian Air Force later recovered the jet from the bottom of the lake.

After some repairs, the jet was on display at the Canadian National Exhibition in Toronto — the story goes that the folks at RCAF headquarters told McKenzie to “stay away!”

See this historical site for yourself!

Their 7 km Helenbar Lookout Trail takes hikers through a spectacular lookout to Helenbar Lake and views of the surrounding mountainous landscape.