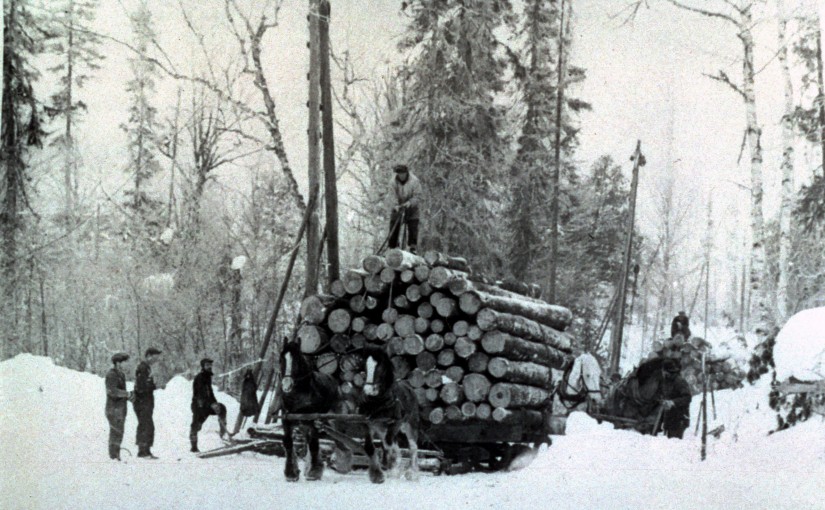 Bert Edmundson and Eugene McIsaac had the same dream more than 50 years ago: to honor the fabled Canadian lumberjacks of yesteryear. Little did they know their dream would one day become a major Ontario Parks attraction!

Marten River Provincial Park lies at the southern edge of the Temagami region, less than an hour from North Bay.  The park straddles the waters of the Marten River, part of a vast network of rivers and lakes that thread through the forests here.  This was once the Temagami Provincial Forest, like Algonquin Park, created to protect stands of towering White and Red Pine forest from fires, and settlers.

In the late 1800s and early 1900s, farmers turned into lumberjacks each winter, living far from home in isolated log cabin villages.  These “winter camps” were temporary, self-sufficient communities of rugged men, whose sole purpose for the snowy months of the year was to “hurl down the pine”.  Towering old growth White Pine was a valuable commodity, but the easy-to-get-to trees in the Ottawa Valley and even in the new Algonquin Park, had mostly been cut.

Timber companies moved into the Temagami area in the late 19th century, using the waterways to access the forest, and drive the logs to them mills once they were cut.  The men of the camps cut down the pine with large axes and long cross-cut saws, and used horses to haul the stacked logs to lakes.  The logs would be left on the lake ice until spring, when the ice would melt, the rivers would roar, and the lumberjacks would drive the timber down to the mills.  Once the timber was at the mill, the men would return to their farms, abandoning the camps, often building new ones the next winter.

Lumberjacks have long captured the imagination of Canadians, and in the 1960s, they captured the imaginations of Bert, Deputy Chief Ranger at Marten River, and Eugene, then a park ranger who had spent years working as a government scaler. They wanted the loggers who had led settlement into the area only a half century before to be recognized.

To begin, Bert and Eugene needed authentic lumbering equipment.  Eugene knew the location of a number of the early camps and Bert was itching to mine whatever the loggers had left behind.  By 1971, they had overseen the construction of a blacksmith shop in the park.

The blacksmith shop was soon filled with original equipment, thanks to a donation by Samuel de Champlain Provincial Park, which had been given the tools years earlier by a now-forgotten camp blacksmith. There was a forge, an anvil, several drill presses, hand-crafted logging chains, wrenches, sockets and more.

At Grassy Lake they discovered a 1941 Otaco horse-drawn snowplow, cast iron pots and pans, and a large assortment of enamel plates, cups, saucers, bowls, tea and coffee pots.  Just northwest of Lower Goose Falls, a disintegrating camp barn held the remains of 28 logging sleighs. Near Goward they came across bits and pieces of a horse-drawn water tanker and, down Lowell Lake Road just south of Temagami, they found more tanker parts – enough to rebuild a complete water tanker. Not much farther down the road they discovered the iron parts needed to reconstruct a jammer (a crane mounted atop a sleigh, used to load logs onto horse-drawn logging sleighs).

Bert and Eugene were pleased to see the blacksmith shop and several large pieces of logging equipment become such as hit. What could be better? That’s when the idea of an entire Winter Camp was born.

Adjacent to the Winter Camp is the logging museum and theatre, filled with artifacts that have been donated through the years by people whose fathers, grandfathers, or great-grandfathers had been lumberjacks.

Both Bert and Eugene would have been amazed to see the quality and quantity of logging artifacts that people have donated over the last 45 years, making this exhibit one of the richest collections in Canada of early logging equipment and documents.

The record of donors is long, but not nearly as long as the number of logging artifacts they have so graciously given:

In 2013, the family of the late David Raymond Stewart bequeathed the largest donation the park has yet to receive.  Mr. Stewart had been the paymaster, and later accountant, for George Gordon & Co. Ltd., a large Cache Bay, ON, sawmill employing dozens of logging camps in the Sturgeon River watershed between 1900 and its closure in 1965. His passion for both logging and parks led to his gift of more than 100 pieces of logging tools and 300 original documents including river driver contracts, cutting agreements, timber licenses, time sheets, maps, etc.

You can almost hear the shouts of “TIMBERRRR” as you walk through the camp today.