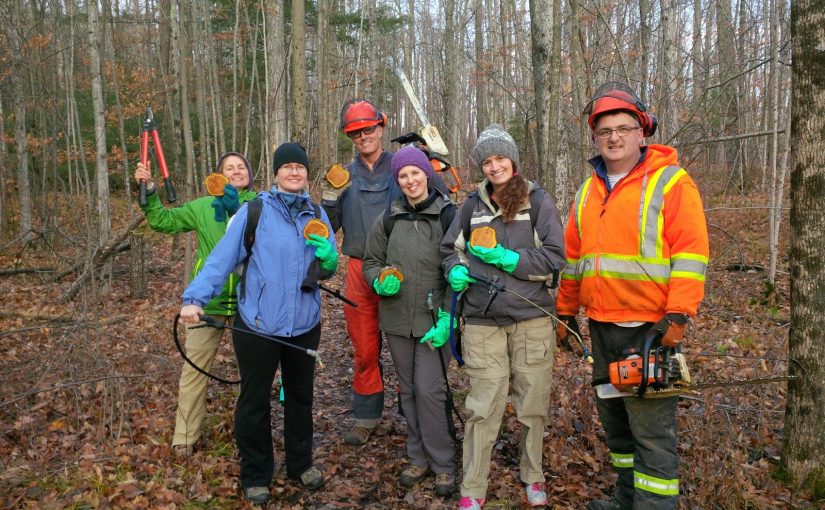 If you’ve visited Mark S. Burnham Provincial Park lately you might have noticed many freshly cut small stumps. This is the result of a recent blitz to remove an alien invasive species — European buckthorn — from the park.

Although small, Mark S. Burnham is home to old-growth forest and has some hidden treasures. One of these is the world’s oldest known living sugar maple tree: it’s over 330 years old!  This survivor sprouted from a maple key more than a century before Europeans moved into this part of Ontario.

When this maple key sprouted the surrounding area would have looked completely different. Some of the species it would have shared the forest with have disappeared, and new ones have arrived.

The forest at Mark S. Burnham has managed to avoid colonization by many of the plants European settlers brought with them – plants that biologists call “aliens.”

Buckthorn is one of these plants.

It was introduced in the 1880s to provide windbreaks in farm fields, or perhaps as an ornamental shrub. Since then, it has spread all across southern Ontario.

Unfortunately, this tough, thorny shrub can form dense thickets that crowd out other native trees and shrubs, reducing biodiversity. It can also change soil chemistry, making it harder to native plants to grow.

It spreads easily because birds love its dark berries (which are slightly toxic to other animals and have a purgative effect). You can often find lines of young buckthorn growing under hydrolines or other places birds like to perch, where the digested fruit and seeds have been “deposited” (often in an obvious purple smear).

Because of its ability to spread easily and take over an area, it’s considered to be an invasive species. Buckthorn is one of the few alien plant species that has gotten a foothold at Mark S. Burnham. Over time, several large, old shrubs have multiplied into hundreds of small shrubs.

It was time to call in Team Alien Invasive! A group of park staff got together for a day this November to remove as much buckthorn as possible, using clippers on small shrubs and chainsaws to fell larger tree-sized buckthorn.

Fall is the best time to tackle buckthorn. Like many invasive species, it has a longer growing season than native plants. By staying green later into the fall, it’s able to collect the last rays of sunlight, making it better able to live through the winter and produce flowers and fruit the next year.

We treated the cut stumps with an approved herbicide that stops the stump from sending up suckers. Suckering is similar to the mythical Hydra: the plant sends up many small shoots from the cut branch to replace the one that was lost.

Next summer, we will return to the site to get rid of any surviving buckthorn suckers.

We’re very curious to see what grows in its place. It may take a few years, but we hope to see young maples, beech, and other native trees growing in the buckthorn’s place. Keep an eye out for buckthorn in your travels.

If you see this invasive in a park, let a staff member know and/or report your sighting online.