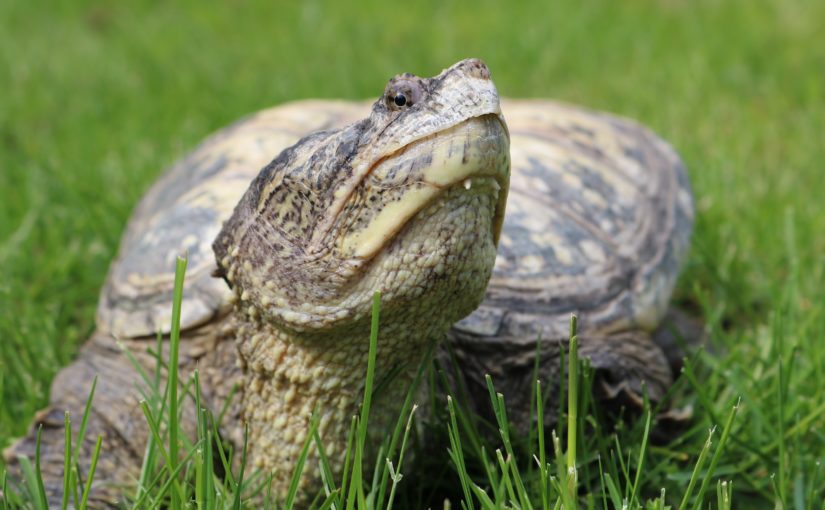 In our “Behind the Scenes” series, Discovery Program staff across the province share a backstage glimpse of their favourite programs and projects. Today’s post comes from Rosemary Minns from Emily Provincial Park.

Emily Provincial Park is a lovely place. Plenty of docks to fish, beaches to swim, and large campsites. I was extremely excited to work as a Discovery student at Emily. There was one catch to this job…

…I had to learn to take care of a Snapping Turtle.

This being my third year as a Discovery student at Ontario Parks, I have become accustomed to a lot of different wild species, but I can say that at the beginning of this year, I was not particularly thrilled about taking care of a Snapping Turtle.

Now, I’m sure you’re all thinking that, in Ontario, it’s illegal to keep wild animals as pets.

So why does a provincial park have a Snapping Turtle?

Spike, unfortunately, was taken from the wild when he was about the size of a toonie (probably his first year out of the egg). Someone spotted him and decided to keep him as a pet.

He was kept as a pet for about four years.

During this time, Spike became accustomed to the human world. He was fed by his owners, and he didn’t have any predators in his tank.

Because of this, if Spike were to be released back into the wild, he wouldn’t be able to fend for himself. When the conservation officer found him, he needed to go to a forever home. Somewhere that could take care of him for the rest of his days. So we decided that we’d love to have him here at Emily! That was a few years ago now, and he’s been a fantastic addition to the park family.

It didn’t take long for this little reptile to find a soft spot in my heart. In my first week at Emily, I was tasked with feeding Spike.

My supervisor took me through the steps of feeding him. Ten mealworms and some veggies on Mondays and Wednesdays (whether he wants to eat his greens or not!), and five large mice on Fridays, all to ensure he gets a balanced diet.

“Always remember to get his attention before dropping the food in the water or else he won’t go after it,” he explained. “Oh, and if Spike bites the tongs by accident, give him a minute, he will realize he can’t eat them and let go.”

I watched, took notes, and then it was my turn.

As Spike chomped down on the worm, swallowing it whole, I knew this was going to be a great friendship.

Feeding him became a fun little task every week, and it was time that I got to spend growing our friendship. It may have just been food to him, but to me, it was so much more.

He has a lovely enclosure inside and outside of the park office. The indoor tank got a whole new snazzy filtering system, which he loves so very much! (He may have played with and broken the old one.) This is where he spends his time at night, in the winters, and when we are feeding him. It has a tank full of water for him to swim in and a heat lamp for him to lay under when he gets cold.

At the beginning of the summer, it was looking a little dingy. The winter had taken its toll and shifted the rocks, collapsing the pond. So the Discovery staff went to work in revamping Spike’s summer home. We started by digging around the pool, so that we were able to pull it out. We gave it a good scrub down, so it was nice and clean. Then we had to dig down deep so that the pool would fit back in. We filled in the area around it back in with rocks and dirt, and finally, we filled it up with clean, fresh water.

Just like that, the outdoor enclosure was ready for a happy turtle! Spike has become something of a star at Emily, and I’m his assistant.

He plays a vital role in educating visitors on the importance of turtles in our waterways, and teaches others how to safely move turtles across the road during nesting season.

Every June, we host school groups from around Durham and the Kawarthas, and they are given a chance to go fishing, play games, and have a very special turtle talk with Spike and the staff.

Throughout July and August, you can catch Spike every Saturday at our Park Store in front of a crowd of campers.

Spike whispers in my ears, and I then inform the campers of what he said. I talk about the importance of turtles in Ontario while Spike captures their love with his brilliant presence.

Why we love Spike

When Spike and I are standing in front of a large crowd of campers, smiles wide, I get a sense of joy that they are learning and understanding that these creatures are not a threat to us. That we need to help them as much as we can to ensure their safety. Every turtle talk that I do with Spike ends in a demonstration of how we can help turtles cross the treacherous roads ahead of them. I outline the details about how the numbers of turtles in Ontario are decreasing and how they need our help to stay alive. Campers leave with a responsibility to help the turtles around them, and to inform others to do the same.

Although Spike was unrightfully taken from the wild, his journey helps the staff and campers at Emily be more aware of the environment around them, and to support it as much as they can.

Spike holds the hearts of many campers and staff, and he is and forever will be an essential member of the Emily Provincial Park family.

If you ever spot a turtle laying eggs, let a staff member know! Many parks have turtle nesting protection programs to keep predators like skunks and raccoons away from the site.

You can also document your sightings using the iNaturalist app to help us learn more about their movement within the park!