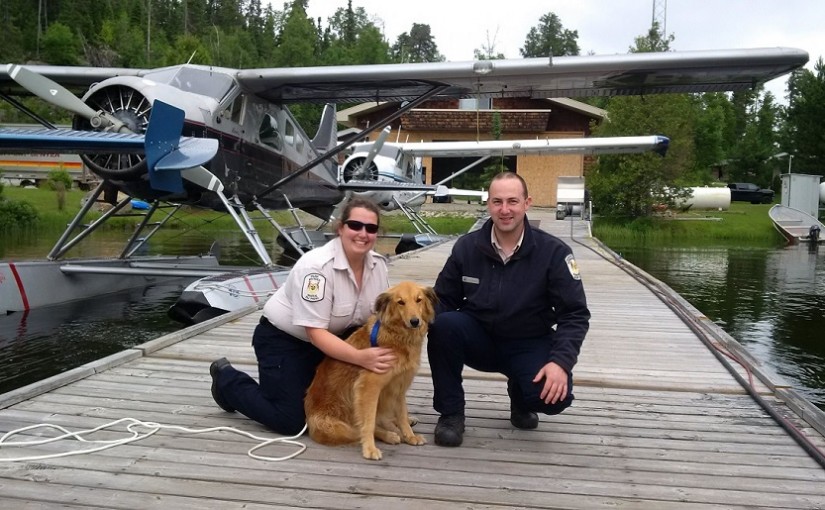 Quetico Provincial Park is a world-famous destination for backcountry canoeing, with over 2,000 lakes and 460,000 ha of remote wilderness. You can explore the heart of the park for two days or two weeks.

So when a beloved dog disappeared, the Kareken family searched for two days before finally assuming the worst and returning home — devastated — to North Carolina.

Over approximately 10 days — the outfitter explained — several of their guests had exited the park and reported hearing a dog barking, or spotting a dog  in the McAree and Crooked Lake area. Just an hour after reporting the dog to park staff, another guest of the outfitter called to say he had coaxed the dog to his campsite on Lac La Croix Lake.

The dog was obviously timid and hungry, and its adventures weren’t quite over — there was still a long way to go. The camper managed to bring the dog to the outfitter’s resort and, in turn, arrangements were made to take it to the Lac La Croix Ranger Station.

A park supply run (park staff travel by float plane to each of the remote Ranger Stations once per week) was scheduled that day, so plans were made to bring the dog back to Park Headquarters in Atikokan.

The dog was exhausted, but otherwise seemed to be in good health. The dog, a retriever mix, was well cared for by the Pfeifer family in Atikokan.

Meanwhile, our park officials spent the weekend scouring social media and contacting US Forest Service colleagues. Surely someone must have heard of a missing dog.

But no reports were found.

As a final effort on July 18, an email was sent to all Canadian and US outfitters in the Quetico area to see if they’d heard of anyone reporting a missing dog. Within 20 minutes of the email being sent, an Ely, MN outfitter contacted Quetico staff, exclaiming: “I think I know who owns the dog!”

Within another 20 minutes, park staff had the pup’s owners on the phone — this pup was going home!

It turned out this beloved family pet had been missing since July 4. She’d slipped into the water near Rebecca Falls and gone over the waterfall.

Devastated, they spent the next two days in the area searching, but with no success, they assumed the dog had drowned and returned home to North Carolina to grieve.

So when park staff called to let them know Kali had survived a ten-day wilderness ordeal, they were overjoyed, immediately starting the long drive back to Quetico!

Huge thanks and congratulations to all the park staff, outfitters, campers and other caring individuals who helped us get Kali home!