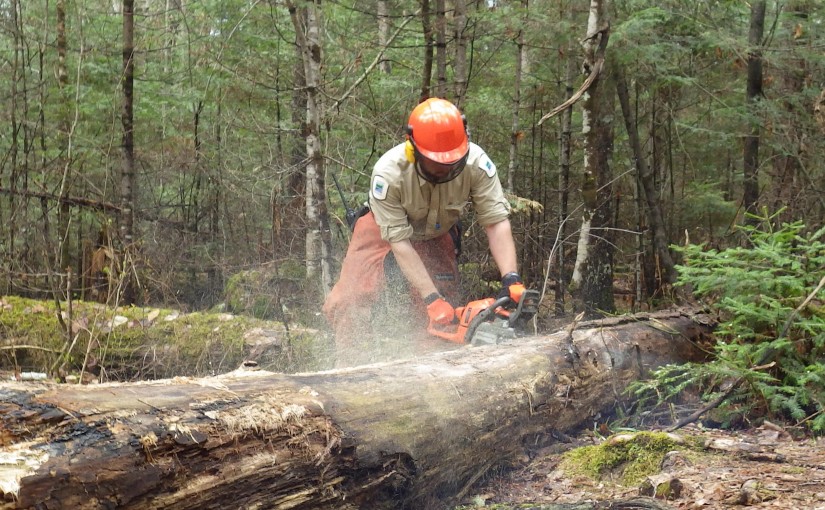 Here’s what her team was up to in May and June:

For our first day, we began with a small portion of the Highland Backpacking Trail. Our job for the day involved removing fallen trees and smaller debris from the trail. As we near the end of our section, a path breaks away indicating a 250m hike to the Starling Lake Lookout.

The next day, I was able to experience a once-in-a-lifetime opportunity: helicopter stocking! Resource Technicians in the park are involved in stocking lakes with fish to allow for angling opportunities. The fish arrive from the hatchery in North Bay, where the order had been placed three years in advance to allow for the fish to mature. The fish stocking occurs when the water is still cold to minimize the stress on the fish and maximize the survival rate. The isolated backcountry lakes are inaccessible by road, so the stocking must be done by helicopter.

Along with three other students, I had the opportunity to help with this project, loading the fish into the helicopter and releasing them into the lakes. As the pilot hovered over the lake, it was our job to pull the cord, releasing the Splake (a non-reproducing genetic hybrid of Lake Trout and Brook Trout) into the water.

The next morning, I went out on Lake Opeongo to maintain some sites. When we arrive at a site, we take out a rake, shovel, and garbage bag. We dig out the fire pit, collect any garbage that has been left behind, and dig a new hole for the privy if necessary. We finished off the lake, completing a portion of the Western Uplands Trail, clearing dead fall and maintaining sites on Guskewau Lake. When we arrived, a new privy hole had to be dug due to the garbage that was found stuffed inside. On the last half of the hike, we cut more deadfall to make the trail much easier to cross.

To begin the week, we cut the last 4.2 km of the Provoking loop on the Highland Trail. We began by canoeing across the lake to the junction that meets with the second loop. The trail had moderate deadfall, which we cleared to make passage easier.

For the rest of the week, we cleared a few portages, including the trail from Groundhog Lake to Potter Lake and Maybe Pond to Potter Creek. The next day, we were flown into Maple Leaf Lake to clear the hiking trail and maintain the sites. We made a bench from a dead pine, providing a spot around the fire for campers to use.

Once we were finished with the sites, the plane arrived to bring us back to Smoke Lake. Algonquin seems to stretch on forever. What a great way to end the work week!

On Monday morning, we flew into Redwing Lake to maintain the sites and clear the trail to Ramona Lake. We maintained the sites on Redwing, Lupus, and Thunder Lake. As we were clearing a fallen tree, we discovered the nest of a bird which we were careful not to disturb.

Later in the week, we flew to Harness Lake to complete a section of the Highland Backpacking Trail. We hiked the 8.1 km trail to Provoking Lake. As a part of the Algonquin Leadership Initiative here in the park, staff who wish to experience different aspects of the park are able to volunteer with different program areas. One of the permit staff working at the East Gate was able to help us that day. Together we were able to complete the last of the cutting for the Highland trail. It is now ready for the backpackers of Algonquin Park!

This week, we continued to clear the Western Uplands hiking trail. We cut the trail to Brown Lake, and maintained the sites. The next day we were flown into Pincher Lake to clear the 9.2 km trail to Islet Lake. It was a great lake with some beautiful rocky sights.

The next few days involved the maintenance of campsites. I was able to go out with a different crew for the day, meaning that I was able to experience a new location within the park. We maintained the sites on the Crotch Lake system in the east end, beginning with the Shall Lake access point. This lake has many beautiful beach sites, as well as a cabin that is available for booking. It was great to see a different side of the park!

The next day we went to Provoking Lake to maintain sites. This lake has many beautiful rocky sites and sees a large amount of traffic. As one of the busier lakes, there was quite a bit of garbage to pick up. This also meant that we had to dig new privy holes. Now the lake is ready for the summer season!

To finish off the week, we flew into Clara Lake and walked the 9.4 km trail to Maggie Lake. The day was rainy and the mosquitoes were fierce, but the trail was beautiful. We arrived at Maggie Lake, the pouring rain soaking us completely. Luckily the plane wasn’t far behind! The flight home was something I had never experienced; the rain had made the landscape even more spectacular. Another great week in Algonquin Park!