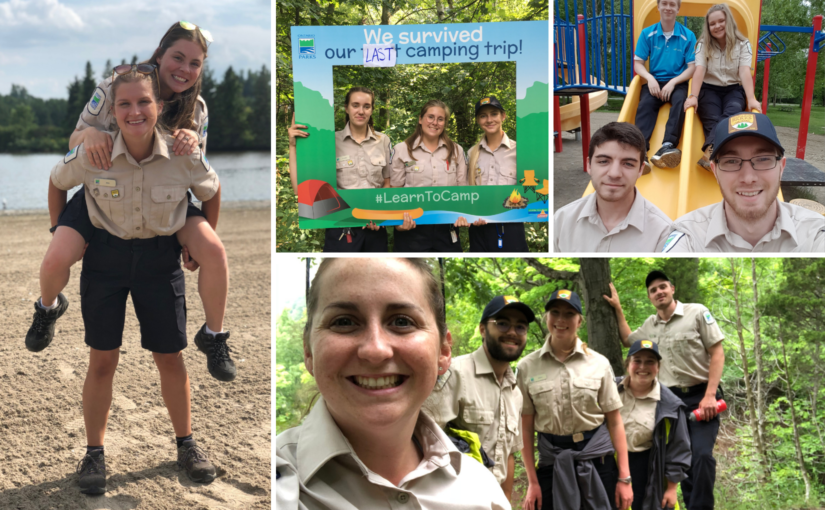 We’ve been celebrating the 125th anniversary of Ontario Parks all year, but did you know one of our signature programs celebrated a smaller anniversary and success?

Learn to Camp is only eight years old, but this season was a big one, marking our 20,000th milestone. That’s right: since the program began, we’ve introduced more than 20,000 people to the joys of camping!

The program has grown from three parks to seven, and it now takes a small but mighty team of 30 staff and summer students to run everything smoothly.

We are immensely proud of our team, as they are the heart behind the program. After a summer of spending their weekends with new campers, building bonds, and sharing their passion for the outdoors, our leaders shared their favourite moments from the 2018 season.

Here’s what they had to say: My favourite moment this summer was from one of our first weeks! Only one family came to our guided hike, but it turned out to be my favourite moment of the summer because their daughter (who had been very shy and nervous about camping and interacting with us) started to come out of her shell and enjoy her camping experience!

She seemed very engaged with everything we pointed out on the trail, and her mom told us that this was the farthest she had ever hiked without help! They were able to get some amazing pictures which they posted to social media, and enthusiastically told us that after having such an amazing time, they would be recommending the Learn to Camp Program to all their friends! Though they had very little previous camping experience (and despite the fact that it was one of the worst weeks, mosquito-wise!) it was clear that this family had turned into lifelong campers. My favourite LTC moment was one week after we presented the graduate session, a camper asked us for some rope and a tarp to try tarping on their own. They were having some trouble with knots so I went over to help and it was so nice to see campers wanting to learn more! These campers even ended up staying in the park for three additional days with their friends after the LTC program ended. My favourite LTC moment happened on a Sunday after the “Planning your next trip” session. Two sites that knew each other asked me a lot of questions about going camping again. They were quite interested in purchasing or renting a trailer since sleeping in a tent wasn’t for them.

They had quite a few questions so we chatted for a while about renting vs. buying, storage options, RV and trailer shows, and companies that have showrooms so you can actually see pop-up trailers set up. It made me so excited that the Learn to Camp program helped these sites learn that tents weren’t for them and thus inspired them to become trailer campers! For all of us who have been camping, the lure of the campfire brings the promise of s’mores, great stories, and bonding time with our loved ones. For our campers, however, a campfire is something that most of them have never experienced before.

During the program, we ran a campfire Saturday nights, so campers could gather and get to know each other (and us!) on a more personal level. It was an incredible experience to watch our campers’ bond with each other and create lasting memories. One weekend that really stands out to us is when we witnessed three mothers connecting over raising young children. Near the end of the campfire, the three exchanged numbers to keep in contact after the weekend was over. All in all, it was a wonderful chance to spread the magic of the campfire to others. This was our first summer working for Ontario Parks and we loved introducing people to the world of camping and all that Ontario Parks has to offer!

One of our favourite moments was having a birthday party for a camper who was turning six. When his mom let us know it was his birthday we quickly made a card, blew up some balloons, and planned to sing during our campfire session. This was our second year teaching Learn to Camp, so we were able to build off the skills we learned last year and incorporate new ideas.

Throughout the park, we had a great sense of community within each department and everyone was always there to lend a helping hand. Every day was a new opportunity and excitement.

One of our favourite memories from the summer was having a campfire with our participants at the end of a long day of learning. It was nice to relax, share stories and experiences, and bond while making some yummy treats! One of our favorite memories from this summer was having a lot of participants from last year come back to the park either in the graduate program or on their own!

We had one weekend where one of our graduate groups was a family from last summer, and while they were in the program they told us their friends were camping in the park as well (three sites of them!) all from the program last year.

Another graduate family that returned even brought their stuffed animals from last year (they’d named them Nick and Will after the 2017 LTC leaders)!

Having these families come back a second time and stop by to tell us their camping stories from personal trips after the program just goes to show how helpful the Learn to Camp program really is, and how much people enjoy it.

Another fun memory from this summer was when we were instructing the campfire session and a little girl asked us for halal marshmallows. It’s awesome to see that camping is becoming more of a hobby for Canadians from all backgrounds! One of my favourite moments from this season was meeting a family at a Learn to Fish session that had done Learn to Camp a few years ago and now make camping a part of their annual summer vacations. It was so nice to see that people were leaving the program confident in their camping skills.

My favourite part about this summer was coming into work every day at a park that I have so many good memories of from when I was a child. I loved being able to share those memories with our participants and watch them make their own memories the same way I did — that was very special to me. The best part of this summer was my wonderful Learn to Camp team. We became an excellent trio that worked effectively together, which reflected in our programming. We had lots of fun, and it made our campers have fun too! We made many memories with our awesome campers and each other. For the returning staff this year, our favourite part of the season was running into previous program participants. Some participants from last year stopped by base camp this season and caught us up on all the camping trips they have been able to go on since taking the program. It was a great feeling to know that we gave them all the skills they needed to feel comfortable to go camping on their own!

For the new staff, our favourite part of joining the Learn to Camp program this season was seeing just how excited all of the first-time campers are. They arrive very eager to learn about the environment and how to camp properly.

Having camped our entire lives, it is really amazing to see so much interest in the Learn to Camp program because camping is really fun and everyone should get to experience a relaxing weekend away from all of the hustle and bustle at least once! Our special moment at Bronte Creek happened during a July weekend session, in which four groups of campers had registered to stay a second night. Despite weather forecasts to the contrary (no rain was forecasted that weekend), we woke up Sunday morning to a torrential downpour of the monsoon variety!

After completing the final session of the program, which involved packing up our tent and shelter in a deluge that seemed to come straight from Niagara Falls itself, we got to work visiting our remaining groups who had scrambled back to their sites. One group, consisting of a father and his two sons, had woken early Sunday morning when their tent and mattresses received an especially large incursion of water, putting their plans to stay a second night in question. The father of the two children explained that he had attended a Learn to Camp program at another Ontario Park during the previous summer, during which one of his sons fell ill, and missed out on the experience as a result.

Despite the momentously adverse conditions, the kids remained optimistic, and pleaded enthusiastically with their Dad to agree to stay a second night. At this point our duty as leaders was obvious, and it involved fortifying the site  for a second night of camping regardless of rain!

After installing a large tarp over a portion of the family’s site and swapping out wet mattresses, in what was a persistent and intense rainstorm, we left our two remaining groups of campers to ride out the rest of the event. We returned the following morning, and found that the kids from our father-son trio, and two young boys from our second remaining site had bonded, and begun enthusiastically seeking out answers to the LTC scavenger hunt. Both camps seemed glad to have stayed a second night, and reported no additional problems regarding weather or camping gear. One group also notified us of their intentions to attend our Grad Program that same summer, if at all possible.

This moment, as well as the entire weekend and program registered with us in an overwhelming and genuine way. It is moments like this that have made this summer as LTC leaders, teaching the LTC program, and our time at Bronte Creek Provincial Park special in a way that simply cannot be put into words.

Thank you to all our wonderful Learn to Camp leaders, and congratulations to all our 2018 participants — welcome to the camping community!