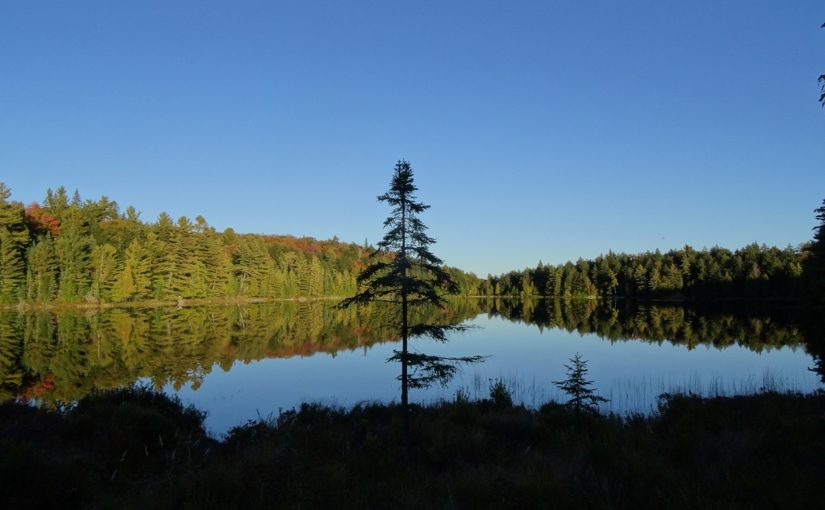 One look at a map of Algonquin and you can’t help but be fascinated by all of the names of the some 2,000 lakes.

First Nations, French and English languages appear, sometimes in close proximity (as is the case of Maple Lake and Erables Lake).

Names that are descriptive of the lake itself (Square Lake, Spectacle Lake) share the map with the names of people (Tom Thomson, Booth, Dickson).

Some lakes remain unnamed even today, still shrouded in mystery. But as for the lakes that do have names, here are some of the stories behind them:

Being right beside Wenina (maiden) Lake, some might imagine there was some tragic event deep in the Algonquin backcountry that involved a lovely lady and a nefarious character. But, no drama here: Bandit was simply a park nickname for an interior ranger who cleared portages and campsites.

Originally known as Cranberry Lake (after the cranberry marsh at the south end), this lake was eventually renamed after Canisbay Township (where it’s located).

The Coralroot is a type of orchid (Coral-lorhiza) common in Algonquin. This orchid lacks both leaves and chlorophyll, getting its energy from the forest floor through a special fungus which lives in association with its coral shaped roots.

Found Lake was “discovered” by Mark Robinson, a park ranger who was surprised a lake so close to the park headquarters was not shown on a map.

He originally called it Lost Lake. In 1936, the lake was changed to Found Lake.

In the early 1960s, Bob Catton of the Ontario Department of Lands and Forests, while studying wildlife in the area, lost a twenty-five-cent piece in the lake. This led to local usage of the name. In 1965, Lost Coin Lake became the lake’s name officially.

Booth had timber limits over large areas of the Ottawa Valley, and built the Ottawa, Armprior and Parry Sound railway through the southern part of the park. One of his main depots, Booth Farm, was located in the hills southeast of the lake.

This lake was named in 1958, in honour of one of the first and most renowned artists to draw inspiration from Algonquin Provincial Park.

The movement to have a lake in Algonquin named after Tom Thomson was started by the Federation of Canadian Artists in 1946.

This lake name honours the Ranger family from which three men (Albert, Peter, and Telesphore) were early park rangers. The name is spoken using the French pronunciation (rawn-zhay).

Actually a good-sized lake, its original name was Moose Lake. The name “Mouse Lake” appeared in the early 1900s, possibly because of an error or because there were already so many Moose Lakes that it was causing confusion.

Next time you are planning your next backcountry canoe trip, driving through the park, or jumping into one of our beautiful lakes, take a moment to think about the vast, often mysterious history behind the lakes in Algonquin.