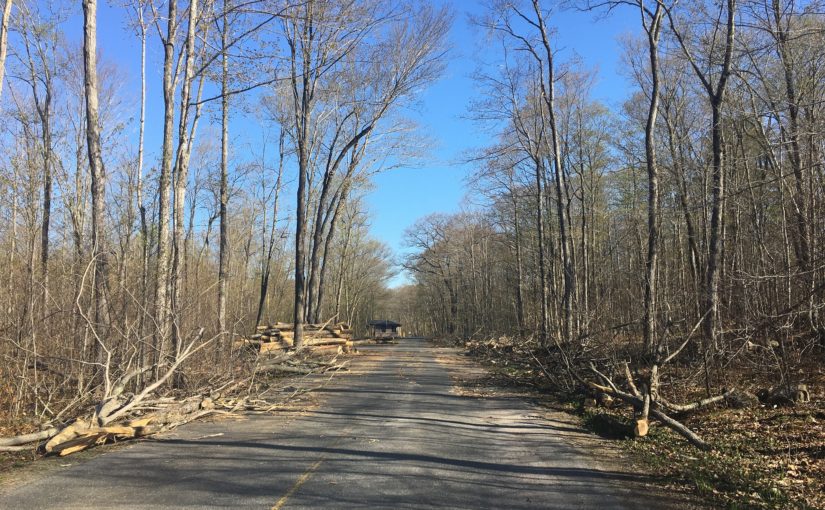 As many faithful Killbear campers will remember, seven years ago our camping landscape changed dramatically with the felling of many American Beech trees due to Beech Bark Disease.

Unfortunately, Killbear has again been infested by an invasive species.

This time, it’s the Emerald Ash Borer (EAB), an invasive beetle that weakens and kills ash trees. Just like that, Killbear’s landscape will be changed once more!

Park staff first discovered evidence of EAB at Killbear in the fall of 2019.

Originating in Asia, this iridescent green beetle has been decimating ash trees across southern Ontario, and marches steadily northward. Eggs are laid, hidden in the bark of an ash tree. When the larvae hatch, they begin eating away at the layer under the bark where nutrients flow up and down the tree.

The larvae grow bigger, while eating more and more until they pupate and eventually emerge from the tree as adult beetles one to two years later. You can occasionally find small “D-shaped” exit holes in the bark where adults emerged.

Underneath the bark layer, squiggly “feeding galleries” can be seen, marking the progress of the larva that grew there.

Ash trees infected with EAB will experience crown dieback, meaning fewer leaves at the ends of their branches. Because these trees are unable to send food and water up to the crown, they will often sprout “epicormic shoots.” These thin, out-of-place branches found along the trunk help the tree continue to collect sunlight and make food despite the infestation.

Woodpecker holes and peeling bark are further signs of EAB.

Preparation for the future

Just as Killbear looked a little different after the cutting for Beech Bark Disease, the cutting that took place this year has changed things again.

Campsites may be a bit sunnier and the forest may look a little thinner. Fortunately, the forest will adapt.

Other tree species will take advantage of the light and space, and grow more quickly, filling in gaps for the future.

In the meantime, the rumble of wood chippers has become an everyday sound, as maintenance crews work hard to get the park ready as soon as possible.

In the end, Killbear will still be the same park you know and love.

Burn where you buy!

Everyone has a part to play in stopping the spread of EAB. What happened at Killbear does not have to happen at other parks and natural areas throughout Ontario.

An individual EAB beetle can only fly a few kilometeres.

The reason why EAB has been able to spread so quickly through Ontario is because of people moving infested firewood to different areas.

Remember to burn your firewood where you buy it! Don’t bring any wood products from other parts of the province to parks.

Together, we can prevent the spread of the Emerald Ash Borer.