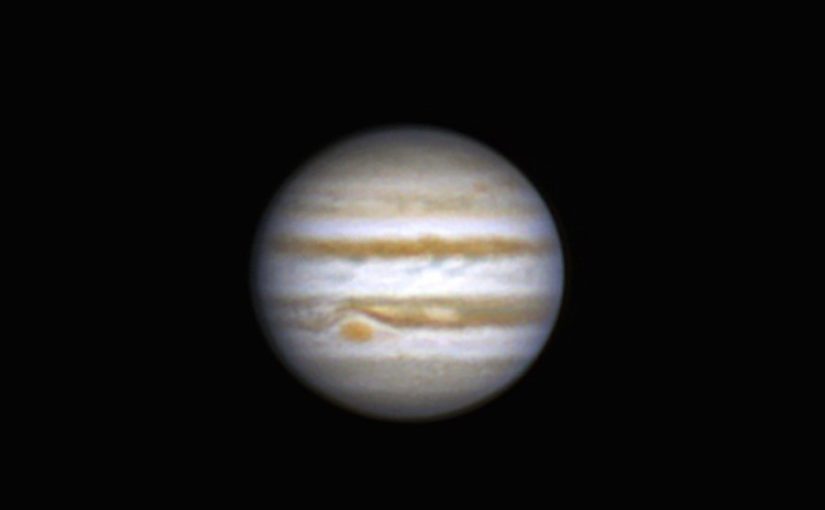 Looking to brush up on your planetary science?

Jupiter is by far the largest planet in our solar system. At just over 140,000 km across, you could actually place all of the other planets combined within Jupiter’s massive bulk. And, if you were to hollow out Jupiter (like a pumpkin), you could fit over 1,000 Earths inside it! Jupiter is the poster child for a class of planets known as “Gas Giant” worlds. These planets share four basic things in common. They are all:

Jupiter, despite its tremendous size and bulk, has the fastest rotation rate. Whereas a day on Earth is 24 hours long, a day is just under 10 hours on Jupiter. This rapid rotation rate, combined with its gaseous composition, causes Jupiter’s atmosphere to form amazing patterns: belts, swirls, eddies and at least one giant red spot that has been seen for over 300 years.

The “Red Spot” (lower left in the above picture) is an intense area of high pressure (like a hurricane in reverse) known as an “anti-cyclonic disturbance.” The Red Spot alone could fit between two or three Earths inside it.

While Jupiter has many satellites, there are four that are especially easy to see and were discovered by Galileo more than 400 years ago; hence known as the Galilean moons.

These moons are tidally locked to Jupiter and orbit around it in just under 10 hours. As such, the moons (which are very easy to see in a pair of binoculars) take on different patterns that noticeably change throughout the course of the night. In this picture, Jupiter is seen with Io (at left) and Ganymede (at right). Also note that the Great Red Spot has rotated towards the lower right in the picture below as compared to the lower left in the picture above.

Saturn is one of the original wandering stars known from ancient times. Of all the ancient planets, Saturn moved the slowest (it takes 30 years to orbit the sun once) and was associated with majesty and grandeur.

When Galileo turned his “optic tube” towards the stars, he observed the rings and drew them in his journal. His views through his first telescope (in 1610) were quiet poor. However, his observations made just over 400 years ago (in 1616), were good enough to show that Saturn was different from all the other planets.

He didn’t understand what he was seeing, but we have since learned that this planet is surrounded by an immense and spectacular ring system.

Like Jupiter, Saturn is a gas giant planet of immense size (around 120,000 km across). Its rotation rate is just over 10 hours, which compared to Earth’s 24 hour day is quite speedy.

Again like Jupiter, Saturn’s rotation rate and chemical composition have created cloud belts, although they are fainter and show less contrast then Jupiter’s.

As large as Saturn is, it is actually not very dense. If you placed the planet in a giant bathtub, it would probably float! However, because of the ring system Saturn has received its nickname as the crown jewel of the planets. Saturn’s rings are made of ice and dust particles ranging from the size of a thumbnail to a small building.

They are most likely leftover debris from the initial formation and collisions of the planets and early solar system material.

Saturn has over 62 moons and it’s believed that many of these moons help to “shepherd” the ring material into a constant orbit.

Saturn’s largest moon – Titan – is larger than Mercury and has its own atmosphere. Titan goes through its own liquid cycle. Like the Earth, it rains on Titan!

The rain pools in rivers, ponds, and lakes which then evaporate forming clouds. However, unlike the earth, Titan’s liquid cycle is made up of methane rather than water.