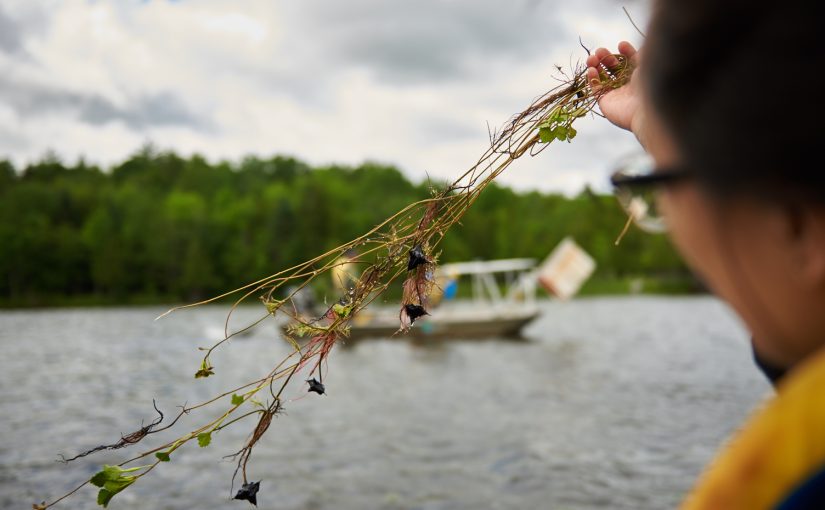 Today’s post is from Amanda Reed, a digital media organizer in our main office.

Did you know European Water Chestnut is an invasive species?

This destructive plant gained a foothold at Voyageur Provincial Park, and without the ongoing efforts of park staff, it would take over beaches and destroy our wetland.

How it got here

The European Water Chestnut originated in (surprise) Europe and, in fact, it’s considered endangered in many European countries. It arrived in North America in the late 1800s, and has only been spotted in a few spots in Ontario.

One of those spots is Voyageur Provincial Park.

Since water chestnut populations occur only in a few locations in Ontario, it is very important that we put every effort towards removing this plant before it spreads to other locations.

Invasive species are non-native species that are harmful to the environment or human health.

The reduced light penetration and plant growth beneath the water chestnut canopy, combined with a large amount of decomposing vegetation below, can lead to decreased dissolved oxygen levels, which can impact native species and even kills fish.

Its spiky nuts are a hazard to swimmers and beach-goers. In fact, it grows so thickly that — without the park’s efforts to control it — Voyageur’s beaches wouldn’t be accessible to swimmers, anglers and boaters.

But I put water chestnuts in my stir-fry!

The European Water Chestnut is completely different from the kind you put in your stir-fry. Those water chestnuts are native to Asia, not Europe.

See those spikes? They’re a sure sign that you’ve laid hands on this invasive species of water chestnut.

The inside of a European Water Chestnut is also a little messier than the kind you put in your stir fry. It looks like this: For several years, Voyageur’s staff have been working to get rid of water chestnut growing in park wetlands and the Ottawa River. People like Jean Malboeuf and Oliver Rondeau have been with the operation from the very beginning. Occasionally they travel as far as Hawkesbury to get rid of this species!

The operation starts every spring.

Staff in hip- and chest-waders pull water chestnut by hand in areas that boats can’t access. It takes a lot of patience, but progress can be made very quickly.

Water chestnut is an annual plant that overwinters as a seed. This means that preventing the current year’s plants from producing seeds will stop the infestation. Seeds can lie dormant in the river for eight to ten years, so control over several years is needed to manage the population.

The most important thing is getting the root of the water chestnut; you have to grab it at the right spot to get the seed. The team at Voyageur are pros, but it’s nearly impossible to get the root every time, so it’s an ongoing battle.

The other way to get rid of water chestnut is a lot more fun. Boats are able to rake the plants and scoop them up into nets.

Without these hard workers, the areas that you swim and boat in would all be overgrown with the pesky plant. Luckily, one part of the operation has barriers in the swimming area. If you are ever swimming in the park and see orange barriers it’s because the area has been blocked off so that water chestnuts can’t get in. This will let you swim without pricking your toes.

Is all this work paying off?

So far, Voyageur’s efforts have contained this invasive species, preventing it from spreading to other parts of the province.

By actively controlling and eventually eradicating the population, Ontario Parks is preventing the spread of water chestnut into the province’s waterways, maintaining the ecological integrity of the increasingly rare shoreline wetland habitat.

Thanks to the many hard-working staff who are pursuing a solution to this prickly problem!

Be part of the solution

While Voyageur’s staff works to eradicate this invasive species from the park, we need your help to prevent it from spreading to other areas.

This is especially important for boaters. Remember to: