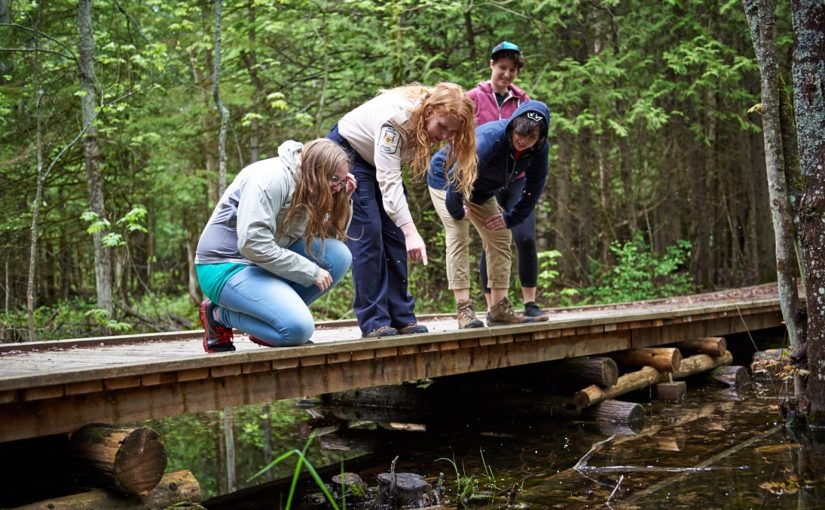 In today’s post, Amy Hall, a resource management group leader, gets us up to speed on invasive species, and shares some of the great prevention work happening at Pinery Provincial Park.

No matter what role you play in parks, you are an essential part of preventing the spread of invasive species in Ontario.

It’s Victoria Day weekend. You’re headed to your favourite provincial park to kick off the summer, and the last thing on your mind is invasive species. However, spreading invasive species through firewood is still a major threat to Ontario’s forests. A single piece of firewood can destroy millions of trees.

We ask campers to always buy firewood locally, and to burn it where you buy it.

If you’ve ever brushed up against a Common Burdock, you know how effective some plant species are in spreading their seeds. Well-meaning hikers can easily spread invasive species unknowingly by transporting seeds, spores, and even insect larvae on clothing or in boot treads. Invasive species can hitchhike from park to park, and, in some cases, even cross oceans to entirely new continents! It is important that hikers are cognizant of these threats, and are properly cleaning gear between hikes.

Pinery Provincial Park has installed boot brushes at trail heads of all hiking trails within the park to reduce invasive species dispersal. Something as easy as running your boots through a boot brush before you set off on your hike could make a world of difference to Ontario’s provincial parks!

When we think of invasive species dispersal by water, we think of large ships in large lakes or rivers. However, we also need to consider smaller watercraft like canoes and kayaks as vectors for invasion. Whether you are paddling a single kayak through small lakes and rivers, or driving a motorized boat in the Great Lakes, it’s important to properly clean your boat and boating equipment between trips.

You can help prevent the spread of Phragmites, Zebra Mussels, water chestnut, and other invasive species through responsible boating practices.

Cleaning tackle between fishing trips is an important practice to help prevent the spread of invasive species.

However, a less obvious culprit is the bait on the end of your line. At the end of a long day of fishing, many people will dump their leftover bait and soil into the water or on the nearby ground. This is problematic because it can introduce non-native species of worms, as well as other invasive seeds or microorganisms from the soil.

Here at Pinery, we created an incentive program for anglers. Return your fishing bait container (along with the soil) to the park store, and you’ll earn a free popsicle!

The Naturalist – expertise, equipment, and education

One of the best ways to prevent the spread of invasive species is to stay on trail. However, for park naturalists and resource management staff, that’s not always possible. In many cases, in order to better understand our parks and conduct ecosystem management, we must go off trail. However, Ontario Parks staff get special training and follow specific practices (like The Clean Equipment Protocol) to protect parks from invasive species.

Another way that we reduce the spread of invasive species in our parks is through education. Our Discovery staff conduct programs to teach our visitors about invasive species in parks. We design brochures and posters to go up at comfort stations and in our Visitor Centres.

Sometimes, we even write blog posts to reach visitors from afar.

Are you with us?

We hope that visitors are thinking about invasive species this week and that they carry forward these thoughts and actions each time they visit parks. If we work together, no matter what our role in parks, we can help prevent invasive species dispersal and uphold the ecological integrity of our parks and wild spaces.

Share this blog post on your favourite social media site to help us spread the word about invasive species, and inspire future heroes.