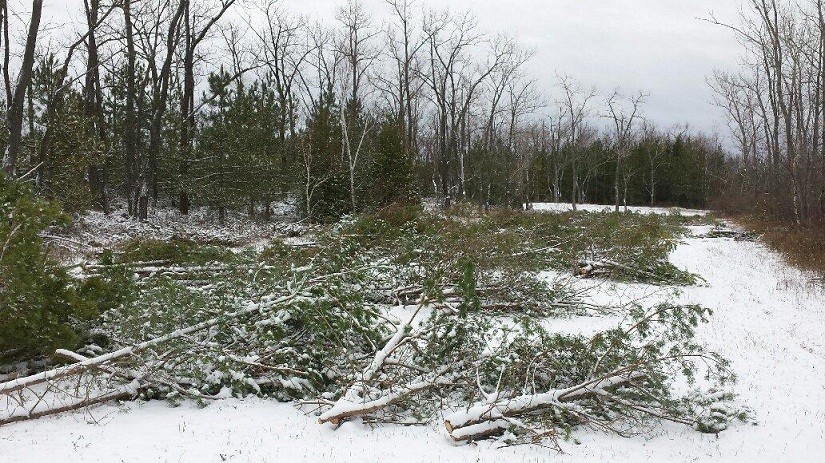 If you’ve visited Presqu’ile Provincial Park lately, you’ve probably spotted staff and volunteers cutting down happy pine trees (during the Christmas season!) and feeding them (*GASP*) into the woodchipper.

You might even have pulled over to ask, in a little Cindy-Lou Who voice: Why are you taking our Christmas tree? Why? The trees being cut and chippered are a very particular type of tree: the Scots pine.

And the Scots pine is an invasive species.

What’s the difference between a regular species and an invasive species?

So how did a Scottish tree that can grow up to 35 m tall cross the ocean?

The same way plants like rose bushes did — people brought them.

The voyages of the Scots pine

In the 1920s and 1930s, Canada had a big problem with soil erosion. After a few years of drought and a policy of clear-cutting, many areas were in serious distress.

To drive the reforestation effort, Canada brought in experts from Europe. And those forestry pros shared their top species, including the Norway spruce, the Austrian pine and — you guessed it — the Scots pine.

And it worked. The new trees helped restabilize the soil system and supported reforestation.

But it turns out, the Scots pine is a great tree, but in the wrong country. This hardy tree evolved to survive in challenging environments.

In Scotland, it had natural predators and controls. But in Canada, it was free to rampage, eagerly moving in on many sensitive Ontario ecosystems, including oak savannas, tall grass prairies, and sand dunes.

The Scots pine is also threatening…

This is the panne.

This diverse ecosystem is a G2 habitat, meaning there are very few sites like it across the globe! The panne is home to wildflowers and grasses, many of which don’t grow anywhere else. You’ll spot creatures like Wilson’s snipe or western chorus frog.

And did we mention the wildflowers.

But cue the villainous music…

…because the Scots pine is trying to colonize the panne environment, pushing out native species.

Dealing with the Scots pine invasion is tough, but fortunately, we’ve had a lot of help from our volunteers and partners.

Presqu’ile has a committed Scots pine army, including the wonderful work of the Friends of Presqu’ile. Their mission: to control Scots pine growth and remove the species entirely from sensitive locations.

These dedicated teams go in with brush saws for small trees or chain saws for big trees.

Unlike other species, Scots pine can’t regrow from their stump or roots, so chopped trees may be left where they fall as nutrients or habitat for other wildlife, or carried to the woodchipper.

Don’t worry — those trees aren’t going to waste. The woodchips from the harvested Scots pine are used on the trails throughout our parks.

So if you see our teams feeding Christmas trees into the woodchipper, don’t worry — we’re not in league with the holiday-hating Grinch.

And our teams of park staff and volunteers are getting great results. At Ferris Provincial Park, they did such a great job that not a single invasive Scots pine remains!

If that doesn’t make your nature-loving heart grow three sizes, what will?