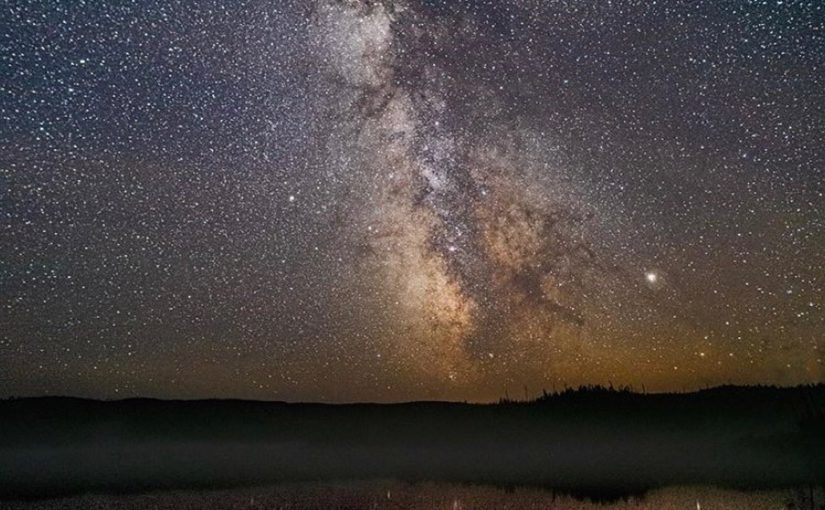 Today’s post comes from Chris Stromberg, Acting Backcountry Operations Specialist at Quetico Provincial Park and Coordinator for the Heart of the Continent Partnership.

This past July, four teams of Ontario Parks and US Forest Service wilderness rangers / park wardens went into the woods to observe the nights of the new moon.

Along with their usual assignments of ensuring compliance, clearing portages, restoring campsites, and acting as park/forest ambassadors, they were out collecting sky quality metre (SQM) readings during the darkest hours of the evening.

Quetico collaborated with our neighbours from La Verendrye Provincial Park and the Superior National Forest, and on July 29, four teams were sent in different directions through the heart of the Quetico wilderness and along the border routes of the Boundary Waters Canoe Area Wilderness (BWCAW) to obtain light metre readings for those three natural areas. Weather, cloud cover and being in the specific locations at the right times can be difficult. Unlike taking readings in an urban setting, wilderness rangers had to paddle canoes all day, each day before setting up at specified sites. They were also concerned with the chance of sleeping through the wake-up alarms!

The weather was cooperating. Although it was stormy all day on July 29, the clouds started to break before midnight and the sky completely cleared up by the darkest hour of the night.

Such dark nights compelled us to whisper

One of the participating wilderness rangers said, “It was eerie waking up and being out of the tent on such dark nights. It was so still and quiet we felt compelled to whisper even though it was unlikely another camper was on our lake.”

Six readings were taken at each site along with wind speed, cloud cover percentage, and relative humidity. Photos of the dark skies were also taken during each reading, although, it was difficult to capture the stars without better equipment.

Just minutes and one portage away, a dark sky photographer Ethan B. Allen was able to capture just what the wilderness rangers were seeing and much more with time elapsed photography. It was so exciting to discover this picture. Thank you, Ethan, for photographing our exceptional night sky and sharing it with the world.

Each night the wilderness rangers taking the light readings had to reach their destination, set up camp, and in the middle of the night, climb out of their tents to find clear starry skies for great SQM readings. Those engaged with the project have been very excited about the Heart of the Continent (HOCP) Dark Sky Initiative and it seems to be contagious with all involved. Park Warden Rachael Fairfield said, “I felt very privileged to be part of this project and had tons of fun!”

There is still significant work ahead for the parks and forest involved and HOCP and it is a long-term commitment, but undoubtedly worthy and significant. This arrangement is a continuation of the cooperation between the parks on both sides of the border that has existed for over 100 years since the Superior National Forest and Quetico Provincial Park were first protected in the early 1900s.

This continued cooperation between parks will help us work to together to successfully submit individual IDA dark sky park applications and work towards the objective of a large dark sky area.

The Heart of the Continent Partnership group has discussed becoming a certified dark sky destination for many years.

Bob DeGross, superintendent of Voyageurs National Park said, “[Our park], along with other land management areas within the Heart of the Continent geotourism region, is seeking dark sky designation through the International Dark-Sky Association. Collectively, the park, BWCAW and Quetico make up a large area with little to no light pollution impact. In fact, it’s one of the largest regions in the U.S. with some of the darkest skies.

“Additionally, maintaining this resource is beneficial to a variety of wildlife. Excessive artificial light impacts can disrupt migration, vision, foraging and dispersal patterns of a wide range of wildlife — large and small — not to mention the impact on human sleep cycles.”

The Heart of the Continent Partnership works to inclusively build vibrant and resilient communities that value and protect public lands in northwestern Ontario and northeastern Minnesota.