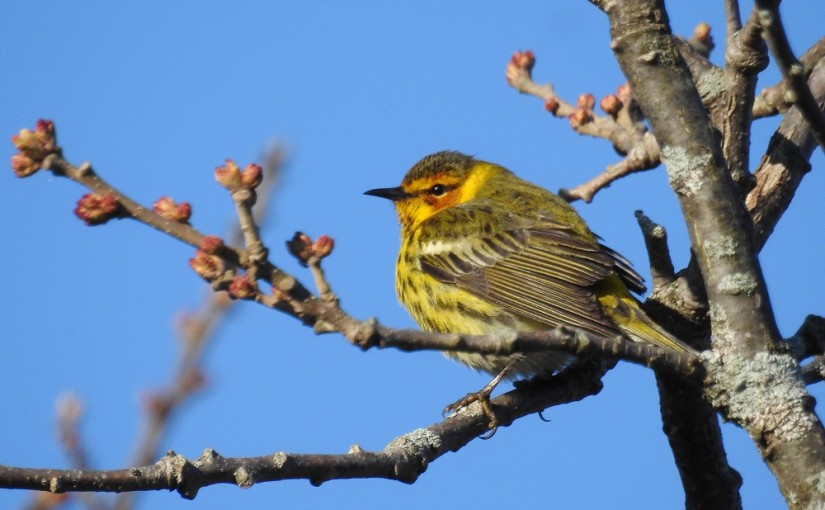 Welcome to the May installment “IBAs in provincial parks,” brought to you by Ontario IBA Coordinator Amanda Bichel of Bird Studies Canada.

Did you know Saturday (May 11, 2019) was International Migratory Bird Day! What a wonderful reason to highlight sites renowned for migrating songbirds!

Warblers, sparrows, wrens, vireos, thrushes, and more can be seen (and heard) during migration, and many stay to breed. Species at risk, including Prothonotary Warblers, Yellow-breasted Chats, and Acadian Flycatchers, also appear skulking, bouncing, or hawking around these sites.

Where are these IBAs?

The sandy, southern-deciduous habitat found at Fish Point and Lighthouse Point Provincial Nature Reserves are restricted from development, which makes them birding wonderlands. Long Point Provincial Park is part of the longest freshwater sandspit in the world. This fourth oldest park in Ontario hosts thousands of visitors each year, yet still has a rich variety of birding hotspots.

The important work of IBAs

Thanks to data meticulously collected at bird observatories, we know a great deal about bird numbers in these IBAs. Pelee Island Bird Observatory (PIBO) is located on the southeastern shore of the island, only a few kilometres from Fish Point, and has been running since 2003. Long Point Bird Observatory (LPBO), directly outside of Long Point Provincial Park, flourished into Bird Studies Canada and is the oldest bird observatory in the Western Hemisphere (it was established in 1960). Both focus on research, education, and — of course — monitoring (both are members of the Canadian Migration Monitoring Network).

PIBO has recorded 318 bird species in its short time operating, and LPBO has recorded 400! PIBO and its surrounding area host almost a third of the vascular plant species in Canada, and the only populations of Blue Racers and Lake Erie Watersnakes in the country. Recent species of excitement are American White Pelicans at PIBO, and a Brewster’s and unnamed Blue-winged / Golden-winged Warbler hybrid at LPBO.

The sheer number of birds migrating through these IBAs and provincial parks is simply remarkable!

For instance, over 900,000 Common Grackles were counted in a single day at Long Point in 2015. On Pelee Island, 15,000 Greater Scaup have been seen in one day off of Fish Point, 2.7% of their North American population.

Many nature clubs organize outings to Pelee Island and Long Point, so check with your local club. Also, wherever you’re birding in May, why not help fundraise for bird conservation by participating in the Great Canadian Birdathon (anyone is welcome to join our team the Glossy IBAses to support the conservation of IBAs across Canada).

Whatever you do, get out there and enjoy the quick, stunning pulse of migration!