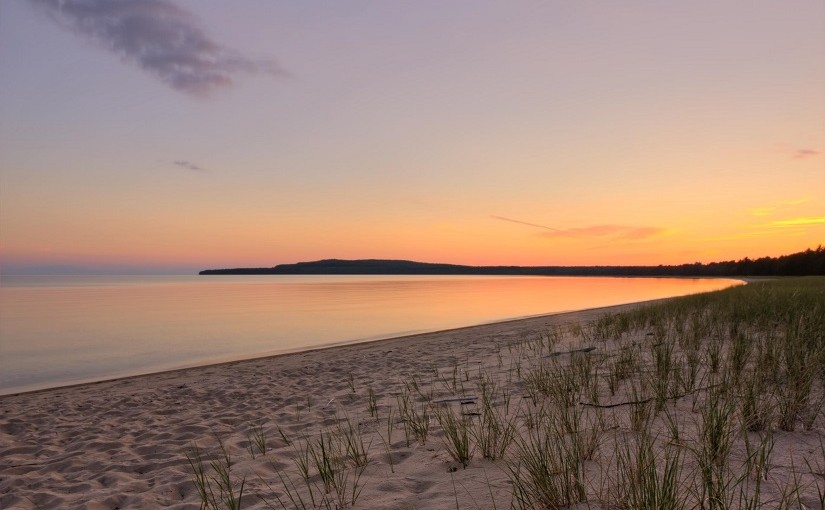 Where did the name Pancake Bay come from? The answer changes depending on who you ask.

But no matter whom you ask, the name is closely tied to the voyageurs.

The voyageurs of Pancake Bay

Voyageurs were the sons of farmers from Quebec. These stout travelers braved the shores of Lake Superior on their journey west to trade for furs.

They travelled in brigades of 4 to 20 canot du maitre (or Montréal canoes). Each canoe measured 10 metres long, and was made from birchbark and cedar planks, tied together with spruce roots and patched with a mixture of spruce gum, ash and animal fat.

Each of these huge canoes was laden with three and a half tonnes of goods for trade with Indigenous trappers.

Voyageurs paddled and portaged their big canoes from Montréal to Fort William, the inland headquarters of the North West Company at the west end of Lake Superior. There, they met other voyageurs who paddled smaller canoes (canot du Nord or North canoes), who took the trade goods to the north and west, where the furs were plentiful. The two sets of voyageurs exchanged the trade goods for packs filled with furs, which were paddled back to Montréal.

Was the bay named for its smooth beach?

The voyageurs avoided rocky shores when looking for a place to camp for the night. They greatly appreciated large sandy beaches — such as the one at Pancake Bay — because their big canoes were fragile, and could not be run into shore while loaded. Beaches allowed an entire brigade the opportunity to simultaneously unload and shore their canoes. The voyageurs hopped into the shallow water, unloaded each 40 kg pack, barrel and crate, and carried it to shore. From the vastness of Lake Superior, the white sand beach may have appeared flat and smooth like a pancake, or perhaps the water of the sheltered bay was sometimes “flat as a pancake.”

Or was the park named for the voyageurs’ diet?

The usual meal — day in, day out — for voyageurs paddling between Montréal and Fort William would have been a thick soup made of dried peas and lard. They started their day before dawn, paddling for a few hours before their first meal of the day, heating the pot of cold stodgy soup over a quickly made fire. The high fat content of this meal gave the voyageurs the calories they needed for long days (as much as 16 hours!) of paddling and portaging. Pancake Bay could often be a last stop for the voyageurs before reaching Sault Ste. Marie on their way back to Montréal.

The locals here tell stories of voyageurs mixing up their leftover stores of flour and salt to fry up some delicious galettes, a kind of fried bread similar to a pancake. Flour was a rare commodity for the voyageurs, but these stories are supplemented by a written account penned in the early 1800s by a man travelling to Fort Gary, Manitoba with a voyageur brigade. The Breton galette is most like a pancake with a savoury filling. Voyageurs would look for gull eggs to supplement their usual fare, and may have added them to the mix.

The main route of travel is no longer the Lake Superior shoreline, but Pancake Bay remains a stopping point for travelers on the Trans-Canada Highway. So in the spirit of the voyageurs, we invite you to celebrate Pancake Bay’s namesake dish next time you visit the park!